Positioned more towards professional and conventional PC users, MSI's Pro Series generally offers popular controller sets with a basic necessity approach. Both the MSI B560M Pro-VDH Wi-Fi and B560M Pro-VDH share much of the same in the way of features, while the Wi-Fi edition comes with an unspecified wireless networking controller. Both models share a black and silver patterned PCB, with small black power delivery heatsinks and a small black chipset heatsink. 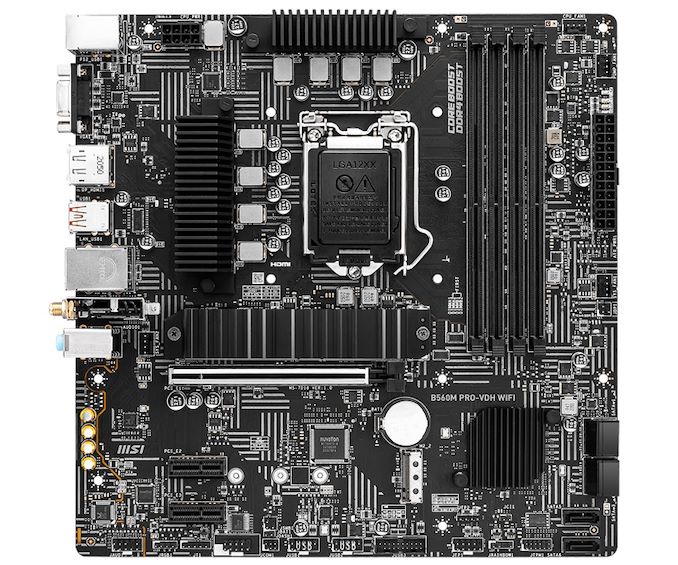 The MSI B560M Pro-VDH Wi-Fi and B560M Pro-VDH are both micro-ATX and include one full-length PCIe 4.0 x16 slot, with two PCIe 3.0 x1 slots. For storage, both models include one PCIe 4.0 x4, one PCIe 3.0 x4/SATA M.2, and six SATA ports. Four of the SATA ports have right-angled connectors, with two of them coming with straight-angled connectors, while all of the SATA support RAID 0, 1, 5, and 10 arrays. In the top right-hand corner are four memory slots, with support for up to DDR4-5066 and a total capacity of 128 GB.

Between both models, they share two USB 3.2 G2 Type-A, two USB 3.2 G1 Type-A, and two USB 2.0 ports. Both include a Realtek RTL8125 2.5 GbE controller, while the Wi-Fi version comes with an unspecified wireless interface. Powering the three 3.5 mm audio jacks is a Realtek ALC897 HD audio codec. A trio of video outputs includes one HDMI 2.0b, one DisplayPort 1.4, and one D-Sub that allow users to use Intel's integrated UHD graphics. Finishing off the rear panel is a PS/2 combo port which is designed for legacy peripherals.