The GIGABYTE B560M Aorus Pro AX is a smaller (micro-ATX) variant of the B560 Aorus Pro AX and includes much of the same feature set, well as much as the reduction in PCB allows. GIGABYTE is also offering a non-AX version, which is identical in features barring the Wi-Fi 6 CNVi. Both the B560M Aorus Pro AX and B560M Aorus Pro follow a slightly different aesthetic to the ATX version, with a black and grey printed PCB and silver heatsinks, with black highlights. GIGABYTE also includes an Aorus Falcon logo on the rear panel cover, with a more prominent logo located on the chipset heatsink. 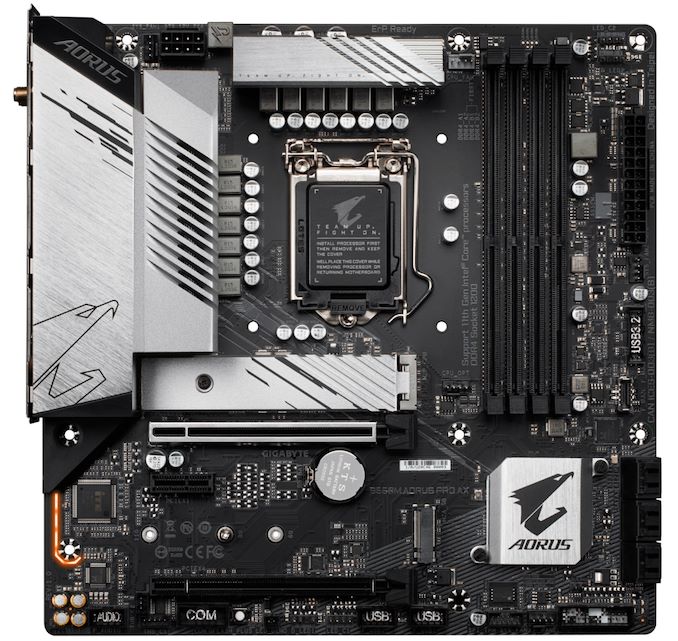 Located towards the center of the board is a pair of full-length PCIe slots, including one PCIe 4.0 x16 (top), and one PCIe 3.0 x4 (bottom) slot, a smaller PCIe 3.0 x1 located in between these. Storage options include two M.2 slots, including one PCIe 4.0 x4 slot which includes an M.2 heatsink, with a bare slot operating at PCIe 3.0 x4 and includes support for SATA drives too. Looking at SATA, GIGABYTE includes six SATA ports located in the bottom right-hand corner, with support for RAID 0, 1, 5, and 10 arrays. At the present time, GIGABYTE hasn't unveiled its memory QVL, so support is listed as DDR4-3200, with a combined capacity of up to 128 GB across four slots. GIGABYTE is also advertising a direct 12+1 power delivery.

On the rear panel,the B560M Aorus Pro AX includes an Intel AX200 Wi-Fi 6 CNVi which also adds BT 5.1 connectivity, which is the only difference between this model and the regular B560M Aorus Pro. Everything else is the same, including one USB 3.2 G2x2 Type-C, one USB 3.2 G2 Type-A, two USB 3.2 G1 Type-A, and six USB 2.0 ports. Wired networking is taken care of by an Intel I225-V 2.5 GbE controller, while six 3.5 mm audio jacks are powered by an unspecified RealtekHD audio codec. For integrated graphics users, there's one HDMI and one DisplayPort video output, with a PS/2 keyboard and mouse combination port designed for legacy peripherals.