For details on our mixed IO tests, please see the overview of our 2021 Consumer SSD Benchmark Suite.

The mixed random IO test does a great job of separating the low-end drives from the more mainstream models with TLC and DRAM. None of the DRAMless or QLC-based drives come close to the mainstream TLC NVMe drives, and only the Corsair MP400 QLC drive comes close to overall performance of the Samsung 870 EVO SATA SSD. Among the low-end drives, the Samsung SSD 980 is clearly slower than the WD Blue SN550, and less power efficient. Samsung's NVMe drives are all among the most power-hungry during this test, and the SSD 980 doesn't deliver anywhere near as much performance with that power as its high-end siblings.

On the mixed sequential IO test the SSD 980 is more competitive with most of the other low-end NVMe SSDs, and performs much closer to the mainstream NVMe drives. The NVMe Host Memory Buffer feature also seems to help a bit on this test, while it had little impact on the mixed random IO test. With its more competitive performance on this test, the SSD 980's efficiency scores are up to par.

The performance trend for the Samsung SSD 980 across the mixed random IO test is fairly flat: it can't start out with high random read performance since this test is using 80% of the drive's space—far more than the HMB can help with.

On the mixed sequential IO test, the 980 shows increasing performance as the workload gets more write-oriented, though it and the WD Blue SN550 more or less plateau once reads are less than a third of the workload. The increasing trend illustrates how caching bursts of writes is easier on the drives than handling four separate threads each reading at QD1—but the low-end drives still have clear limits to the write volume they can handle.

The Samsung SSD 980 supports most of the usual NVMe power management features and claims very fast power state transition latencies, especially for its intermediate idle state that's supposed to get it down to about 50mW. 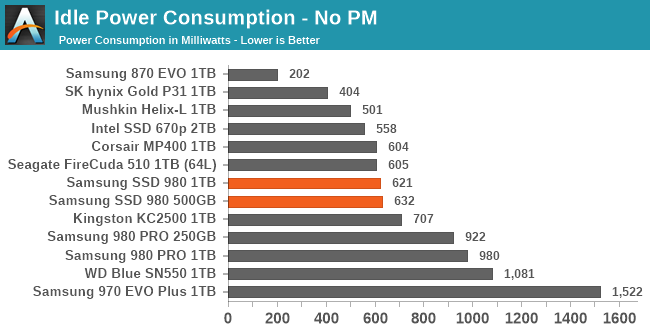 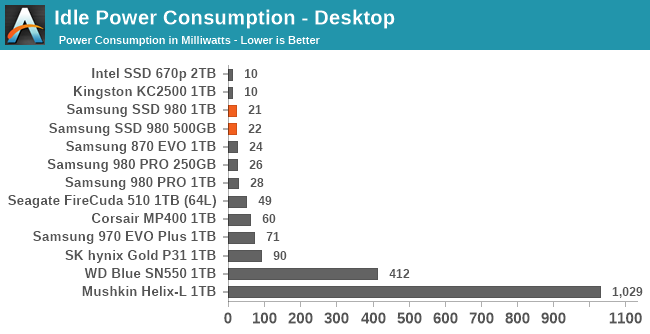 The active idle power draw of the Samsung SSD 980 is definitely lower than on Samsung's high-end NVMe drives, but given that this is a DRAMless 4-channel controller it seems like they could have done a bit better. On the other hand, the WD Blue SN550 doesn't even drop below 1W without being put into a sleep state. Both the desktop and laptop idle power draw scores look good for SSD 980. The measured wake-up latencies are a bit faster than the claimed 9ms, and in line with other Samsung NVMe drives. 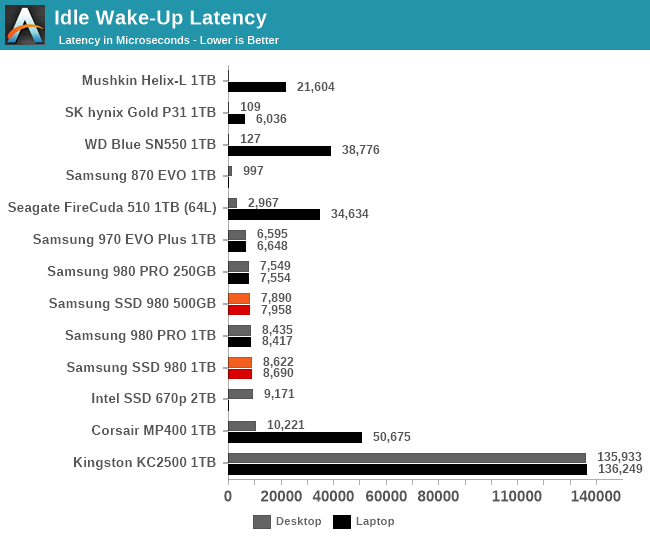