For details on our mixed IO tests, please see the overview of our 2021 Consumer SSD Benchmark Suite.

The mixed random IO test is still a significant weakness for the Intel SSD 670p; it's clearly faster than the 660p, but still far slower than either of the Phison E12-based QLC SSDs shown here (Corsair MP400, Sabrent Rocket Q). Power efficiency is consequently also poor, and the 670p falls behind even the slower Samsung 870 QVO; at least when Samsung's SATA QLC drive is being so slow, it's not using much power.

The mixed sequential IO test is a very different story: the 670p's overall performance is competitive with mainstream TLC SSDs, and even slightly higher than the HP EX950 with the SM2262EN controller. Power efficiency is also decent in this case.

The Intel 670p's performance across the mixed random IO test isn't quite as steady as the 660p, but there's still not much variation and only a slight overall downward trend in performance as the workload shifts to be more write-heavy. On the mixed sequential IO test the 670p shows a few drops where SLC cache space apparently started running low, through most of the test the 670p maintains a higher throughput than the 660p could deliver for any workload even under ideal conditions.

The Intel 670p supports the usual range of power and thermal management features. The only oddity is the exit latency listed for waking up from the deepest idle power state: 11.999 milliseconds sounds like the drive is trying to stay under some arbitrary threshold. This might be an attempt to work around the behavior of some operating system's NVMe driver and its default latency tolerance settings. 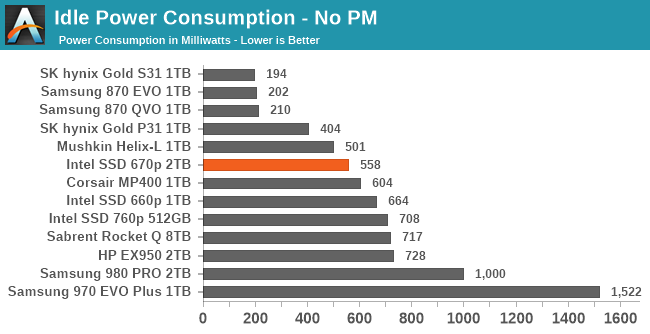 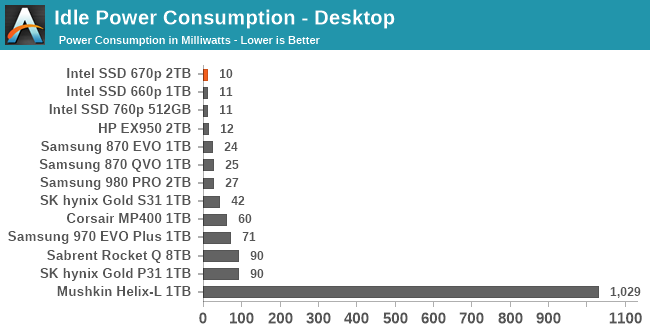 The active idle power of the 670p is clearly lower than the 660p with the SM2263 controller, but not quite as low as the Mushkin Helix-L with the DRAMless SM2263XT. So Silicon Motion has made some power optimizations with the SM2265, but it's still not in the same league as the controller SK hynix built for the Gold P31.

The desktop and laptop idle states we test have appropriately low power draw. However, when activating the laptop idle configuration (PCIe ASPM L1.2) the 670p would crash and not wake up from idle. This kind of bug is not unheard-of (especially with other Silicon Motion NVMe controllers), and the Linux NVMe driver has a list of drives that can't be trusted to work properly with their deepest idle power state enabled. Sometimes this can be narrowed down to a particular host system configuration or specific SSD firmware versions. But until now, this particular machine hasn't run into crashes with idle power modes on any of the drives we've tested, which is why we've trusted it as a good proxy for the power management behavior that can be expected from a properly-configured laptop. It's disappointing to see this problem show up once again with a new controller where the host system is almost certainly not at fault. Hopefully Intel can quickly fix this with a new firmware version. 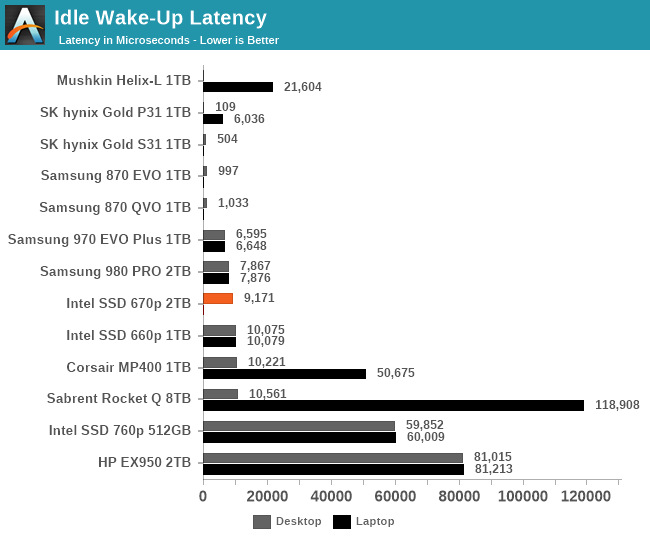