Strange Brigade is based in 1903’s Egypt, and follows a story which is very similar to that of the Mummy film franchise. This particular third-person shooter is developed by Rebellion Developments which is more widely known for games such as the Sniper Elite and Alien vs Predator series. The game follows the hunt for Seteki the Witch Queen, who has arose once again and the only ‘troop’ who can ultimately stop her. Gameplay is cooperative centric with a wide variety of different levels and many puzzles which need solving by the British colonial Secret Service agents sent to put an end to her reign of barbaric and brutality. 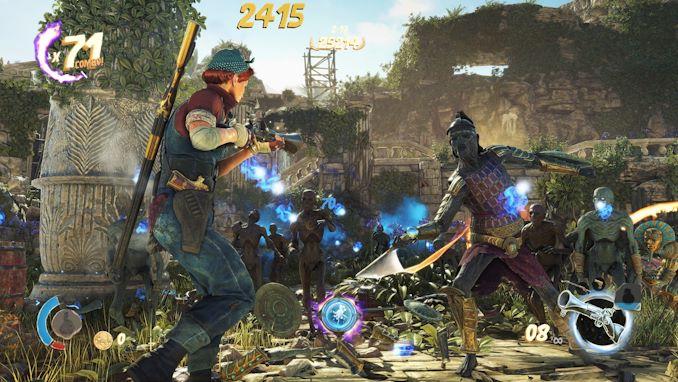 The game supports both the DirectX 12 and Vulkan APIs and houses its own built-in benchmark as an on-rails experience through the game. For quality, the game offers various options up for customization including textures, anti-aliasing, reflections, draw distance and even allows users to enable or disable motion blur, ambient occlusion and tessellation among others. Strange Brigade supports Vulkan and DX12, and so we test on both.

The automation for Strange Brigade is one of the easiest in our suite – the settings and quality can be changed by pre-prepared .ini files, and the benchmark is called via the command line. The output includes all the frame time data.