Albeit different to most of the other commonly played MMO or massively multiplayer online games, World of Tanks is set in the mid-20th century and allows players to take control of a range of military based armored vehicles. World of Tanks (WoT) is developed and published by Wargaming who are based in Belarus, with the game’s soundtrack being primarily composed by Belarusian composer Sergey Khmelevsky. The game offers multiple entry points including a free-to-play element as well as allowing players to pay a fee to open up more features. One of the most interesting things about this tank based MMO is that it achieved esports status when it debuted at the World Cyber Games back in 2012. 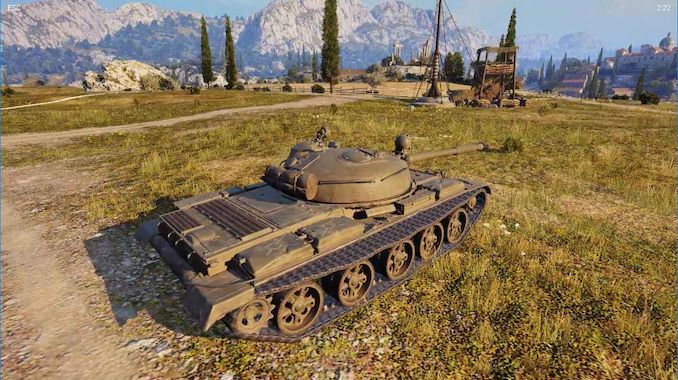 World of Tanks enCore is a demo application for its new graphics engine penned by the Wargaming development team. Over time the new core engine has been implemented into the full game upgrading the games visuals with key elements such as improved water, flora, shadows, lighting as well as other objects such as buildings. The World of Tanks enCore demo app not only offers up insight into the impending game engine changes, but allows users to check system performance to see if the new engine runs optimally on their system. There is technically a Ray Tracing version of the enCore benchmark now available, however because it can’t be deployed standalone without the installer, we decided against using it. If that gets fixed, then we can look into it.

The benchmark tool comes with a number of presets:

The odd one out is the 4K Max preset, because the benchmark doesn’t automatically have a 4K option – to get this we edit the acceptable resolutions ini file, and then we can select 4K. The benchmark outputs its own results file, with frame times, making it very easy to parse the data needed for average and percentiles.

WoT is a fun test to see 700 FPS+ numbers with the best CPUs. However the differences between the CPUs end up being minor.