In PC gaming, first person shooters get all of the attention.  The releases of Doom 3 and Half Life 2 were accompanied by a swarm of hardware upgrade guides all over the net, including those published on AnandTech.  If you were waiting for Doom 3 or Half Life 2 before upgrading your machine, you had every ounce of information at your disposal upon their release.

The same type of attention is rarely cast on other genres of games in the PC world for a handful of reasons.  For starters, FPSes are the most likely to have built-in benchmarking tools, making our ability to present you with performance data infinitely easier.  There's also a good deal of emotional attachment to anything that comes out of id Software, Epic Games or Valve, given their history with PC games - in their own way, they are the developers who brought the PC its Super Mario Brothers or Legend of Zelda.  But reasoning aside, there's much more to PC gaming than just FPSes; the best, most recent, example of an extremely successful non-fps is none other than Blizzard's foray into the Massively Multiplayer Online Role Playing realm - World of Warcraft.

MMORPGs, like World of Warcraft, rely on hordes of subscribed users (hence the massively multiplayer aspect); otherwise, they lose a big chunk of their appeal. World of Warcraft has been particularly successful in this respect.  Earlier this month, Blizzard announced that WoW had reached over 1.5 million subscribers worldwide, with over 800,000 subscribers in North America alone.  At any given time, there are over 500,000 users logged into one of Blizzard's many WoW servers at a speed of adoption never before seen in the MMORPG market.  But as we saw with the introduction of Warcraft III, anything Warcraft from Blizzard is not only well done, but turns to gold upon release.

Given the tremendous market penetration of WoW, we felt that it was time to take a look at its performance demands.  But unlike Doom 3 and Half Life 2, there is no static element of WoW gameplay - everything takes place in an ever-changing online world.  The result is that finding a repeatable benchmark to run is fairly difficult...but not impossible.  As a MMORPG, World of Warcraft doesn't depend on the razor-sharp reaction time of a fast-paced first person shooter; instead, you spend most of your time walking around performing quests and battling at a much slower pace, in a much larger, more interactive world.  As such, there are two scenarios when performance in WoW becomes an issue: when a lot of characters are present on the screen, and simply rotating the camera in the world.  The former is a virtually impossible scenario to use as a benchmark, as you can't reliably get a bunch of people to do the exact same thing at the exact same time in a repeatable fashion, but the same can't be said about scenario 2.  The world of Warcraft is truly enormous and in order to prevent overcrowding, there is a large number of servers for you to choose on which your character may play - each server has a complete copy of the Warcraft world.  Even on the highest populated servers (one of which we conducted our test), there are many areas where you can go that are devoid of any player controlled characters - making them ideal for benchmarking.  We chose one such spot in the Night Elf city of Darnassus.

The other aspect of WoW that played into our favor was the fact that exiting and returning to the game using the same character always put you in the world at the exact same place.  Equipped with FRAPS, we were able to get an extremely repeatable average frame rate out of a sequence of five full camera rotations in our chosen spot in Darnassus.  The number of rotations ensured that minor variations such as a squirrel walking across the screen would have minimal impact on the benchmark, and the results backed that up.  We found a maximum of 3% variation between runs as long as there was no disk swapping that occurred during the benchmark (more on that later).  The only downside is that our benchmark is not externally reproducible, but similar techniques can be used to achieve a similar end result.  We did have one user search us out in the world and interrupt our benchmarking by asking us if we had any linen cloth, but after a quick "no", we were back to benchmarking without being disturbed.

Graphically, WoW isn't another Doom 3 or Half Life 2; it's not pushing the limits of DirectX 9 nor is it going to knock your socks off visually.  For a MMORPG, it looks pretty good, similar to Warcraft III, but obviously much more detailed, since you are taking the perspective of a single character in the world of Warcraft, rather than controlling an army from up above.

Blizzard states the minimum GPU requirement as a GeForce 2; while a GeForce 2 will run the game just fine at lower resolutions and detail settings, it will do so at the sacrifice of a good amount of image quality.  Below, we have a comparison between a playable WoW system on a GeForce4 MX (GeForce 2 class DirectX 7 hardware) and on a Radeon X800 (DX9 hardware). You'll see a DX7 screenshot, and mouse over to see the same scene running on DX9 hardware: 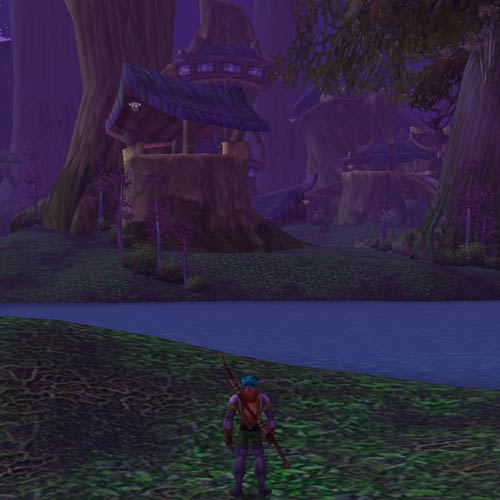 As you can see, the improvement from older hardware to newer DX9 cards is fairly significant.

The same isn't necessarily true for DirectX 8 hardware, as the GeForce4 looks just as good as the X800, just slower, in WoW.

Below, you'll see a DX8 screenshot, and mouse over the image to see the DX9 version: 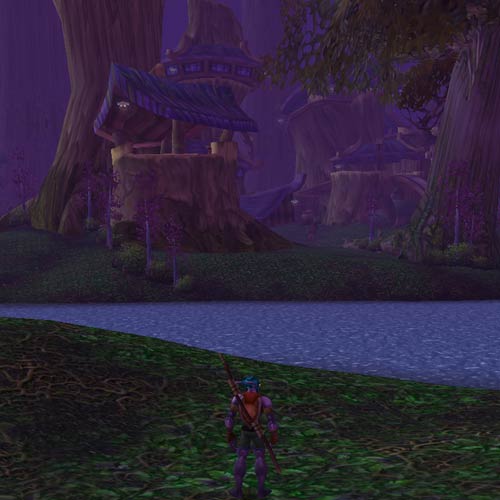 How much slower is a GeForce4 than a Radeon X800?  That comparison and many more is the subject of our first comparison...