The Tomahawk series has been well regarded as one of the most cost-effective boards when considering both features and price points. For Z590, MSI looks to have gone a slightly different route and equipped it towards the mid-range, with plenty of competitive controllers and specifications. The MSI MAG Z590 Tomahawk is advertised with a large 16-phase power delivery and follows a black and dark gray color scheme throughout. MSI has gone as far as numbering its M.2 heatsinks, which resembles a militaristic theme that is fitting, as it hails from its Arsenal gaming series. 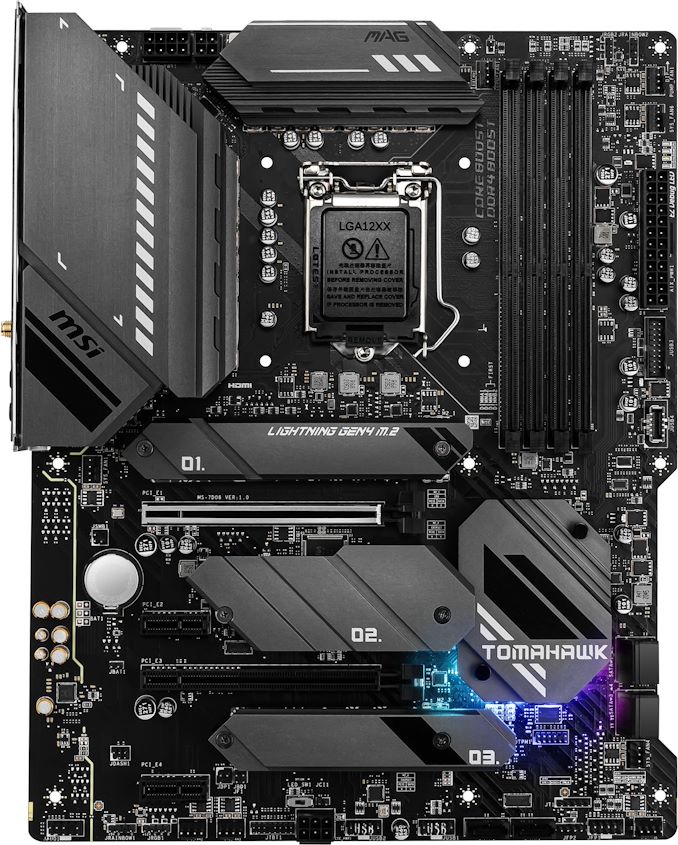 The MSI MAG Z590 Tomahawk's features include two full-length PCIe slots, with one full-length PCIe 4.0 x16, a second full-length PCIe 3.0 x4 slot, and two PCIe 3.0 x1 slots. Similar to its MPG series of boards, the Z590 Tomahawk WiFi has three M.2 slots, each with heatsinks, and includes one PCIe 4.0 x4 and two PCIe 3.0 x4/SATA slots. MSI splits up the location of the SATA ports, with four right-angled connectors in an X-shaped cutout on the PCB, with two straight-angled ports located at the bottom. All six of the SATA ports include support for RAID 0, 1, 5, and 10 arrays. Memory support is impressive, with speeds of up to DDR4-5333 and up to 128 GB of capacity across four memory slots.

MSI has set an MSRP of $239 for the MAG Z590 Tomahawk WiFi, which is more than it was for the launch of Z490. Despite this, the Tomahawk is no longer a bridge between the entry-level and the mid-range; it's a solid mid-range model. It has plenty to offer for the price, including premium 2.5 GbE and Wi-Fi 6E networking, as well as three M.2 slots and USB 3.2 G2x2 Type-C.