The MSI MEG Z590 Godlike is the flagship model from its premium MEG (MSI Extreme Gaming) series and is designed to target performance users and enthusiasts. It uses a new fresh metallic inspired design throughout, with a black PCB, black and silver styled armor, with its Dynamic Dashboard II dominating the aesthetic. The integrated OLED panel can display critical elements such as CPU VCore, CPU Core clock speed, among other useful information. The Godlike also benefits from subtle RGB LED lighting built into the large Dragon infused rear panel cover and the elegantly designed chipset heatsink. On the right-hand side, MSI includes its Dynamic Dashboard II OLED panel. 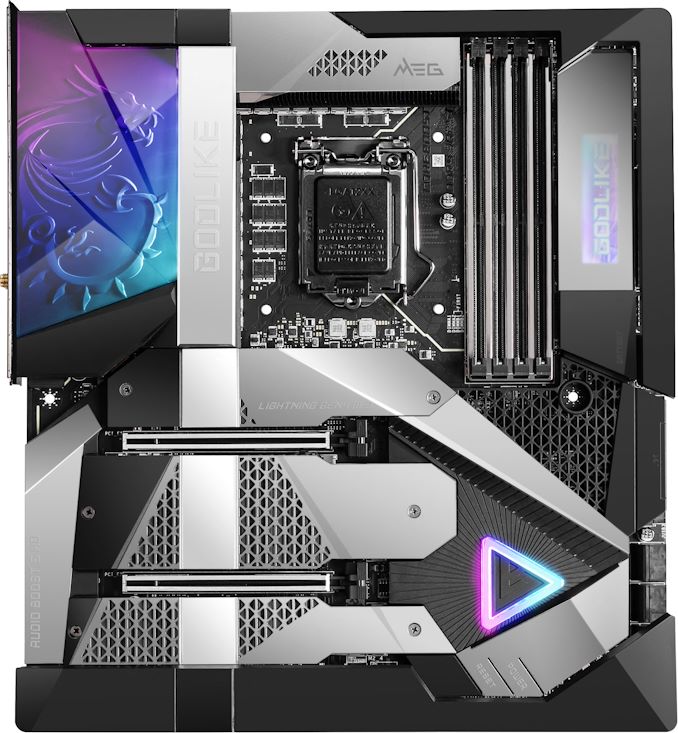 Among the waves of black and silver armor, the Z590 Godlike includes three full-length PCIe slots, with the top two of these operating at PCIe 4.0 x16 and x8/x8, with the third slot hidden by a strip of black armor electronically locked down to PCIe 3.0 x4. Offering the fastest memory support out of the box, users can install up to DDR4-5333 memory, with up to 128 GB of capacity across four memory slots. There's also plenty of storage input for users to sink their teeth into with four M.2 slots in total, including one PCIe 4.0 x4 and three PCIe 3.0 x4/SATA M.2 slots. This also includes six SATA ports with support for RAID 0, 1, 5, and 10 arrays. MSI is advertising one of its biggest desktop VRMs with its direct 20-phase power delivery.

The rear panel includes a generous selection of input and output, including two Thunderbolt 4 Type-C ports, each with its own mini DisplayPort passthrough port. Other USB connections include two USB 3.2 G2 10 Gbps Type-A and six USB 3.2 G1 Type-A ports. MSI uses a premium networking configuration on the Z590 Godlike, which includes two Ethernet ports, with one driven by Aquantia AQC107 10 GbE controller and the other by an Intel I225-V 2.5 GbE controller. The Godlike is also using Intel's latest Wi-Fi 6E CNVi, the Intel AX210. Finishing off the rear panel are five 3.5 mm audio jacks and S/PDIF optical output controlled by a Realtek ALC1220 HD audio codec, a Clear CMOS button, as well as a BIOS Flashback button.

For all the Godlike offers, MSI has set an MSRP of $1019, which is pretty standard for a flagship in the current climate (Ian: still very crazy). The accessories bundle includes MSI's Gen4 M.2 Xpander-Z M.2 add-on card, a set of DIY stands, and an MSI Tuning controller for overclockers hardcore enthusiasts. This also adds to the cost, but the MSI MEG Z590 Godlike has plenty of premium controllers with 10 GbE, Wi-Fi 6E, and it looks new instead of a direct refresh from the previous generation.