ASUS's Prime series of models have been around for multiple generations, and it's designed to offer users high-performance, with elegantly light-themed aesthetics. The ASUS Prime Z590-A ticks both of these boxes with its stunning aluminum themed design, with holographic styling on the rear panel cover and chipset heatsink. ASUS is advertising a 16-phase (14+2) power delivery and includes three M.2 slots. 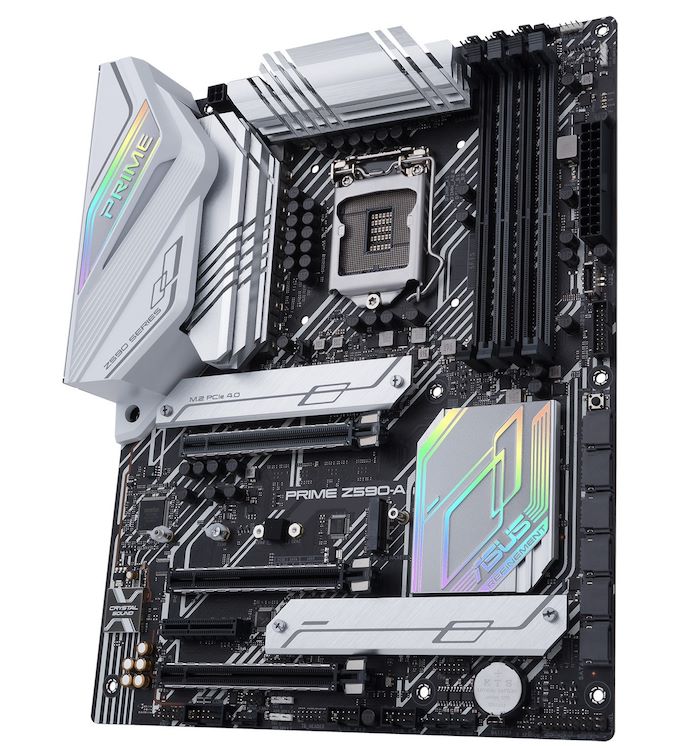 The Prime Z590-A includes three full-length PCIe slots, with the top two operating at PCIe 4.0 x16 and x8/x8, with one operating at PCIe 3.0 x4. In between the two full-length slots at the bottom is a half-length PCIe 3.0 x4 slot. For storage, the board has one PCIe 4.0 x4 M.2 slot, with two PCIe 3.0 x4/SATA M.2 slots, and six right-angled SATA ports with support for RAID 0, 1, 5, and 10 arrays. Only two out of three of the M.2 slots include a heatsink, with the middle slot reliant on good passive airflow. Prime by name, Prime by nature, as it includes a 14+2 phase power delivery with DrMOS power stages, with a large silver power delivery heatsinks and a pair of 12 V ATX CPU power inputs, one 8-pin and one 4-pin.

ASUS has included plenty of connectivity options, including a USB 3.2 G2x2 Type-C, one USB 3.2 G2 Type-C, three USB 3.2 G2 Type-A, and four USB 2.0 ports. Networking options are limited to an Intel I225-V 2.5 GbE controller, while an unspecified HD audio codec powers the five 3.5 mm audio jacks and S/PDIF optical output. Users looking to benefit from Intel's integrated HD graphics can do so with a pair of video outputs, including one DisplayPort and one HDMI.

The ASUS Prime Z590-A looks set to cost $336, which is where mid-ranged Z590 models are expected to sit. It offers a variety of features and premium controllers, including three M.2 slots, USB 3.2 G2x2 Type-C, and an Intel 2.5 GbE controller. It's not a bad price, but pricing between the time of writing and release could differ slightly.