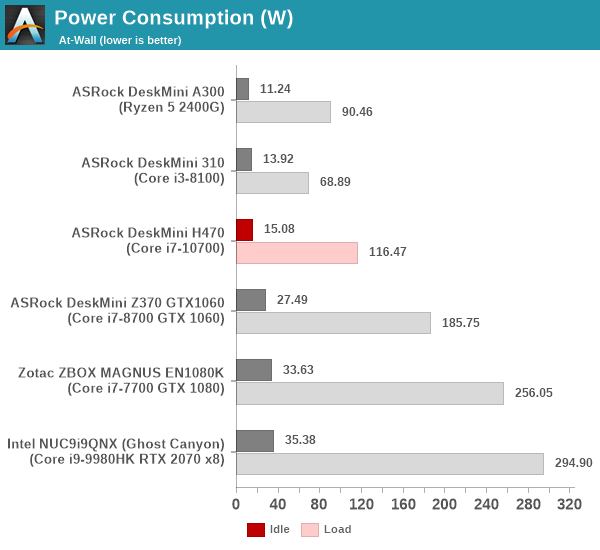 The idle power consumption can be classified into two sets - systems equipped with discrete GPUs idle at 25W+, while ones without idle aroud 10W+ lesser. Compared to other dGPU-less systems, the DeskMini H470 leads the idle numbers at 15W. On the load side too, we see it at the top of the charts in its class thanks to Intel's efforts to get as much performance as possible with suitable PL1 and PL2 numbers for its Comet Lake-S processors as the system design might allow. 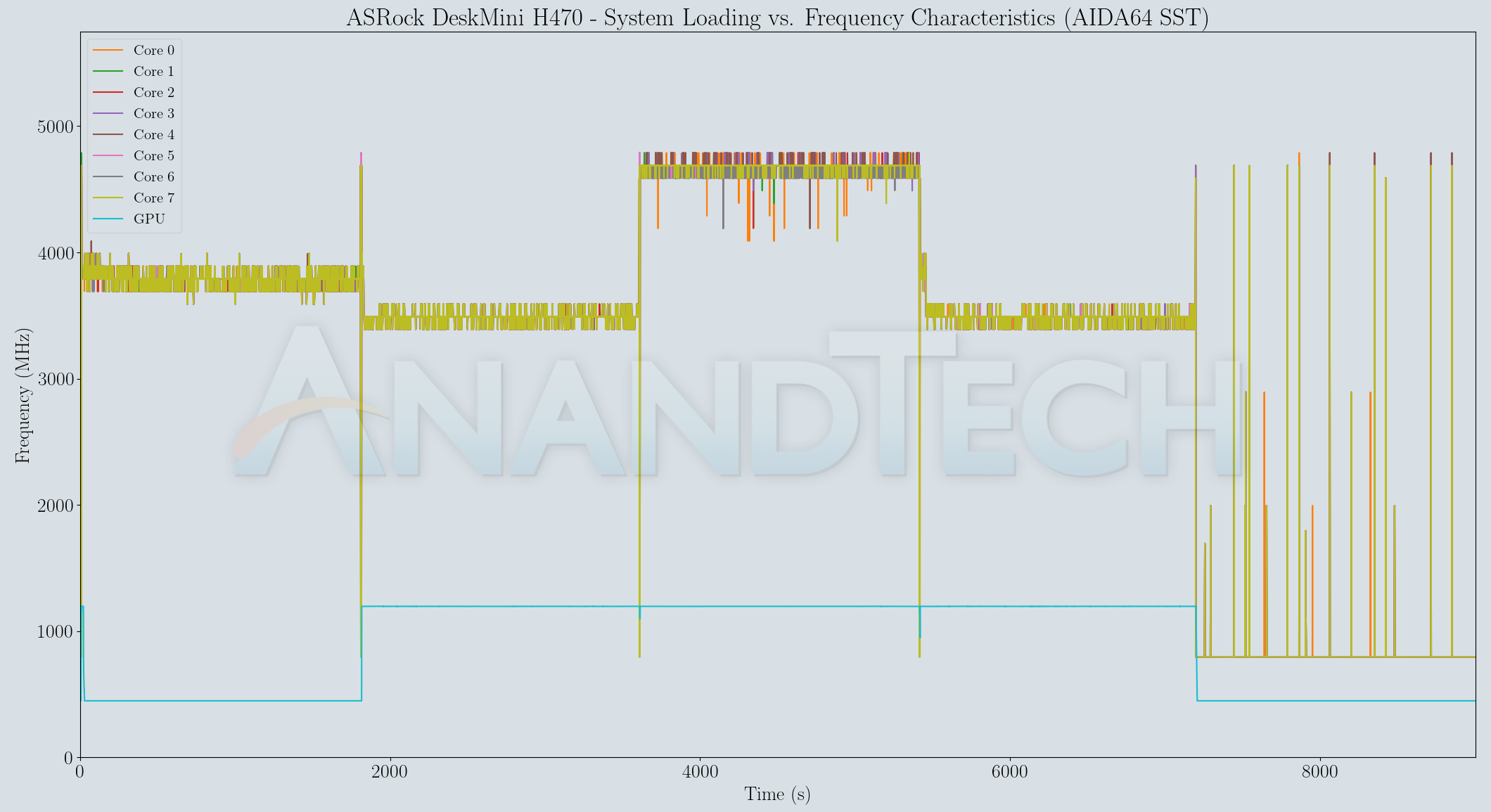 The system has no trouble keeping the package power at 65W - this is what the processor is rated for, and the DeskMini H470 configuration allows exactly that. Core clocks stay well above the rated 2.9 GHz for the most part and the GPU clock is steady during the course of the stress segments where the GPU is active. The Silverstone SST-AR11 heat-sink does wonders - the package temperature never crosses 65C! However, the absence of airflow to other components is an issue - the voltage regulators touch 100C and one of the SSD temperature sensors goes as high as 80C when the SSD is stressed. 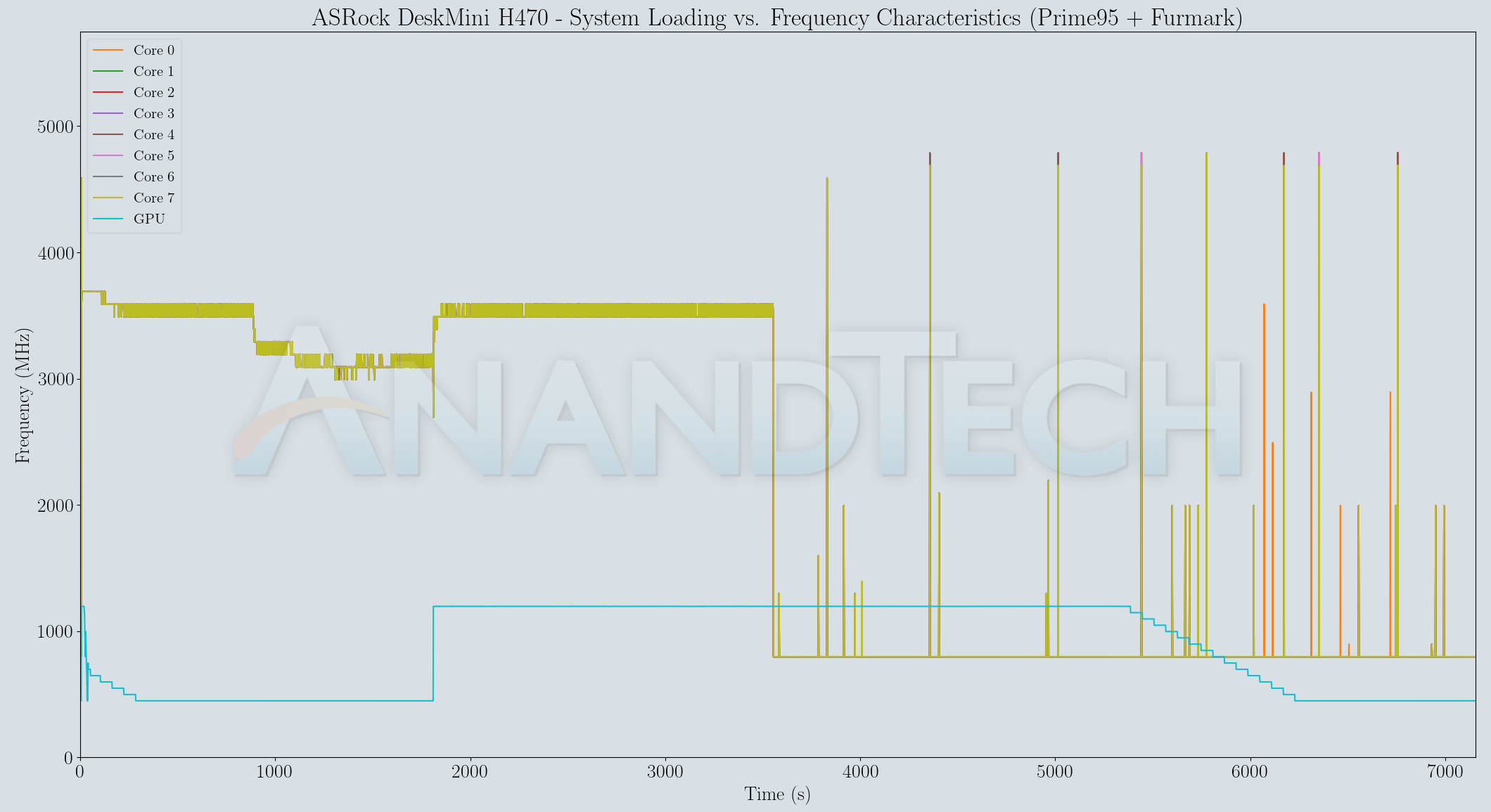 In the custom stress test involving Prime95 and Furmark, the package power consumption stays at 65W for scenarios involving the CPU. However, when the GPU alone is stressed, the number falls down to a sub-30W value. This is not due to any thermal limitations, but just the nature of the iGPU in the Core i7-10700. The GPU clock stays at the rated 1200 MHz during the full GPU-loading segment. Core clocks are also above 2.9 GHz in the first two segments. The reason for the variation / push down of the core clocks around halfway through the Prime95-only scenario is because of the temperature of the voltage regulation circuit. It shoots up as high as 105C even when the cores themselves are at 60C only.

The DeskMini H470 configuration tested above has no problems with thermal limits on the processors thanks to the excellent performance of the Silverstone SST-AR11 heat-sink. However, the case design has limited airflow as there is no other fan to cool down the SSD and/or voltage regulating circuitry. Any performance limitations are due to the thermals associated with the VRMs. While the installed CPU can do work corresponding to its rated power consumption numbers / TDP, there may be limitations on trying to extract the last bit of performance from the processor - an aspect that ASRock tries hard to deliver with features such as the 'base frequency boost' in the 'OC Tweaker' BIOS section.