Starting off with SPECint2017, we’re using the single-instance runs of the rate variants of the benchmarks.

As usual, because there are not officially submitted scores to SPEC, we’re labelling the results as “estimates” as per the SPEC rules and license.

We compile the binaries with GCC 10.2 on their respective platforms, with simple -Ofast optimisation flags and relevant architecture and machine tuning flags (-march/-mtune=Neoverse-n1 ; -march/-mtune=skylake-avx512 ; -march/-mtune=znver2).

While single-threaded performance in such large enterprise systems isn’t a very meaningful or relevant measure, given that the sockets will rarely ever be used with just 1 thread being loaded on them, it’s still an interesting figure academically, and for the few use-cases which would have such performance bottlenecks. It’s to be remembered that the EPYC and Xeon systems will clock up to respectively 3.4GHz and 4GHz under such situations, while the Ampere Altra still maintains its 3.3GHz maximum speed. 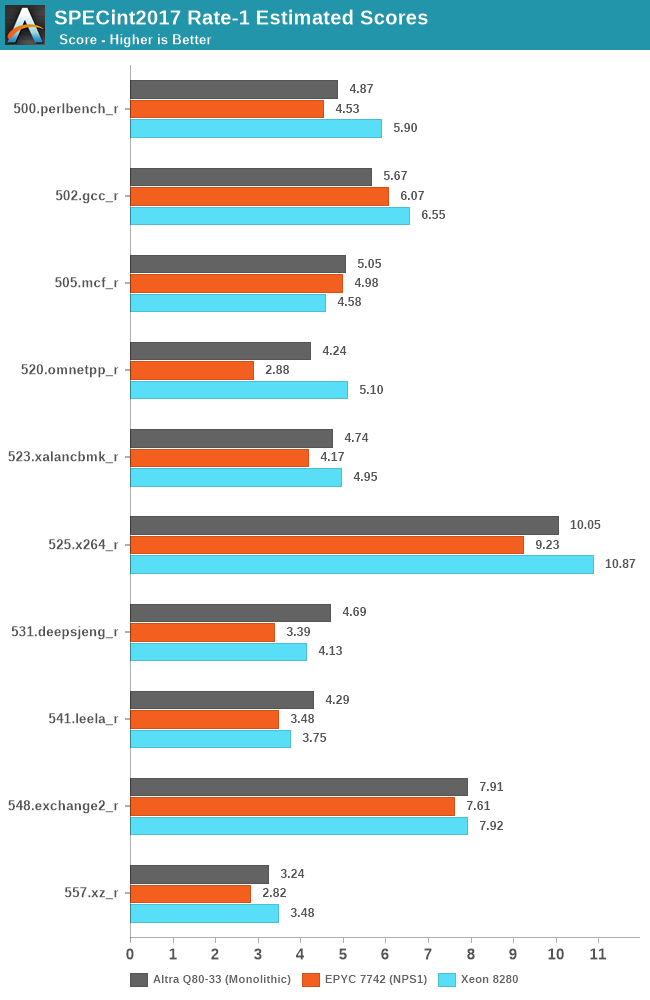 In SPECint2017, the Altra system is performing admirably and is able to generally match the performance of its counterparts, winning some workloads, while losing some others. 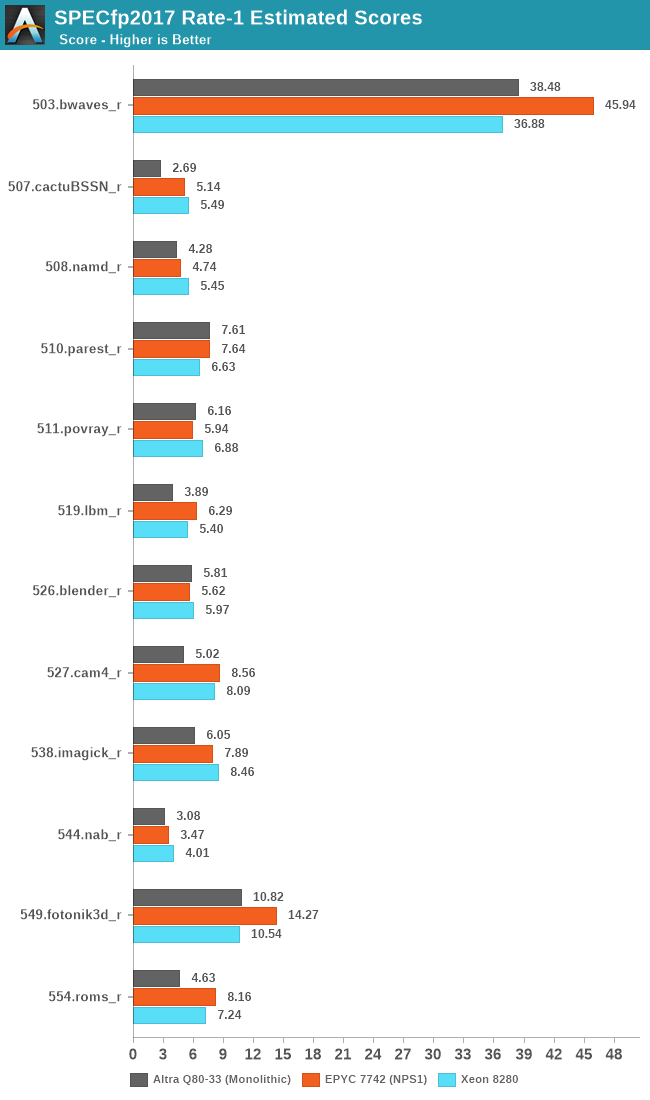 In SPECfp2017 the Neoverse-N1 cores seem to more generally fall behind their x86 counterparts. Particularly what’s odd to see is the vast discrepancy in 507.cactuBSSN_r where the Altra posts less than half the performance of the x86 cores. This is actually quite odd as the Graviton2 had scored 3.81 in the test. The workload has the highest L1D miss rate amongst the SPEC suite, so it’s possible that the neutered prefetchers on the Altra system might in some way play a more substantial role in this workload. 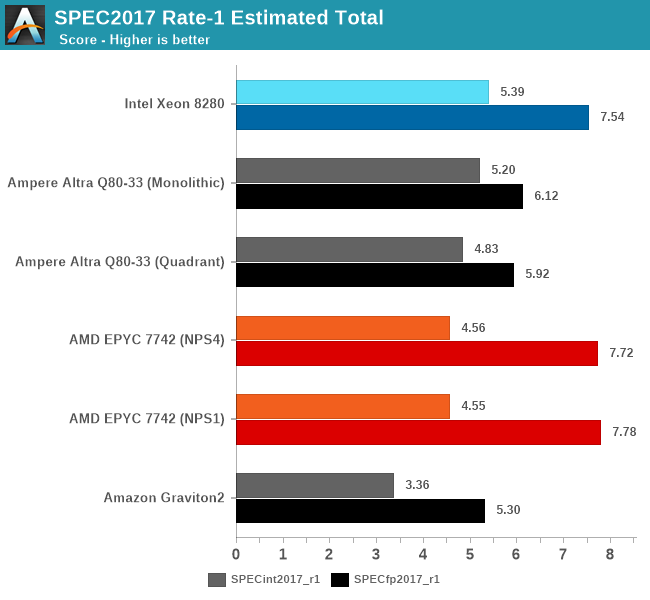 The Altra Q80-33 ends up performing extremely well and competitively against the AMD EPYC 7742 and Intel Xeon 8280, actually beating the EPYC in SPECint, although it loses by a larger margin in SPECfp. The Xeon 8280 still holds the crown here in this test due to its ability to boost up to 4GHz across two cores, clocking down to 3.8, 3.7, 3.5 and 3.3GHz beyond 2, 4, 8 and 20 cores active.

The Altra showcases a massive 52% performance lead over the Graviton2 in SPECint, which is actually beyond the expected 32% difference due to clock frequencies being at 3.3GHz versus 2.5GHz. On the other hand, the SPECfp figures are only ahead of 15% for the Altra. The prefetchers are really amongst the only thing that come to mind in regards to these differences, as the only other difference being that the Graviton2 figures were from earlier in the year on GCC 9.3. The Altra figures are definitely more reliable as we actually have our hands on the system here.

While on the AMD system the move from NPS1 to NPS4 hardly changes performance, limiting the Altra Q80-33 from a monolithic setup to a quadrant setup does incur a small performance penalty, which is unsurprising as we’re cutting the L3 into a quarter of its size for single-threaded workloads. That in itself is actually a very interesting experiment as we haven’t been able to do such a change on any prior system before.