The performance of the drives in various real-world access traces as well as synthetic workloads was brought out in the preceding sections. We also looked at the performance consistency for these cases. Power users may also be interested in performance consistency under worst-case conditions, as well as drive power consumption. The latter is also important when the drives are used with battery powered devices such as notebooks and smartphones. Pricing is also an important aspect. We analyze each of these in detail below.

Our Sequential Writes Performance Consistency Test configures the device as a raw physical disk (after deleting configured volumes). A fio workload is set up to write sequential data to the raw drive with a block size of 128K and iodepth of 32 to cover 90% of the drive capacity. The internal temperature is recorded at either end of the workload, while the instantaneous write data rate and cumulative total write data amount are recorded at 1-second intervals.

The first analysis is for the Thunderbolt 3 SSDs - no major differences were noted in the behavior when connected to the JHL6540 and JHL7540 host ports. Our DIY configuration peaks at 2400MBps+ till its SLC cache runs out, before dropping down to the 600MBps range for the rest of the workload. This actually represents the best of the lot. The Phison-based designs from Plugable and OWC perform similarly, with three distinct performance levels - 550 MBps, 150 MBps, and ~80MBps. All these drives use 3D TLC NAND, and the SLC caching behavior is quite predictable. The XTRM-Q drives, on the other hand, start off badly with 175MBps as the first level for the 4TB version and 240MBps for the 2TB version. The second level is ~75MBps (with huge variation) for both drives.

In the USB mode, the performance is much better - in fact, we can decipher the SLC cache size in this configuration. The 4TB drive is able to maintain 950MBps+ for 1033 seconds (pointing to a SLC cache of around 968GB) before settling down to ~180MBps (with significant swings between ~40MBps and ~200MBps). The 2TB drive behaves much better, though the SLC cache size is halved. It maintains 950MBps+ for 517 seconds (around 485GB SLC cache size) before settling down to a much steadier 195MBps. The worst-case temperature in the six graphs of interest turned out to be only 64C, pointing again to the effectiveness of the thermal solution.

The price of flash-based storage devices tend to fluctuate quite a bit over time. However, the relative difference between different models usually doesn't change. The table below summarizes the product links and pricing for the various units discussed in the review.

The Sabrent Rocket XTRM-Q drives are the cheapest Thunderbolt 3 SSDs in the market by a huge margin – In fact, the Plugable TBT3-NVME2TB and the OWC Envoy Pro EX TB3 2TB drives cost at least $130 more than the 2TB XTRM-Q. This is the first drive we have seen with QLC delivering the promised low-priced high-capacity SSD from a consumer perspective. The 4TB version has the same cost per GB, but its high capacity makes it a premium product with a $700 price tag.

The Sabrent Rocket XTRM-Q represents a unique product line in the market – a dual-mode SSD that can work with both Thunderbolt 3 ports and USB ports with optimal performance profiles based on the host to which the drive is connected. It is also available in capacities that no other external SSD vendor offers. These two aspects ensure that the XTRM-Q can appeal to a select audience in a way that no other offering can match. Pricing is also attractive on a $-per-GB basis, and the thermal solution is excellent. 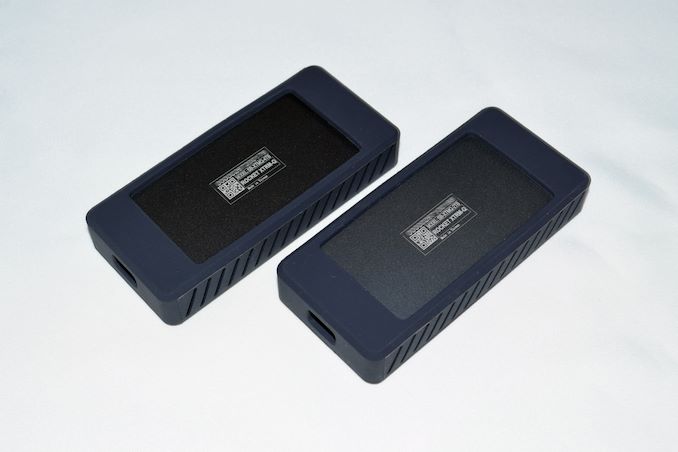 The use of QLC NAND could be a turn-off for some folks, though Sabrent has sought to address that with a liberal amount of SLC cache – almost 25% of the drive capacity. Unfortunately, there seem to be other problems – or at least quirks – on the write caching front. For medium-sized sustained writes, there's a sizable gap in performance between Thunderbolt 3 and USB modes, leaving the normally more capable Thunderbolt 3 mode at a disadvantage. This disappointing write performance in Thunderbolt 3 mode is quite puzzling – given that these slow write speeds don't occur in USB mode, it hints that SLC write caching is not being under in Thunderbolt 3 mode. But even then, our DIY configuration with the same write caching functionality turned off is able to deliver much better numbers.

Overall, although the Rocket XTRM-Q is a dual-mode drive, it has a distinct yin and yang dichotomy going on, which depends on the host type. As a Thunderbolt 3 device the drive can put up some great read speeds, which is what you'd expect with an NVMe-based drive backed by Thunderbolt 3's raw bandwidth. However write performance very clearly favors USB mode, as this is the only mode that seems to be able to take advantage of the drive's speedy SLC cache. It's strangely unbalanced performance that partially undermines what would otherwise should be the drive's biggest strength: a USB drive that's able to upgrade to Thunderbolt 3 for even better performance on compatible hosts.

Thunderbolt 3 performance aside, it's also unfortunate that the internal SSD is pretty much inaccessible. The unit as a whole is sealed shut, which means that in case of an unlikely board or bridge chip failure, the ability to recover data by attaching the internal drive to another computer is pretty much ruled out. Other than the Crucial Portable X6 and X8, we haven't seen any of the other external SSDs (with the flash and bridge chips on separate boards) keep their internal drive out of reach. Hopefully, this is an aspect that Sabrent can address in the future.

Otherwise, Sabrent would also do well to release a 3D TLC version of the dual-mode platform to address some of the shortcomings of the XTRM-Q while retaining the positives. This is likely still a generation off (we've yet to see the prerequisite 8TB TLC M.2 drives), but it would help boost the drive's minimum write performance, which it never hurts to improve on.