Earlier in the year, we overviewed the Intel W480 chipset, which came shortly after Intel launched its Comet Lake Core and Xeon W processors. Despite there not being much difference between the W480 and Z490 chipsets, at least at an architectural layout, the only real difference is in CPU support, with W480 only supporting the Xeon W-1200 series, and Z490 not supporting them. As part of that motherboard overview, the most 'traditional' design came from Supermicro with this X12SAE that we tested today. Designed more for workstation workloads than gaming, the Supermicro X12SAE has plenty of features to make it a solid offering, with two available ATX models for W480, this one, and the X12SCA-F, which includes an IPMI controller. However, we did experience a few issues that might sway this one away from general consumer use.

Despite omitting an IPMI controller on the X12SAE, it still provides plenty of functionality supported by its SuperDoctor5 utility. This allows for real-time monitoring within Windows, which is handy for a physically accessible system to run mid-level workloads. I say mid-level because LGA1200 isn't officially HEDT and is merely a professional take on Intel's refreshed 14nm architecture for Comet Lake W-series processors. The bulk of the features come natively from the chipset, with dual PCIe 3.0 x4 M.2 slots, just four SATA ports from a possible six, and dual networking with Intel i225-V 2.5 GbE and Intel's I219LM PHY offering Gigabit connectivity, as well as access to Intel's vPro and Hardware shield technology; the primary benefit of going W480. 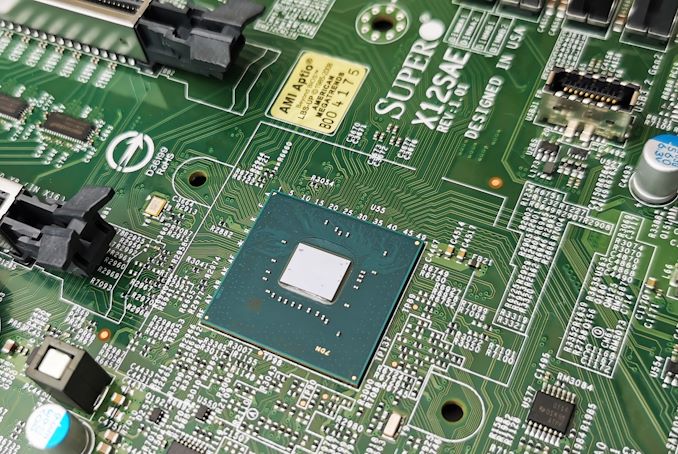 The Intel W480 Chipset on the Supermicro X12SAE

With Intel including its HD P630 integrated graphics on its W-1200 series Xeons, Supermicro takes full advantage of this with a trio of digital video outputs on the rear panel, a DisplayPort, HDMI, and DVI-I output; it's worth noting that Supermicro lists in the specifications that this is a DVI-D port, it is not. Supermicro also includes plenty of premium USB connectivity, with three USB 3.2 G2 Type-A and one USB 3.2 G2 Type-C port on the rear panel, with a single USB 3.2 G2 Type-C header located just below the four memory slots. Also present is a pair of USB 3.2 G1 Type-A ports, as well as five 3.5 mm audio jacks and S/PDIF optical output

Focusing on the memory, the Supermicro supports up to 128 GB DDR4-2933 across four slots, with both ECC and non-ECC supported with unbuffered (UDIMM) modules. We did, however, experience a slight issue with memory compatibility.

Ian first tested the board in his lab, and successfully booted the system with standard consumer memory. He very quickly noted that the memory was not running at DDR4-2933, which is the speed supported by our W-1270 processor. Upon entering the BIOS, there was no option to set the memory ratio, as there is on every other motherboard, regardless of chipset or support.

When Ian asked Supermicro, they said that it was because we were using the wrong memory, and the board did not support XMP. Ian clarified that he wasn't requesting XMP, but with a kit that should easily do DDR4-2933, he wanted the ability to set the ratio to DDR4-2933 manually. Supermicro refused, despite offering memory ratios on every other motherboard we've tested from them (consumer, workstation, and server).

We subsequently learned through trial and error that in order to get DDR4-2933 to work, we needed a memory kit that supported a JEDEC SPD profile programmed into the firmware for the memory module. This means that most consumer-grade kits are unsuitable - a standard DDR4-3200 kit these days only has two profiles: an SPD for DDR4-2133 (base) and an XMP profile for DDR4-3200.

We reached out to ADATA for some of their newest 32 GB DDR4-3200 CL22 (JEDEC) memory modules, and they were sent very quickly. Upon installing these modules, the system automatically set them to DDR4-2933 without any interaction from us. Ian then ran his Xeon W CPU tests and sent the board and ADATA memory my way for the actual board review.

I ran my tests with the ADATA memory, but I also tried using some of the DDR4 memory kits I have here. To my surprise, none of them were even able to POST. Even when I put in a single module from a standard off-the-shelf memory kit, the system would BEEP on turn-on to indicate the memory didn't work. Upon further inspection, Supermicro's memory QVL list is quite light. Users should note this. However, it should also be noted that this is a workstation motherboard model with the W480 chipset, and as such Supermicro does not QVL conventional memory kits, especially those that go beyond the maximum supported by the processor.

Knuckling down on the actual performance, the X12SAE performed well in our system tests with good, albeit expected performance in our power testing, as well as in DPC latency. We saw much slower POST times when compared to other LGA1200 models, but true workstation and server boards tend to take a while to initialize the extra controllers. In our computational section of the test suite, the X12SAE gave us the expected performance from our Xeon W-1270 testbed processor, and we have no issues that the Supermicro is on par with the rest if the W480 boards in this area.

Our Board had Issues - Perhaps Limited to Us?

After installing Windows, both Ian and I seperately noticed that Intel's networking controllers failed to initialize upon every reboot into the OS. As a result, upon every reboot, we were left without networking, unless we either (a) removed the network cable and plugged it back in, and waited 30 seconds or (b) disable/enabled the controller from the device manager. We noticed that the other review of this board on the market did not experience this issue, however STH used Linux for their testing, so it could be a Windows specific problem. There is nothing special about the controllers used on the X12SAE in that regard.

Also, as noted on the previous page, we also had a slight issue with the internal thermal sensor for the CPU. It would sometimes misread the temperature during a workload, quoting either 0ºC or -66ºC, causing the internal speaker to beep. We didn't see any reduction in performance however. This could also be down to our board being a bit off.

We know that Supermicro knows how to produce high-end workstation and server boards, and the X12SAE is no exception. It performs well with our Intel Xeon W-1270 processor, and it trades blows with the i7-10700K when you factor in the memory support. It should cost between $280 and $320 depending on the retailer, although availability is different from the Z490 consumer-based models. We've found it listed for around $350 from a seller on Amazon, although we feel this is a little too much.

Overall the Supermicro X12SAE does exactly what it should do, has a moderate but useful feature set, and benefits from its SuperDoctor5 software. The only thing missing is an IPMI controller, but if IPMI is a requirement, the X12SCA-F is essentially the same board, but with an ASPEED AST2500 included. Assuming the networking/thermal sensor issues we had were just limited to our sample, then aside from the odd way Supermicro is doing its memory QVL and options for this board, it comes across as suitable for its task.