Today’s piece was less of a review on the new Mac mini as it was testing out Apple’s new M1 chip. We’ve had very little time with the device but hopefully were able to manage to showcase the key aspects of the new chip, and boy, it’s impressive.

For years now we’ve seen Apple’s custom CPU microarchitecture in A-series phone SoCs post impressive and repeated performance jumps generation after generation, and it today’s new Apple Silicon devices are essentially the culmination of the inevitable trajectory that Apple has been on.

In terms of power, the Apple M1 inside of the new Mac mini fills up a thermal budget up to around 20-24W from the SoC side. This is still clearly a low-power design, and Apple takes advantage of that to implement it into machines such as the now fan-less Macbook Air. We haven’t had opportunity to test that device yet, but we expect the same peak performance, although with more heavy throttling once the SoC saturates the heat dissipation of that design.

In the new Macbook Pro, we expect the M1 to showcase similar, if not identical performance to what we’ve seen on the new Mac mini. Frankly, I suspect Apple could have down-sized the Mini, although we don’t exactly now the internal layout of the piece as we weren’t allowed to disassemble it. 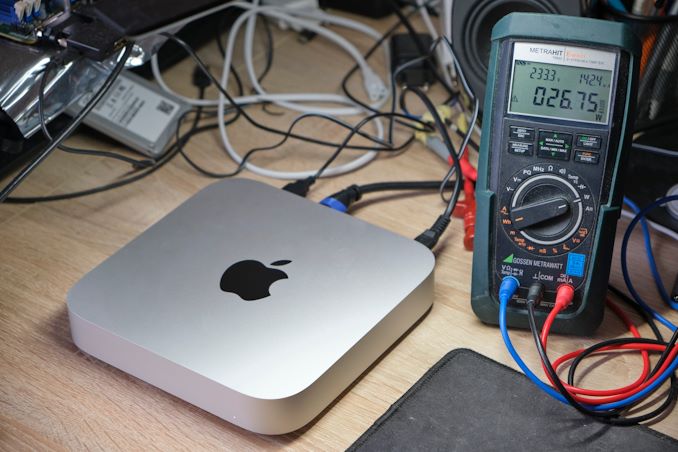 The performance of the new M1 in this “maximum performance” design with a small fan is outstandingly good. The M1 undisputedly outperforms the core performance of everything Intel has to offer, and battles it with AMD’s new Zen3, winning some, losing some. And in the mobile space in particular, there doesn’t seem to be an equivalent in either ST or MT performance – at least within the same power budgets.

What’s really important for the general public and Apple’s success is the fact that the performance of the M1 doesn’t feel any different than if  you were using a very high-end Intel or AMD CPU. Apple achieving this in-house with their own design is a paradigm shift, and in the future will allow them to achieve a certain level of software-hardware vertical integration that just hasn’t been seen before and isn’t achieved yet by anybody else.

The software side of things already look good on day 1 due to Apple’s Rosetta2. Whilst the software doesn’t offer the best the hardware can offer, with time, as developers migrate their applications to native Apple Silicon support, the ecosystem will flourish. And in the meantime, the M1 is fast enough that it can absorb the performance hit from Rosetta2 and still deliver solid performance for all but the most CPU-critical x86 applications.

For developers, the Apple Silicon Macs also represent the very first full-fledged Arm machines on the market that have few-to-no compromises. This is a massive boost not just for Apple, but for the larger Arm ecosystem and the growing Arm cloud-computing business.

Overall, Apple hit it out of the park with the M1.