We start off with SPEC2006, a legacy benchmark by now, but which still has very well understood microarchitectural behaviour for us to analyse the new Zen3 design: 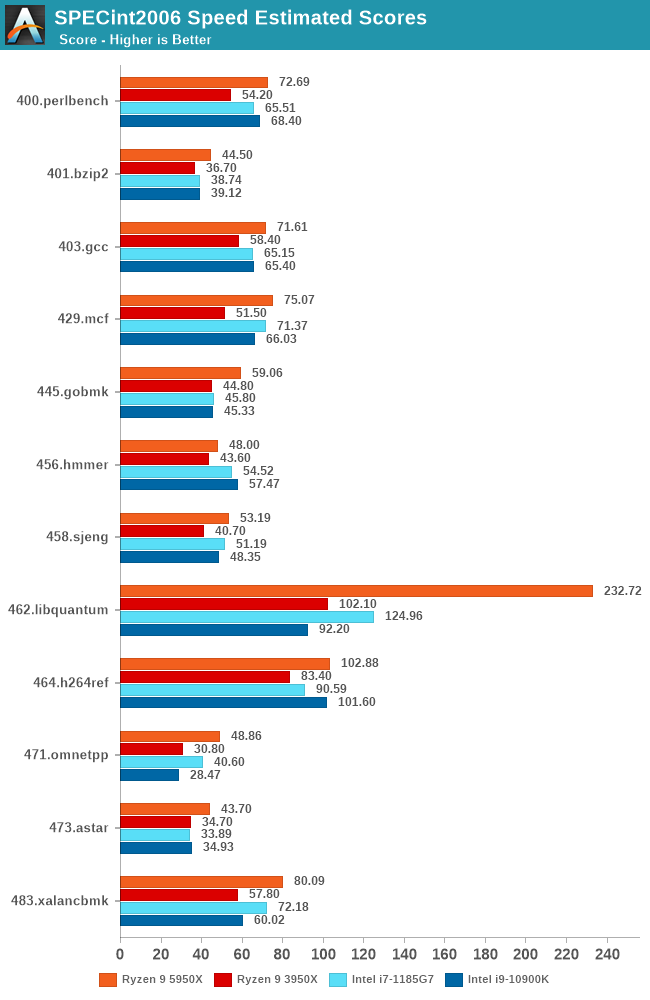 In SPECint2006, we’re seeing healthy performance upticks across the board for many of the tests. Particularly standing out is the new 462.libquantum behaviour of the Ryzen 9 5950X which is posting more than double the performance of its predecessor, likely thanks to the new much larger cache, but also the overall higher load/store throughput of the new core as well as the memory improvements of the microarchitecture.

We’re also seeing very large performance increases for 429.mcf and 471.omnetpp which are memory latency sensitive: Although the new design doesn’t actually change the structural latency to DRAM all that much, the new core’s much improved and smarter handling of memory through new cache-line replacement algorithms, new prefetchers, seem to have a large impact on these workloads.

400.perlbench is interesting as it’s not really a memory-heavy or L3 heavy workload, but instead has a lot of instruction pressure. I think that Zen3’s large boost here might be due to the new optimised OP-cache handling and optimisations as that would make the most sense out of all the changes in the new design – it’s one of the tests that has a very high L1I cache miss rate.

A simpler test that’s solely integer execution bound and sits almost solely in the L1D is 456.hmmer, and here we’re seeing only a minor uplift in performance only linear with the clock frequency increase of the new design, with only a 1% IPC uplift. Given that Zen3 doesn’t actually change its integer execution width in terms of ALUs or overall machine width, it makes sense to not see much improvements here. 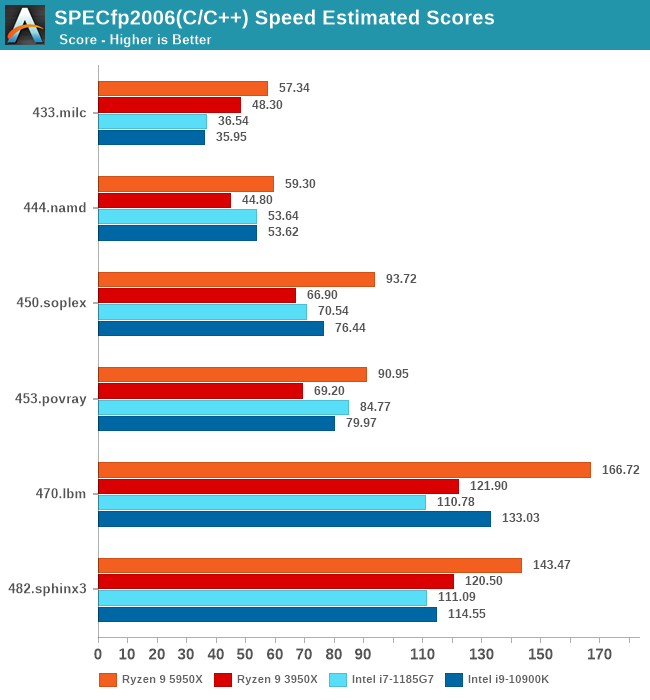 In SPECfp2006, we’re seeing more healthy boosts in performance across the board which is mostly due to the more memory intensive nature of the workloads, and we’re seeing large IPC uplifts in most tests due to the larger L3 as well as the better memory capabilities of the core. 433.milc sees a smaller uplift than the other benchmarks and that’s due to it being more DRAM memory bandwidth bound. 482.spinx is also seeing a smaller 9% IPC uplift due to it not being that memory intensive. 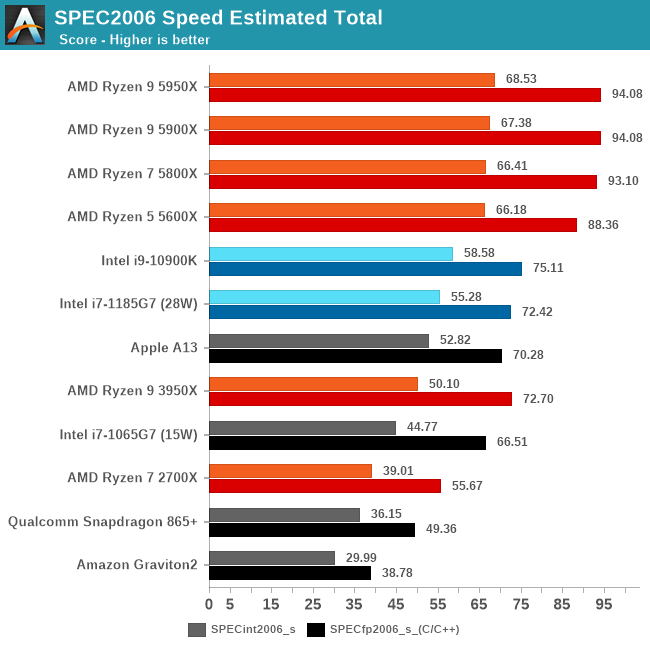 In the overall 2006 scores, the new Ryzen 5000 series parts are showcasing very large generational performance uplifts with margins well beyond that of the previous generation, as well as the nearest competition. Against the 3950X, the new 5950X is 36% faster in the integer workloads, and 29% faster in the floating-point workloads, which are both massive uplifts. AMD is also leaving Intel behind in terms of performance here with a 17% and 25% performance advantage against the 10900K. 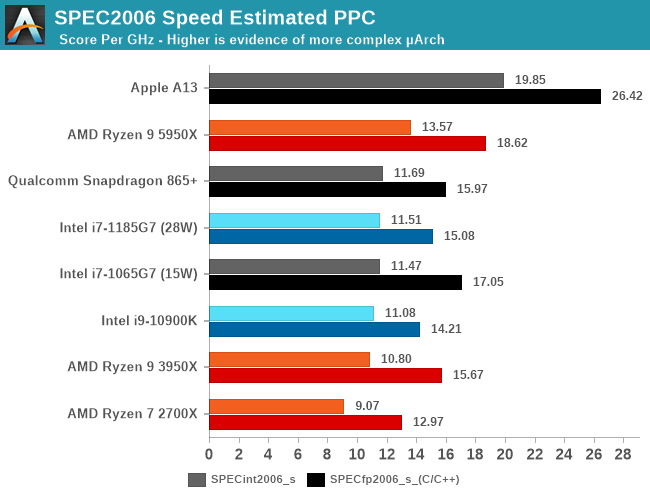 In the performance per clock uplifts, measured at peak performance, we’re seeing a 20.87% median and 24.99% average improvement for the new Zen3 microarchitecture when compared to last year’s Zen2 design. AMD is still quite behind Apple’s A13 and A14 (review coming soon), but that’s natural given the almost double the microarchitectural width of Apple’s design, running at lower frequencies. It’ll be interesting to get Apple Silicon Mac devices tested and compared against the new AMD parts. 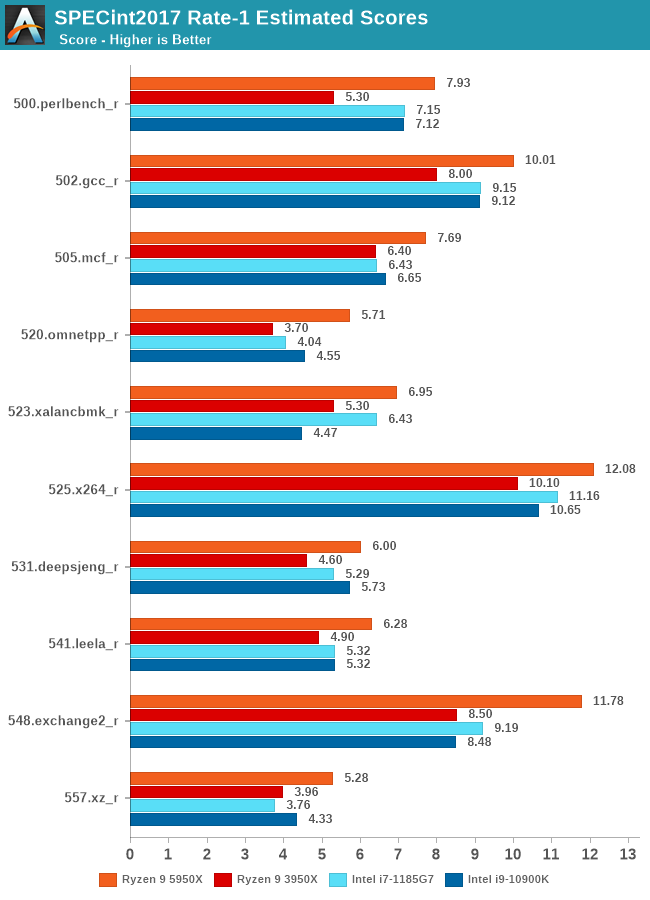 Moving onto the newer SPECint2017, we again see some large improvement of Zen3 depending on the various microarchitectural characteristics of the respective workloads. 500.perlbench_r again shows a massive 37% IPC uplift for the new architecture – again very likely to the new design and optimisations on the part of the OP-cache of the Zen3 design.

520.omnetpp again also shows a 42% IPC uplift thanks to the memory technologies employed in the new design. Execution throughput limited workloads such as 525.x264 are seeing smaller increases of 9.5% IPC due to again overall less changes on this aspect of the microarchitecture. 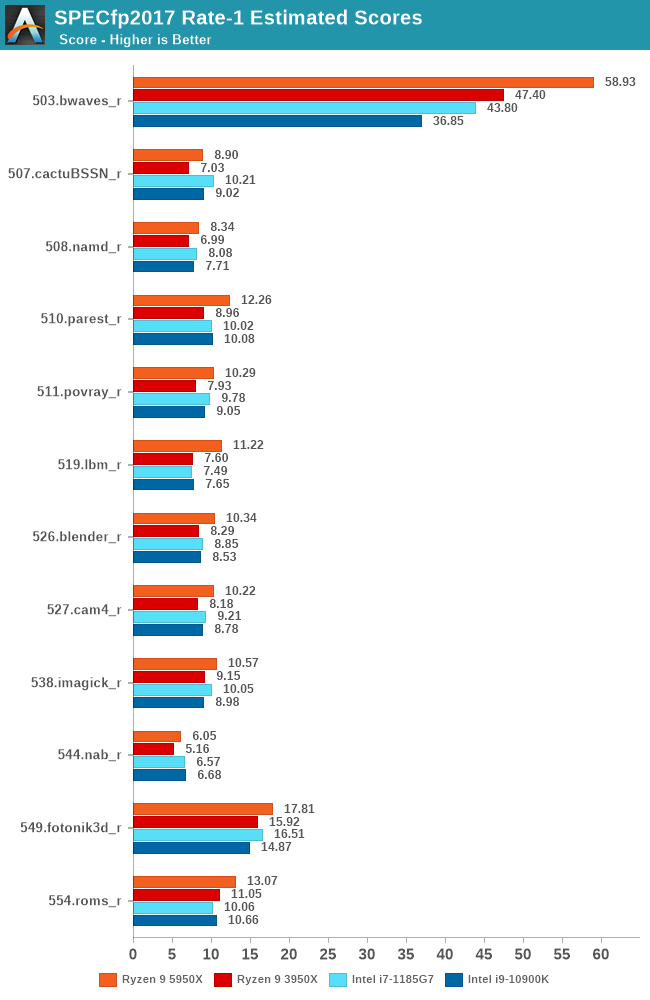 The more hybrid workloads which make good use of the caches are seeing larger performance improvements across the board. Up to a 35.6% IPC peak for 519.lbm. 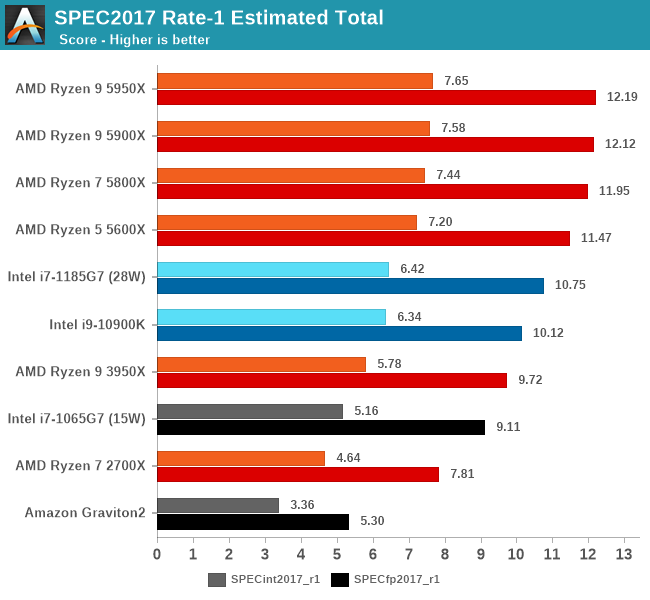 In the SPEC2017 suite total performance figures, the new Ryzen 5000 also shine thanks to their frequency and IPC uplifts. Generationally, across the int2017 and fp2017 suites, we’re seeing a 32% and 25% performance boost over the 3950X, which are very impressive figures.

IPC wise, looking at a histogram of all SPEC workloads, we’re seeing a median of 18.86%, which is very near AMD’s proclaimed 19% figure, and an average of 21.38% - although if we discount libquantum that average does go down to 19.12%. AMD’s marketing numbers are thus pretty much validated as they’ve exactly hit their proclaimed figure with the new Zen3 microarchitecture. 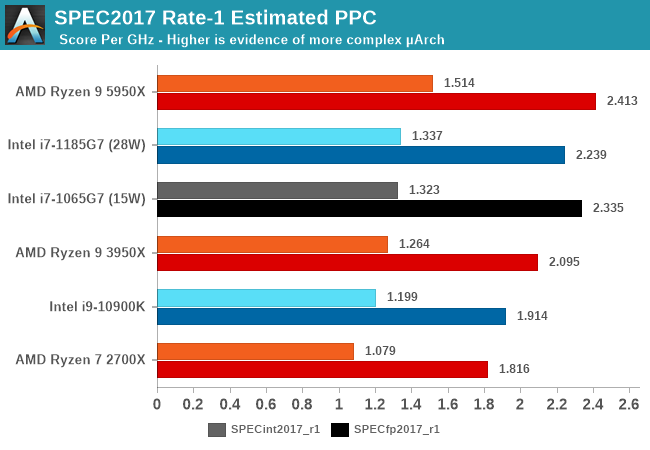 Overall, the new Ryzen 5000 series and the Zen3 microarchitecture seem like absolute winners, and there’s no dispute about them taking the performance crown. AMD has achieved this through both an uplift in frequency, as well as a notable 19% uplift thanks to a smarter design.

What I hope to see from AMD in future designs is a more aggressive push towards a wider core design with even larger IPC jumps. In workloads that are more execution bound, Zen3 isn’t all that big of an uplift. The move from a 16MB to a 32MB L3 cache isn’t something that’ll repeated any time soon in terms of improvement magnitude, and it’s also very doubtful we’ll see significant frequency uplifts with coming generations. As Moore’s Law is slowing, going wider and smarter seems to be the only way forward for advancing performance.