The Intel NUCs in general, and the Bean Canyon NUC8 series in particular, are proven solutions capable of efficiently serving multiple use-cases. Assembling the NUC is a trivial exercise, but building a passive system using the board is slightly more challenging. However, the satisfaction of seeing the NUC up and running without making even the slightest noise has to be experienced to be appreciated. Akasa's description of the build process in their installation manual (PDF) is very detailed, with the only drawback being the absence of a disassembly manual for the standard NUC kit. That aspect is one we have resolved in the section on the build process earlier in this piece. The removable front and rear I/O panels were also pointed out - these help Akasa achieve faster turnaround times for the newer NUCs. The Turing FX, for example, was release soon after the launch of the Frost Canyon NUC. 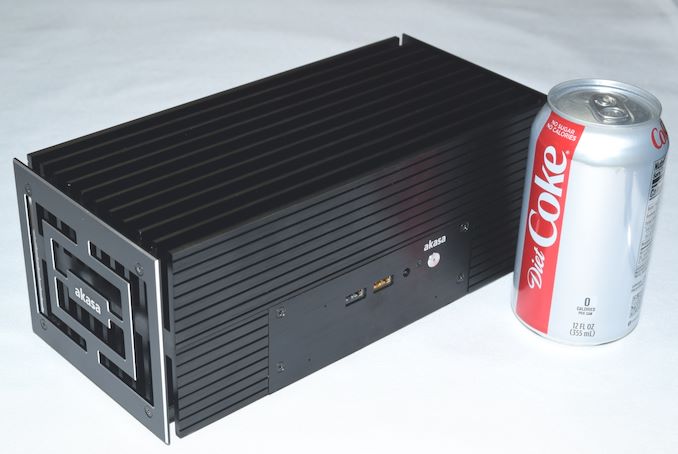 The empty chassis tips the scales at around 2.7 kgs. At 95mm x 113.5mm x 247.9mm, the physical footprint of the base (if oriented vertically) is actually smaller than that of the standard NUC kit with 2.5" drive support (117mm x 112mm x 51mm). The height is obviously around five times more to create a finned heat-sink with enough surface area to support the internal processor package's sustained 30W power consumption. In the thermal performance section, it was determined that the Akasa Turing is able to achieve this without much hassle.

The Akasa Turing is not without a few shortcomings - for example, there is no access to the microSDXC slot after the build is completed. This is in part due to the I/O placement distribution decided by Intel. In any case, attempting to insert and remove microSDXC cards from a slot in a warm or hot chassis is not advisable. Another issue is related to the absence of Wi-Fi antennae and relevant pigtails. Folks may prefer to use only wired networking for the system. Though we did not attempt to re-enable WLAN functionality in the Turing build, the following combination of pigtails and antennae should help those interested in it. The only bad performance evaluation result for the Turing build was the high SSD temperatures in the AIDA64 system stability test for the workload involving a disk stressing component. A M.2 SSD heat-sink would have come in helpful here. Akasa would do well to bundle items to help users retain the WLAN component and keep the NVMe SSD temperatures reasonable. If the assembly is being done from a pre-built NUC kit (like what was covered in this review), the consumer will also need to have cleaning alcohol or some other agent in order to scrape off the thermal paste on the package from the previous assembly. On the industrial design side, the sharp edges all around mean that the unit needs careful handling to avoid accidental cuts and bruises. In this scenario, a similar chassis with rounded edges could be a good addition to Akasa's portfolio.

The build described above has been running 24x7 for the last 12+ months servicing mainly Kodi playback from a local NAS, UHD Blu-ray playback, Netflix and YouTube streaming, and occasionally heavy browsing use as a living room HTPC. The previously deployed standard kit (which was put to similar use for a couple of weeks) was prone to ramping up its fan noise during YouTube playback with moderately active tabs in the background. Windows updates getting installed in the background used to result in a similar scenario - sometimes even with the television switched off. After the migration to the Akasa Turing chassis, the noise factor in the living room HTPC setup was completely eliminated. Under these use-case conditions (admittedly, not very stressful), the Akasa Turing build's package temperature averaged around 32C, and the chassis temperature never exceeded 30C. This excellent thermal profile was realized despite the unit being installed in a cabinet shelf (with a perforated door opening) that afforded essentially no ventilation / airflow.

With its massive heat sink chassis and solid aluminum construction, the chassis is able to keep the processor cooler than the standard kit with the fan. There is a slight reduction in the power consumption for the same workload. The design is contemporary - subjectively speaking, the unit is pleasing to look at, and doesn't need to be tucked away out of sight in a living room setting. On the pricing front, the unit contributes to almost a quarter of the eventual cost of the build, coming in at $134. That may appear as a premium to folks used to budget builds where the cost of a case and heat sink / cooling solution are negligible in the grand scheme of things. As a component that is responsible for the main attractive aspect of the build, the pricing is justfied in our opinion. All things considered, the Akasa Turing family deservedly earns our recommendation for the DIY enthusiast looking to create silent versions of the Bean Canyon and Frost Canyon NUCs.