Aopen has been a long-time player in the computer industry, and they tend to be well-known, generally well regarded, and also widely available. Aopen has a large presence in the OEM market, often manufacturing motherboards and components for other companies. The XC Cube AV that we received for review was not only one of the best looking units, but it is also one of the most full-featured.

There are actually several versions of the XC Cube AV available, although most of the differences are relatively minor. The initial version was the EA65, which used a slightly different motherboard among other things. We don't have that model in for testing, though, so we're more concerned with the EA65-II. We have the first release, which includes the Phillips MK2 TV Tuner and IntantON v1.x. There is also an EA64-IIa with the Phillips MK3 TV Tuner and InstantON v1.x. Finally, there's the EA64-IIa v2.0, which is the same as the IIa, only it includes InstantON v2.x. InstantON v2.x also supports a discrete graphics card, which we'll talk more about later.

Our understanding in talking with Aopen is that the IIa models are identical. If you purchase the IIa that does not have InstantON 2.x, then you can download the updated InstantON from Aopen. However, the earlier model - the one that we're testing - ships with a different TV tuner and cannot be upgraded to InstantON 2.x.

In terms of looks, it's hard to find fault with the XC Cube. It's a sleek looking system with a door covering the optical drive bay. The front panel lights up with various information, depending on what you're doing at the moment. Normally, it will display the time, but when watching TV or listening to the radio, it will also show appropriate information. The blue lighting goes well with the black exterior, and this case could blend in quite well with your typical entertainment system - or, if you prefer, it could actually replace a large portion of the entertainment system by itself! 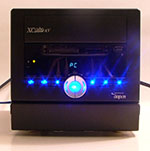 About the only fault that we can find with the looks of the unit comes from the lighting. It's rather bright by default, and while the manual states that holding the "Play/Pause" button for 5 seconds would put the system into a "night light mode", this didn't function the way we expected. "Night light" here means that it will make the display brighter, and the "night light" mode did not remain enabled. Regardless of what buttons we pressed, the display seemed to be in one of two states: moderately bright, and very bright. If you don't mind some extra light in your living room, bedroom, office, or wherever you happen to put the computer, this is a minor issue. Ideally, we would like some sort of dial or software that would allow you to tune the intensity of the lights to the desired state - something like what you find in most automobiles' dashboards. This is really only a minor flaw considering the intended use as an AV system.

The Aopen unit here is the most feature-filled SFF of any of the models that we're reviewing today, and that's saying a lot. Typical of most SFFs, the unit includes USB 2.0, Firewire, audio, and networking. Going the extra mile, the XC Cube adds S/PDIF optical input and output connections as well as an S/PDIF coaxial output; gigabit Ethernet; a 7-in-1 flash card reader; and a TV/FM tuner card. The power supply was the highest rated of this group, at 275W, so it shouldn't present a problem even with a high-end graphics card. Also included is a remote control, although its use appears to be limited to controlling the Home Theater application and the InstantON mode. We'll get to the Home Theater tool in a moment, but first, let's talk about InstantON.

To help the unit function as an actual Home Theater PC, Aopen has included a feature called InstantON. As the name suggests, this is a utility that allows the unit to boot very quickly; in this case, it boots into a mini-OS based off of Linux. InstantON was able to load up to the appropriate screen - FM, DVD/SVCD, or TV - in about 15 seconds, and switching between the screens only takes a few seconds. In practice, it works quite well. It's not the easiest interface to use, but it is equal to most cable TV interfaces. Everything can be controlled via the remote from the comfort of your couch, and the radio, TV, and DVD modes all work as advertised.

Unfortunately, there is a major problem with the design on the unit that we received: it only functions properly when using the integrated graphics port. The IIa version - or perhaps InstantON 2.x - is supposed to work with a "supported add-in card", but we were not able to verify this with our older model. That might seem like a relatively minor point against InstantON, but when you realize that the integrated graphics do not include any support for TV-Out, the problem becomes more apparent. Using InstantON, then, the unit will happily function as a HTPC... provided you connect it to a standard computer monitor. No S-VIDEO, no composite or component out, and no DVI interfaces are provided. (If you happen to have an HDTV with a VGA input, that could also be used, naturally.) The solution is to provide your own graphics card and boot into Windows, but in that case, the inclusion of the InstantON feature has been made meaningless.

Once in Windows, the included Home Theater application replaces InstantON, and functionally, they are very similar. Home Theater is developed by InterVideo, and Aopen has simply tweaked it for the InstantON mode. What is surprising to us, unfortunately, is just how slow the interface runs within Windows. We're using a 3.0GHz Pentium 4 with 1GB of high quality RAM, both with and without an add-in graphics card. There were numerous instances of pressing a button in the interface and having it not register, or a delay of a second or two. Switching between screens can take several seconds.

For an application that takes less than 100 MB of disk space, we would expect much better performance. The whole application - TV tuner, FM radio, DVD, etc. - should be able to reside in RAM with a footprint of 100 MB or so, but it apparently only keeps the active portions of the application loaded at any time, and this causes the entire interface to feel sluggish. For systems that don't have as much memory, this might be a good practice, but if the intended use is as an HTPC, we would prefer a snappier interface as opposed to more stingy use of memory.

This may all sound rather critical, but we're really picking on minor points. Remember that none of the other units even offer any of the TV tuner functionality. It's just that this SFF is so close to being a perfect HTPC that the few areas where it falls short stand out. The TV Tuner mode does function well, and in high ("best") quality recording mode, the captured MPEG-2 files are at 640x480 resolution and look very good. They're not DVD quality, but since we're recording an analog signal, we wouldn't expect that. We've provided a sample of the high quality recoding mode - a commercial from the recent Super Bowl (Warning: File size is 28MB!). Medium ("better") and Low ("good") quality recording are both less detailed, with resolutions of 352x480 and 320x240 respectively. The medium quality mode is okay for archival purposes (most media players will show the video at a 640x480 resolution, but the detail is clearly lower than the true 640x480 mode), but we would avoid it if possible and the 320x240 mode is very blurry even when viewed on a television. The file sizes are roughly 1/2 and 1/4 as large in these modes, though, so if you're trying to conserve disk space, they do allow for that. We have a couple (less entertaining) sample videos for the medium and low quality modes.

Another minor flaw with the Aopen is one that applies to nearly every SFF case that we've tested: the front headphone jack is prone to static (and we would assume the same of the front microphone jack). The rear jack is better (there is still slight static at times), but if you're going to use headphones, chances are that you'll plug them into the front jack. Unfortunately, most headphones are more capable of producing the full spectrum of audio from ~20 Hz to 20 kHz, and so high-pitched static will show up a lot more with headphones than with speakers. Since analog signals are being transmitted, static from all of the other components within the case is a very common occurrence. If you're really concerned about getting a clean audio signal, your best bet will be to use the digital S/PDIF connections - and this applies to all computer systems, not just this particular Aopen SFF.

We could do an even longer review of the Aopen unit with its various features, but we'll stop for now, since this is a roundup. One last thing to point out, though, is that there are some basic overclocking features included in the BIOS, but with our particular CPU (a 3.0 GHz engineering sample), we really can't push it very far and saw little reason to test this functionality. If you're looking for a great overclocking platform in a SFF case, you're really looking at conflicting goals, and even then, there are better overclocking platforms than socket 478 now available. We'll be covering those platforms in the near future.