Intel's Pentium M on the Desktop - A Viable Alternative?

The DFI 855GME-MGF was originally designed for a customer who needed PCI-X support, so DFI used a server version of ICH5 that provided both PCI-X and SATA support (FWE6300ESB). The server ICH obviously contributes to the price of the board, but from what we've seen, the DFI board only commands a $10 price premium over the AOpen board. 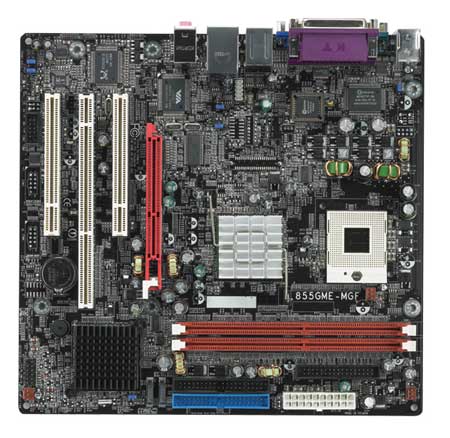 Since it's based on the 855GME chipset, the board obviously features integrated video - but the performance is nothing to write home about. Unlike AOpen's board, there's only a single 10/100/1000 GigE port, but on the 855GME-MGF, you get a single FireWire 400 port on the I/O panel as well (instead of through a separate connector).

The 855GME-MGF only needs a 20-pin ATX power connector and no auxillary 4-pin +12V connector (unlike the AOpen board). The problem with DFI's layout, however, is the placement of a capacitor next to the 20-pin ATX power connector, which means that you can't use a 24-pin PSU with the board unless you have an adapter as the capacitor that won't let the additional 4 pins overhang.

The BIOS of the 855GME-MGF is very similar to the AOpen board in terms of options, but the actual layout for overclocking in the BIOS isn't as intuitive as it was on the AOpen board. 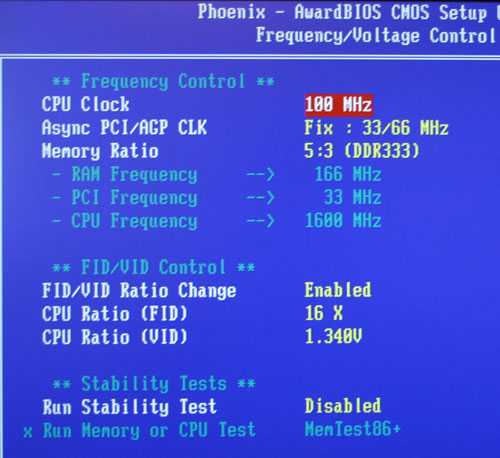 The stability of the DFI board was nothing to complain about, although it was far more sensitive to memory overclocking than the AOpen board was. When overclocked to the same levels that we were able to achieve on the AOpen board, the 855GME-MGF would randomly not POST between reboots. Usually a quick reboot would fix the problem, but it's still something that we'd rather not deal with. While we could easily hit 2.4GHz on the AOpen board, we found that 2.26GHz was the only stable overclock that we could achieve on the DFI motherboard (with all other variables, such as memory speed, the same).

The voltage adjustments are equally as disappointing on the 855GME-MGF. You can only adjust Vcore up to a maximum of 1.340V. And just like the AOpen board, although the 855GME-MGF only officially supports the 400MHz FSB, reaching 533MHz isn't a problem at all.

DFI's cooling solution is a little different from AOpen's, as they include a smaller but taller heatsink that screws on to a backplate. Both DFI and AOpen's fans were similarly quiet. AOpen's heatsink relied on thermal grease to improve heat transfer, while DFI's solution has a layer of thermal conductive material already on the base of the heatsink. The advantage to AOpen's method of just supplying thermal grease is that it's easier to reapply if you switch CPUs often, rather than the material that's present on the DFI heatsink.

Overall, the DFI is just as capable of a board as AOpen's solution, and is the only solution that offers a PCI-X slot if that matters to you. However, the BIOS layout, reduced stability when overclocking, and a slightly higher price point give the nod to AOpen for our overall recommendation.