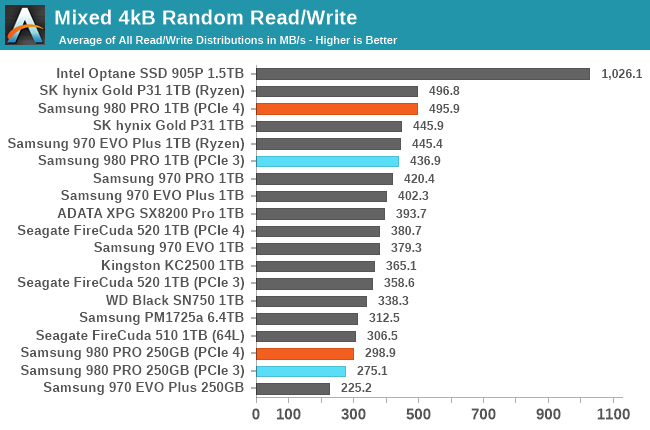 Since our mixed random IO test uses a moderate queue depth of 4, the PCIe Gen4 drives don't get much chance to flex their muscle. The overall scores are still generally bound by NAND flash latency, which doesn't vary too widely between current generation drives. There's also a small performance boost when running this test on our newer, faster Ryzen testbed. The Samsung 980 PRO is clearly an improvement over its predecessors, but is merely tied for first place among flash-based drives with the SK hynix Gold P31.

Both capacities of the 980 PRO turn in good efficiency scores for the mixed random IO test, substantially improving on Samsung's previously mediocre standing. The 1TB 980 PRO's efficiency is second only to the SK hynix Gold P31. The 980 PROs are a bit more efficient running at PCIe Gen3 speeds than on the Gen4 platform, despite the ~10% performance boost on the faster system.

There are no real surprises in the performance profiles of the 980 PROs. Both capacities show the same general behavior as earlier Samsung drives, albeit with small improvements to performance and power consumption across the board. 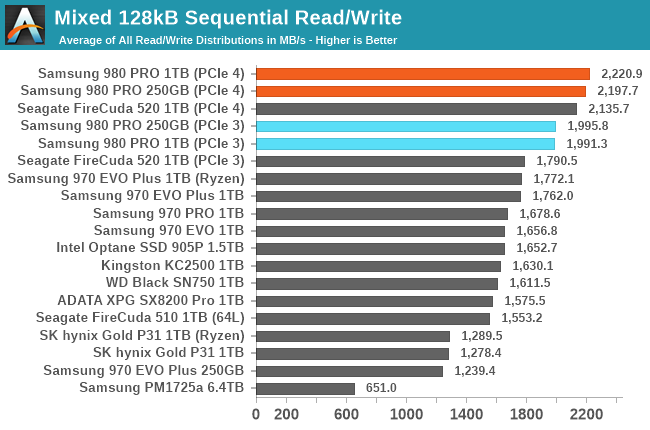 The Samsung 980 PROs take the top spots for our mixed sequential IO test, with even the 250GB 980 PRO edging out the 1TB Seagate FireCuda 520. Even when limited to PCIe Gen3, the 980s are a clear step up in performance from eariler high-end drives. The improvement for the 250GB model is the most impressive, since the 250GB 970 EVO Plus is significantly slower than most of the 1TB drives.

The 980 PROs turn in more good power efficiency numbers that place them clearly ahead of everything other than the SK hynix Gold P31. And this time, the P31's efficiency lead relatively small at no more than about 25%.