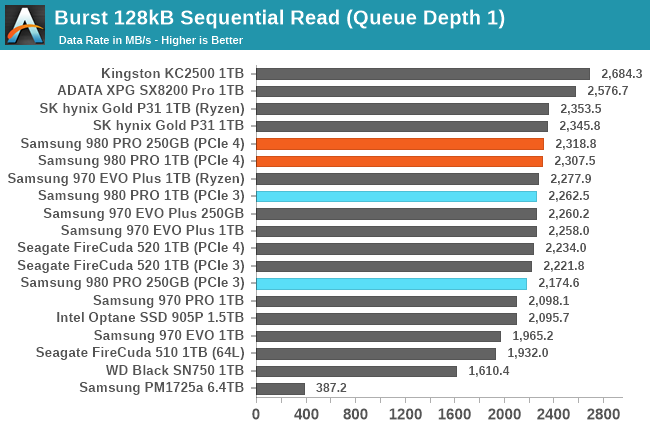 The burst sequential read performance of the Samsung 980 PRO is marginally faster than its predecessors, but the extra PCIe Gen4 bandwidth doesn't matter with a queue depth of just one. The drives using the SM2262EN controller stay on the top of this chart. 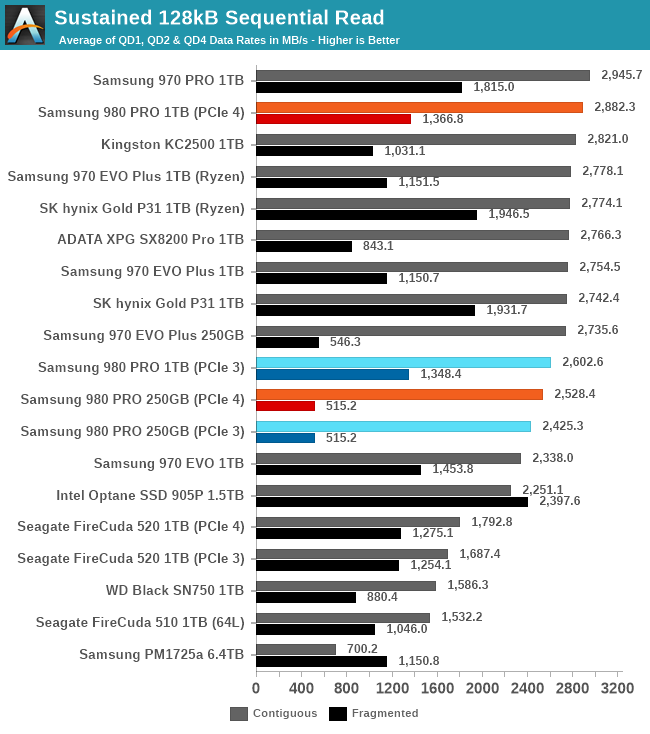 On the longer sequential read test, the 980 PRO no longer has a clear advantage over its predecessors. The 250GB 980 PRO is slightly slower than the 970 EVO Plus even on our new testbed. The 1TB 980 PRO shows slight improvement in its performance reading back data that wasn't written sequentially, but the 970 PRO and the SK hynix Gold P31 are still significantly faster for that task.

The power efficiency scores for the 980 PRO on the sequential read test are a mixed bag. Overall, the scores are still good for a high-end NVMe drive, but it doesn't consistently improve over its predecessors, and when it does score better the improvement is small.

The 980 PRO's sequential read performance doesn't saturate until around QD16: rather late in the test compared to most drives, but that's because high-end PCIe Gen3 drives have been hitting the host bandwidth limit at moderate queue depths. The 1TB 980 PRO does show decent performance scaling through the lower queue depths, taking it past the PCIe Gen3 limits by QD8. This is a clear improvement over the Phison E16-based Seagate FireCuda 520, which doesn't start gaining speed until after QD4.

The 250GB 980 PRO falters midway through the sequential read test, with performance dropping at QD4 and QD8, on both of our testbeds. At QD16 and higher it's still well above the PCIe Gen3 speed limit, but at lower queue depths it isn't an improvement over the 970 EVO Plus. 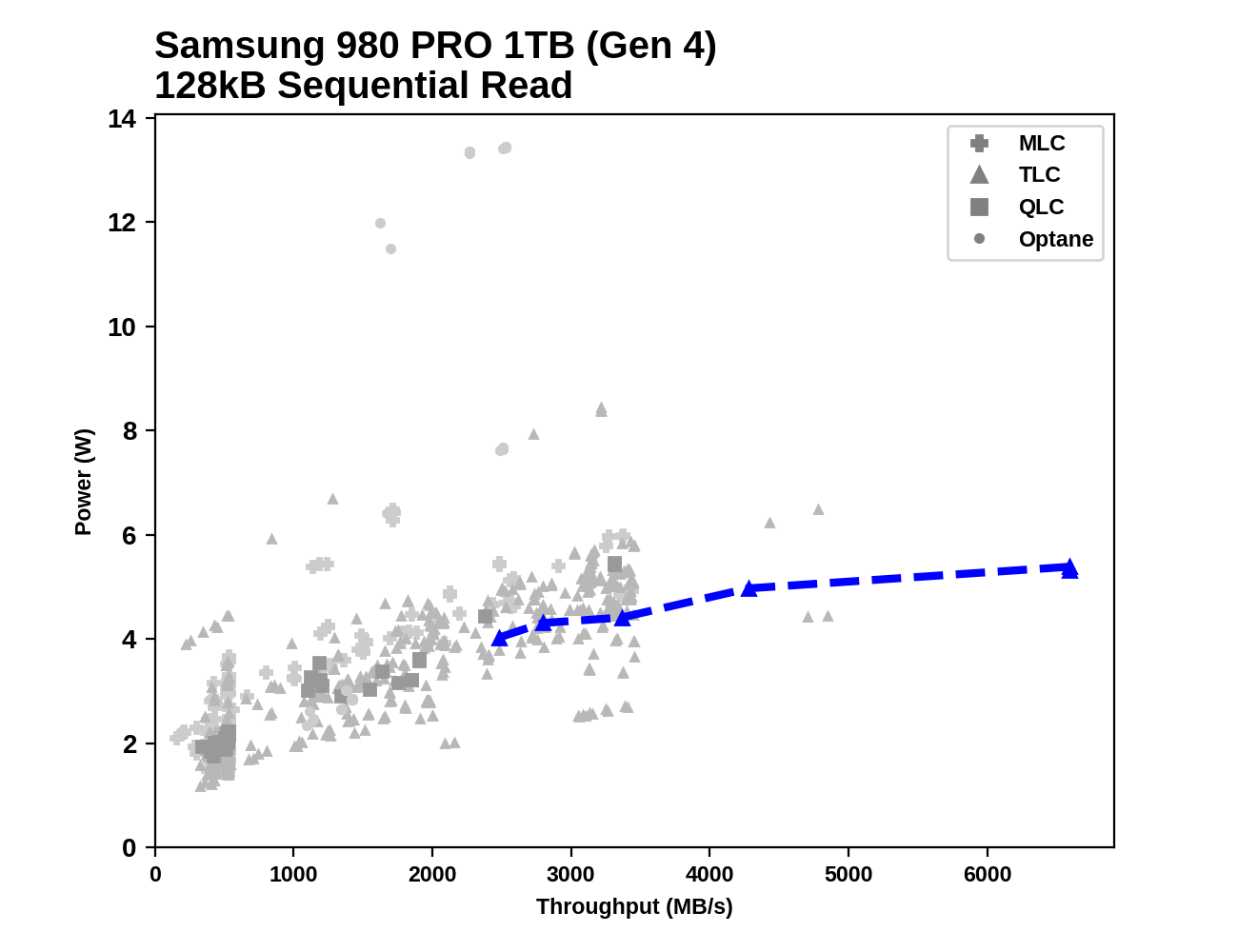 The sequential read performance of the 980 PRO—with sufficiently high queue depths—goes far beyond what's possible with PCIe Gen3, and the 1TB model stands out dramatically as significantly faster than even the Phison E16 drive. The E16 looks like an extrapolation of the high side of the general power/performance curve, but the 980 PRO blows past 6GB/s with power draw that would still be reasonable at half the speed. 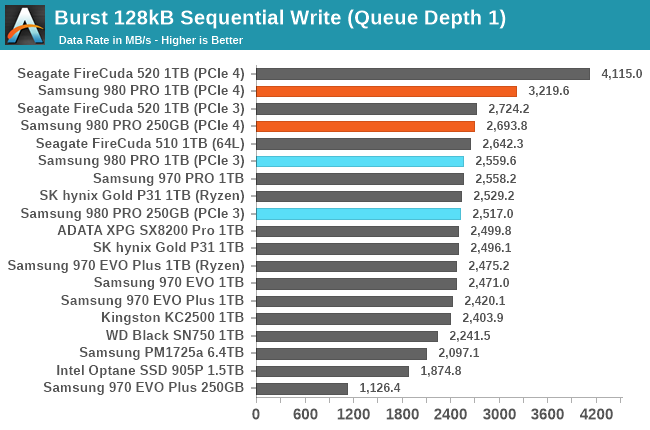 The burst sequential write speed scores for high-end NVMe drives have been fairly boring, with a narrow spread of scores for a wide variety of drives. The PCIe Gen4 drives break out of that rut and deliver real improvement to this QD1 performance, but the Phison E16-based Seagate FireCuda 520 is well ahead of the Samsung 980 PRO on this test. 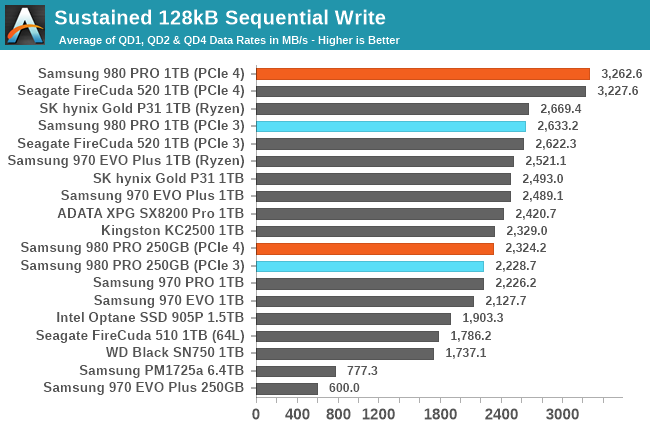 On the longer sequential write test that includes low to moderate queue depths, the 980 PRO and the Phison E16 drive end up roughly tied, with the 980 PRO only 1% ahead overall. The smaller 250GB 980 PRO is a bit on the slow side compared to most of the 1TB drives, but it's several times faster than the 250GB 970 EVO Plus thanks to the larger SLC cache.

Since the 980 PROs are able to make good use of their high performance on this test, it's not too surprising that they post good efficiency scores for sequential writes. But even when tested on a PCIe Gen3 system the 980 PROs remain significantly more efficient than the 8-channel Gen3 drives, so the 980 PROs are also doing a good job of scaling down power consumption at lower speeds.

At QD2 the 1TB 980 PRO's sequential write speed is already well above the practical limit for PCIe Gen3, but further increases in queue depth don't bring much more performance. The 980 PRO is generally a bit faster and more consistent than the Seagate FireCuda 520 on this test. The 250GB 980 PRO doesn't see any benefit from PCIe Gen4 execpt at QD1, because its SLC cache write speed doesn't come close to the PCIe Gen3 limit. Unlike the random write test, the 250GB 980 PRO makes it all the way through the sequential write test without running out of cache or experiencing a performance drop. 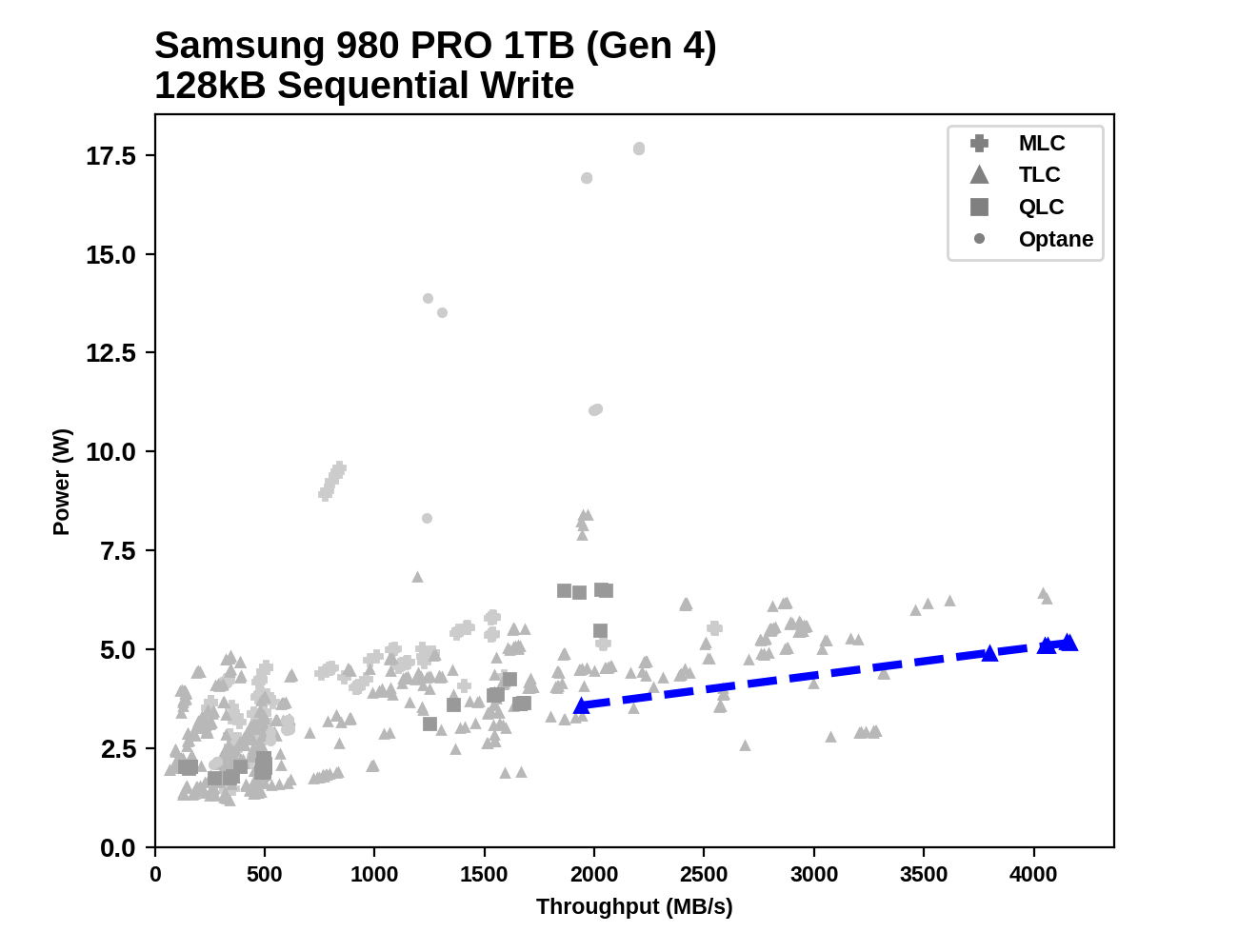 The two 1TB PCIe Gen4 drives extend the same power/performance trend set by most of the high-end Gen3 NVMe SSDs. The 980 PRO falls toward the more efficient side of that trend while the Phison E16-based Seagate drive is more power hungry and approaches the reasonable limits for M.2 drives.