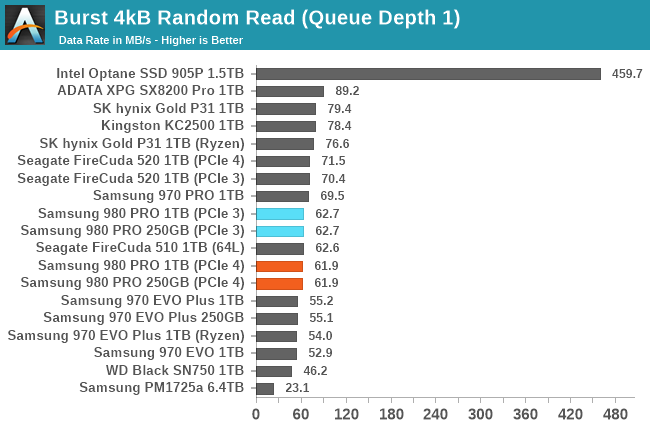 The burst random read latency of Samsung's 128L TLC as used in the 980 PRO is faster than their earlier TLC, but still lags behind some of the competition—as does their 64L MLC used in the 970 PRO. Our new Ryzen testbed consistently imposes a bit more overhead on drives than our older Skylake-based testbed, and PCIe Gen4 bandwidth is no help here. 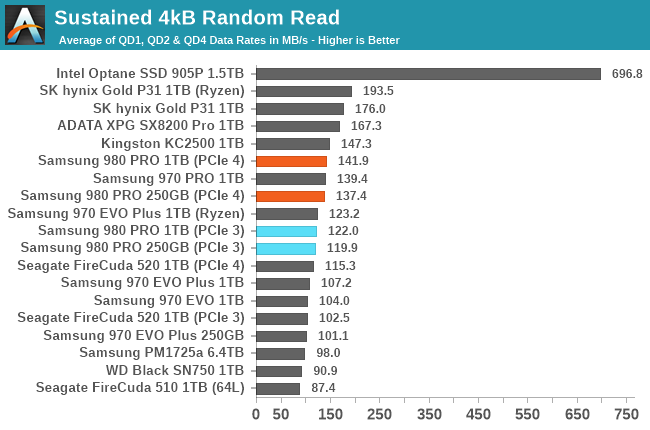 On the longer random read test that adds in some slightly higher queue depths, the 980 PRO catches up to the 970 PRO's performance while the Phison-based Seagate drives fall behind. The SK hynix drive and the two drives with the Silicon Motion SM2262EN controller remain the fastest flash-based drives. Our Ryzen testbed has a slight advantage over the old Skylake testbed here, but it's due to the faster CPU rather than the extra PCIe bandwidth: the PCIe Gen3 drives benefit as well.

Samsung's power efficiency on the random read test is clearly improved with the new NAND and the 8nm Elpis controller, but that really only brings the 980 PRO's efficiency up to par at best. The SMI-based drives from Kingston and ADATA are a bit more efficient, and the SK hynix Gold P31 with its extremely efficient 4-channel controller is still far beyond the 8-channel competitors.

Compared to the 970 EVO Plus, the 980 PRO's random read performance is increased across the board and power consumption is reduced, but the differences are slight. The 980 PRO's improvement is greatest at the highest queue depths we test, and running on our new Ryzen testbed helps a bit more—but the PCIe 3 SK hynix Gold P31 gets most of the same benefits at high queue depths and matches the QD32 random read throughput of the 980 PRO. We would need to use multiple CPU cores for this test in order to reach the performance levels where the 980 PRO could build a big lead over the Gen3 drives. The 250GB model shows more significant improvement than the 1TB model, but again this is mainly at high queue depths. 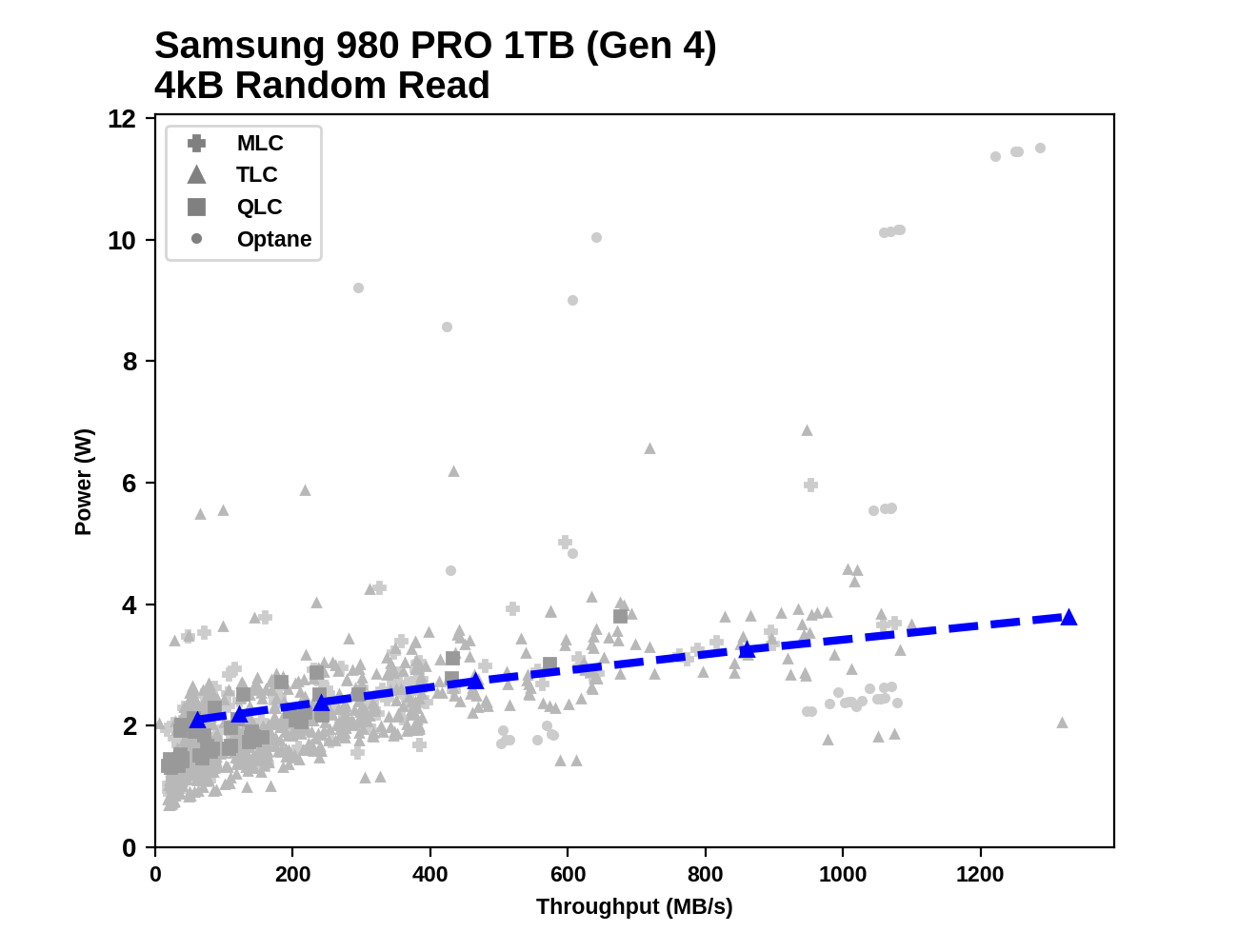 The random read performance and power consumption of the 980 PRO start out in mundane territory for the lower queue depths. At the highest queue depths tested, it is largely CPU-limited and stands out only because we haven't tested many drives on our new, faster Ryzen testbed. The PCIe Gen3 SK hynix Gold P31 is still able to keep pace with the 980 PRO under these conditions, and it still uses far less power than the competition. 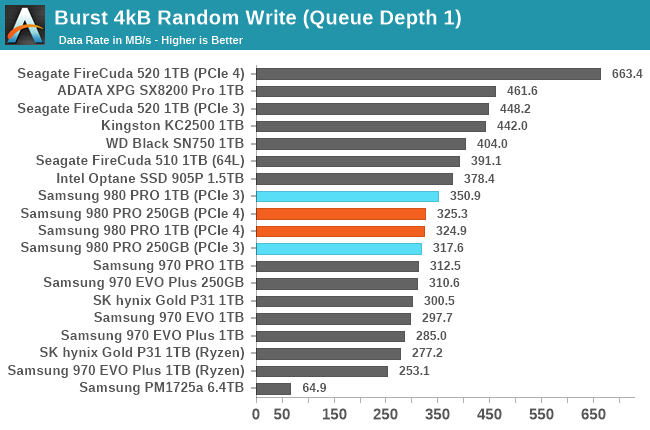 The burst random write performance of the Samsung 980 PRO is an improvement over its predecessors, but Samsung's SLC write cache latency is still significantly slower than many of their competitors. PCIe Gen4 support isn't a factor for the 980 PRO here at QD1, and the two capacities of the 980 PRO seem to disagree whether the other differences between our old and new testbeds help or hurt. Meanwhile, the Phison E16-based Seagate FireCuda 520 does seem to be able to benefit significantly on our Gen4 testbed, where it takes a clear lead. 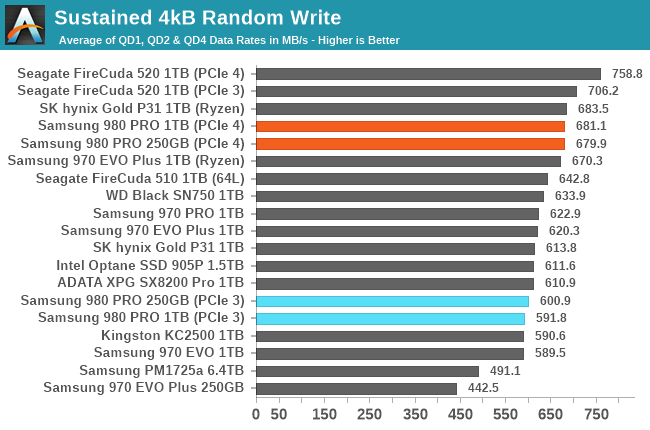 On the longer random write test with some higher queue depths, it's more clear that our new Ryzen testbed performs a bit better than our old Skylake testbed, and that PCIe Gen4 support is only responsible for part of that advantage. Even using PCIe Gen4, the 1TB 980 PRO is not able to establish a clear lead over the PCIe Gen3 drives and is a bit slower than the Phison E16 drive, but the smaller 250GB 980 PRO is a big improvement over the 970 EVO Plus thanks to the larger SLC cache (now up to 49GB, compared to 13GB).

The 980 PRO brings significant and much-needed power efficiency improvements over its predecessors, and takes first place among the high-end 8-channel SSDs. But the 4-channel SK hynix Gold P31 still has a wide lead, since its random write performance is very competitive while its power requirements are much lower.

The 1TB 980 PRO offers basically the same performance profile on this test as its predecessors from the 970 generation: performance tops out around QD4, where CPU overhead becomes the limiting factor. (This test is single-threaded, so higher throughput could be achieved on either testbed using a multi-threaded benchmark, but real-world applications need a lot of CPU power left over to actually *do something* with the data they're shuffling around.)

The 250GB 980 PRO briefly reaches the same peak performance as the 1TB model, but in the second half of the test it still overflows the SLC cache. It's a big improvement over the 250GB 970 EVO Plus, but the low capacity still imposes a significant performance handicap when writing a lot of data. 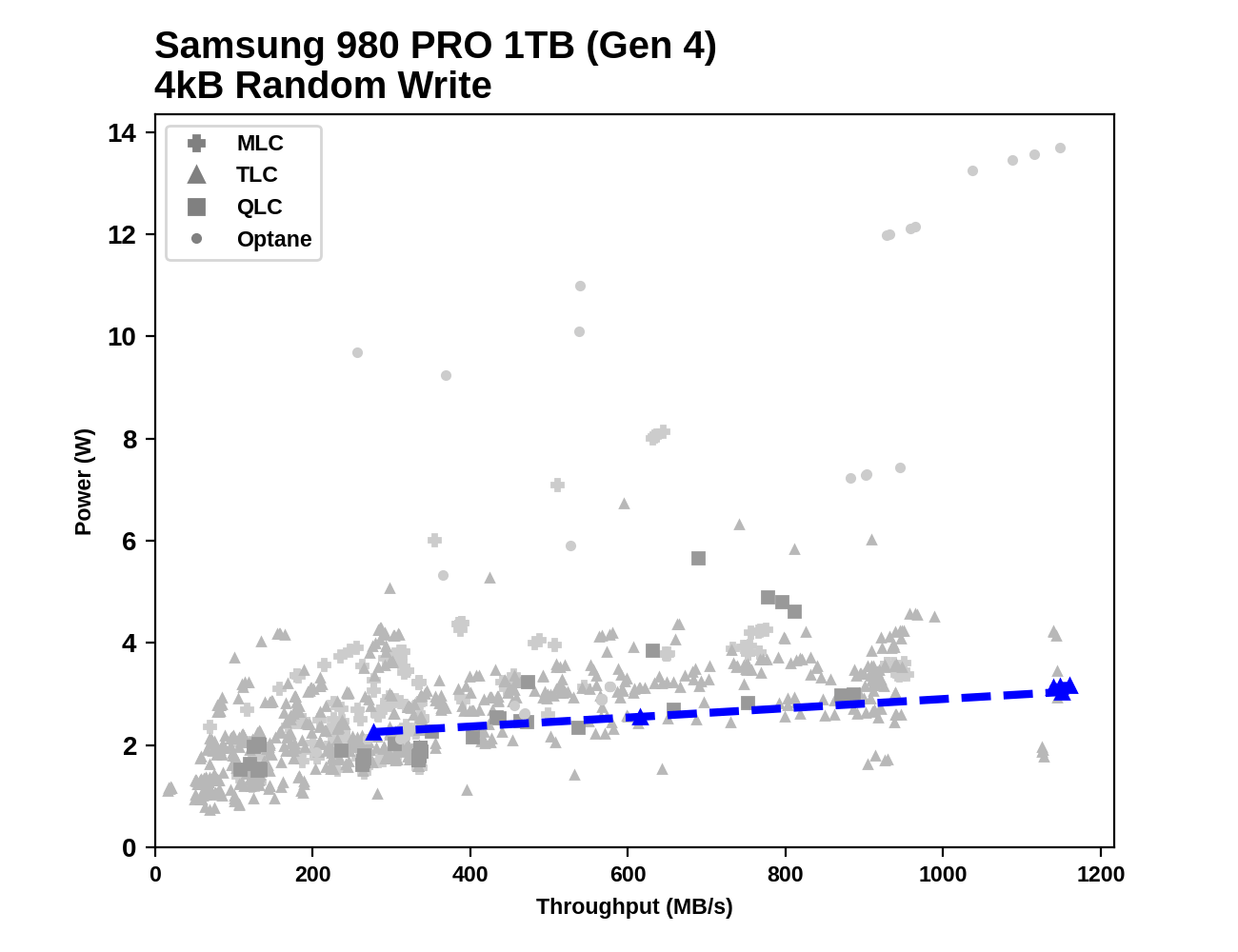 At QD1 the 980 PRO's random write performance is still in SATA territory, but it quickly moves to much higher performance ranges without much increase in power consumption. At the highest queue depths tested, the 1TB 980 PRO's performance is tied with the other CPU-limited drives and its power consumption is about midway between the fairly power-hungry Phison E16 drive and the stunningly efficient SK hynix drive.