With the flood of nForce4 motherboards getting ready to enter the market, we had a decent selection of very recent nForce4 Ultra and nForce4 SLI motherboards. We also had both the SLI and the Ultra versions of the DFI based on the same PCB. With this wide selection of boards, we could look at the differences in the Ultra and SLI chipset and also confirm that they were not unique in any way. 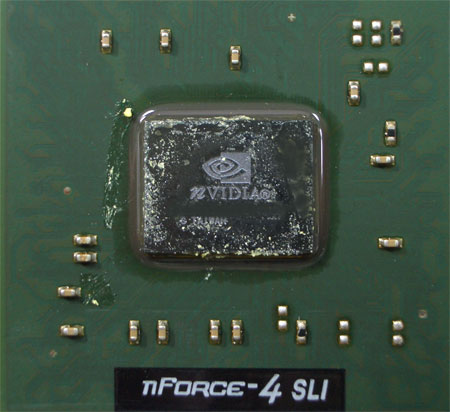 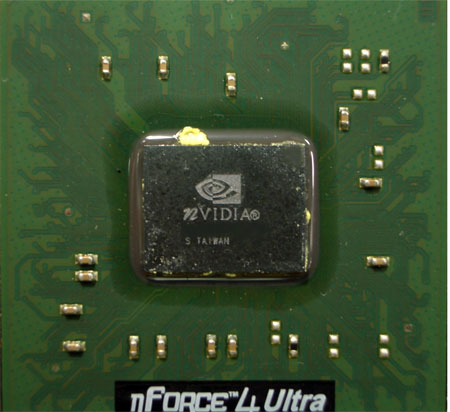 If you look closely at the pictures of the SLI and Ultra, you will see that the chipset themselves appear identical. However, a closer look at the resistors and pads surrounding the chip shows some differences. The resistors appear the same on both, but there are 3 sets of resistor pads that are closed on the SLI chipset while just two sets are closed on Ultra. The vertical set of resistor pads just to the right edge of the chip itself is closed on SLI and open on Ultra. We could find no other obvious differences in the 2 chipsets. Could it be this simple?

We closed the set of resistor pads on the DFI LANParty UT nF4 Ultra-D with conductive paint, as you can see in the photo below. 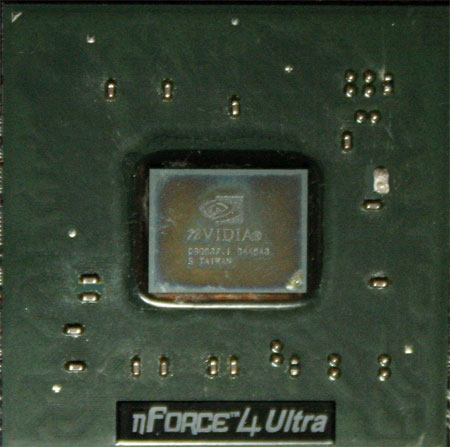 We set the jumpers to SLI, attached the top bridge from an SLI board, since the Ultra boards do not ship with an SLI bridge, and fired up the system. The system was immediately recognized as an SLI chipset on boot and in Windows XP by our latest 71.40 Forceware drivers. Our little bit of very easy modification had "turned" the Ultra chipset into SLI. We no longer had driver limitations and performance was now exactly the same as the performance that we achieved with a normal SLI chipset.

We also tried modifying an Ultra to SLI with an ordinary #2 pencil. It worked perfectly, and with there being so much room around the set of resistor pads, you don't have to be that neat. If you close the pads, you have converted the Ultra to SLI. Those of you who remember Athlon XP modding for CPU speed will recall how close the sets of pads were in that mod. This required masking and careful painting of the pads to be closed. With the Ultra to SLI mod, there is huge real estate around the resistor on which you are working. As a result, even "all thumbs" modders should have an easy time with this one.