For the launch and release of Intel's W480 chipset, Supermicro has prepared a handful of models, each with different configurations to cater to various user needs. Two of Supermicro's W480 models come via the X12SCZ-F and X12SCZ-TLN4F, which share the same core micro-ATX PCB layout, with its green PCB, and black and blue slots. The only difference between both models aside from a few visual differences comes in the controller set. The Supermicro X12SCZ-TLN4F includes dual Intel 10 GbE Ethernet, a single PCIe 3.0 x4 M.2, and four SATA, while the X12SCZ-F opts for dual Gigabit Ethernet. 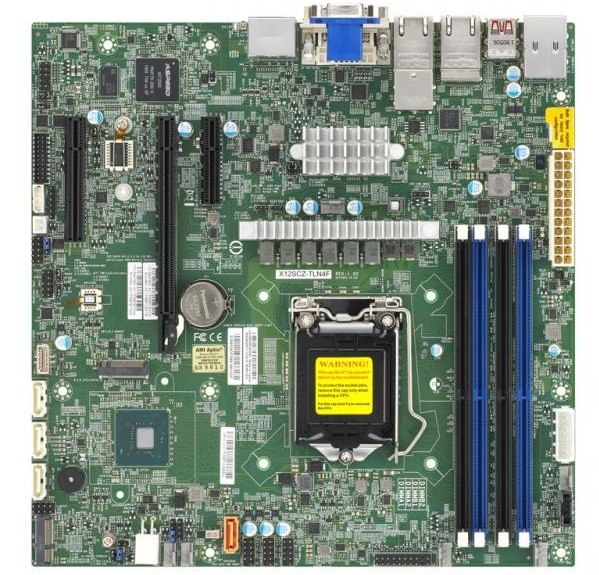 Visually, there's not much difference between the Supermicro X12SCZ-F and X12SCZ-TLN4F aside from the heatsink layout. On the latter, there's a heatsink cooling the Intel X550 10 GbE T-Base dual Ethernet controller, while the X12SCZ-F has a heatsink cooling the W480 chipset. This also includes a transposed socket design for installation into rackmount and 1U chassis. Aside from the networking and the onboard audio, both models are identical in specification and design. This includes one full-length PCIe 3.0 x16 slot, with a half-length PCIe 3.0 x4 slot, and a single PCIe 3.0 x1 slot. For storage, there's one PCIe 3.0 x4 M.2 slot, with four SATA ports with support for RAID 0, 1, 5, and 10 arrays. An additional PCIe 3.0 x1 M.2 Key-E slot is also present on both boards.

Focusing on memory support, both the X12SCZ-TLN4F and X12SCZ-F includes four memory slots, with support for up to DDR4-2933 of ECC and non-ECC memory, with a maximum capacity of up to 128 GB. Both models also include an Aspeed AST2500 BMC controller with a D-sub to access the IPMI physically. Supermicro also features memory error detection with the detection of double-bit errors using ECC memory and the correction of single-bit memory errors across all memory types used. 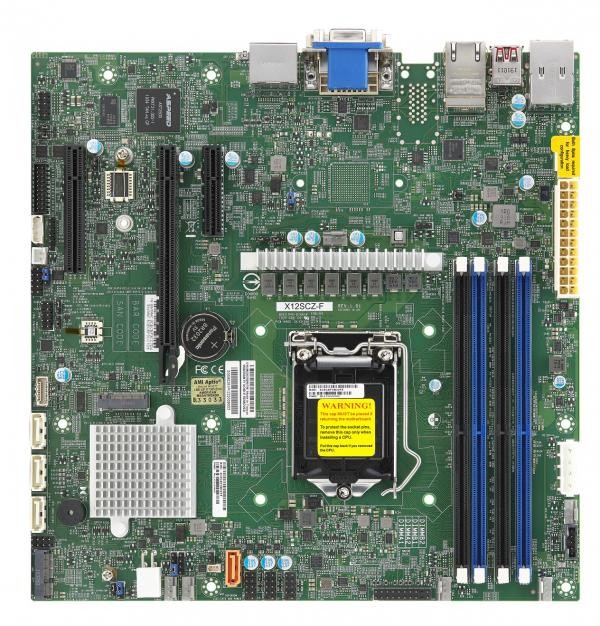 As previously mentioned, the only difference between both models is that the X12CZ-TLN4F opts for an Intel X550 10 GbE T-Base dual Ethernet controller, with two additional Ethernet ports with one controlled by an Intel I219LM controller, and another by an Intel I120-AT. The Supermicro X12SCZ-F includes two Ethernet controllers consisting of an Intel I219LM and I210-AT Gigabit controller pairing. Both models include four USB 3.2 G2 Type-A ports, with two DisplayPort video inputs, a D-sub for the boards IPMI, and a serial port. Both models use a Realtek ALC888S HD audio codec for the onboard audio, but Supermicro doesn't specify how this translates to rear panel audio connections.

The Supermicro X12CZ-TLN4F includes superior networking support with dual Gigabit Ethernet ports and a dual 10 GbE T-Base Ethernet, while the X12CZ-F opts for dual Gigabit Ethernet. Both models include a solid professional feature set including an Aspeed AST2500 BMC controller which allows IPMI access physically via a D-sub video output, or via remote access which includes KVM support. Supermicro at present hasn't unveiled pricing on any of its W480 models, as it expects to sell them to system integrators only.