The smallest of GIGABYTE's W480 models is the W480M Vision W with its micro-ATX frame. It is identical in design to the more jumbo W480 Vision W with its black heatsinks and heavily visible traces on the PCB. The most notable features of the W480M Vision W includes dual PCIe 3.0 x4 M.2 slots, eight SATA ports, dual Ethernet ports with one Intel 2.5 GbE Ethernet controller, and a Realtek ALC1200 HD audio codec. 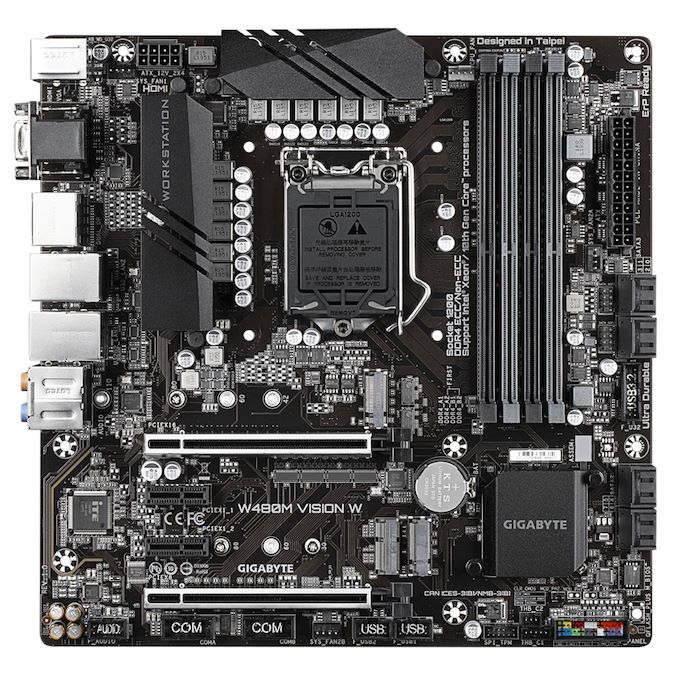 Despite the smaller micro-ATX size, the GIGABYTE W480M Vision W crams in a solid feature set. Included are two full-length PCIe 3.0 slots which operate at x16, and x8/x8, with two PCIe 3.0 x1 slots. For storage, there is a pair of PCIe 3.0 x4 M.2 slots, with eight SATA ports that include support for RAID 0, 1, 5, and 10 arrays. Memory support includes both ECC and non-ECC memory, with speeds of up to DDR4-2933 listed and a maximum capacity of up to 128 GB across four available memory slots.

On the rear panel is a good selection of input and output for a micro-ATX model, with two USB 3.2 G2 Type-A, and four USB 3.2 G1 Type-A ports. For users looking to use Intel's UHD integrated graphics, there's two DisplayPort 1.4, one D-Sub, and one HDMI 1.4 video output. At the same time, a PS/2 keyboard and mouse combo port allows the use of legacy peripherals. Looking at networking, there are two Ethernet ports with one port powered by an Intel 2.5 GbE Ethernet controller, while the other port is a standard Intel Gigabit port. However, GIGABYTE hasn't specified which controllers are being used. Finishing off the rear panel is five 3.5 mm audio jacks and an S/PDIF optical output which is controlled by a Realtek ALC1200 HD audio codec.

The GIGABYTE W480M Vision W is a solid alternative for users looking to use Intel's Xeon and Xeon W-1200 series processors, but need something with a smaller desktop footprint such as micro-ATX. There's plenty of features on offer including dual PCIe 3.0 x4 M.2 slots, an Intel 2.5 GbE Ethernet controller, and eight SATA slots with full chipset support on RAID 0, 1, 5, and 10 arrays. GIGABYTE hasn't unveiled pricing at this moment, but it will likely be the cheapest of the three models showcased in this overview.