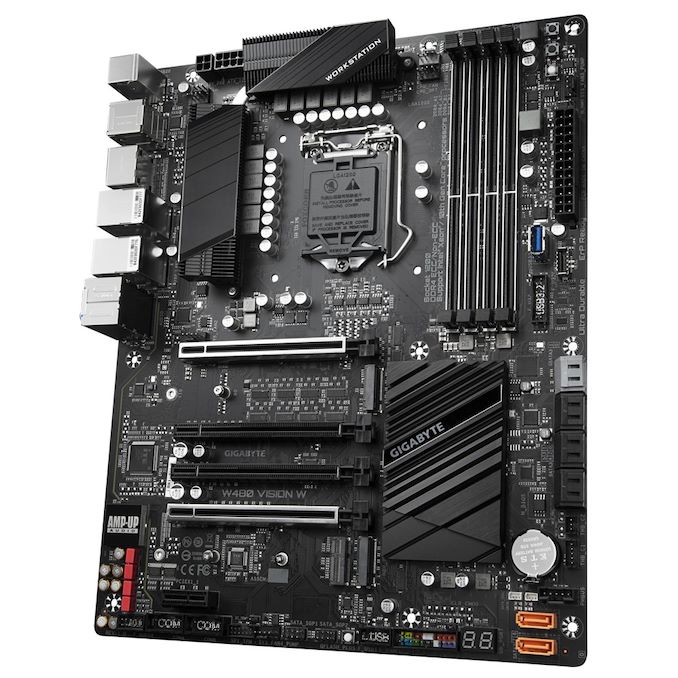 Although the GIGABYTE W480 Vision W isn't as visually appealing as the more premium Vision D, the W still looks good with a very busy PCB full of components and circuitry around the PCIe slot area. Included are four full-length PCIe 3.0 slots, with two of them featuring a metal slot reinforcement coating. The two metal-coated slots operate at PCIe 3.0 x16 and PCIe 3.0 x8, while the remaining two are locked down to PCIe 3.0 x4, although the second of these x4 slots share bandwidth with second PCIe 3.0 x4 M.2 slot. There is a total of eight SATA ports, with six from the chipset that includes support for RAID 0, 1, 5, and 10 arrays, while an ASMedia SATA controller drives the other two ports in orange.

On the rear panel, the W480 Vision W includes a single USB 3.2 G2 Type-A, three USB 3.2 G1 Type-A, and four USB 2.0 ports. Included is a pair of RJ45 ports, one controlled by an Intel 2.5 GbE Ethernet controller, and the other by an Intel Gigabit controller, although GIGABYTE hasn't specified the actual controllers used. Powering the five 3.5 mm audio jacks and S/PDIF optical output is a Realtek ALC1220-VB HD audio codec, while a pair of video outputs including a DisplayPort 1.4 and HDMI 1.4 allow users to use integrated graphics on supported processors. Finishing off the rear panel is a PS/2 keyboard and mouse combo port.

The GIGABYTE W480 Vision W is a solid offering with support for both ECC and non-ECC memory, a 2.5 GbE Ethernet controller, and a premium ALC1220-VB audio codec. At present GIGABYTE hasn't unveiled pricing for any of its W480 models, but we expect the W480 Vision W to come in cheaper than the higher-grade W480 Vision D.