Fondly remembered for the LANParty series of motherboards back in the 2000s, DFI disappeared off the radar from the consumer motherboard market. However, it still creates a range of industrial models and embedded solutions. The DFI CMS310-W480 is a little bit of an enigma with no official images or anything which could decipher the board's visual design and layout. We do know the CMS310-W480 will include a single PCIe 3.0 x4 M.2 slot, four SATA ports, and three video outputs on the rear for triple display capability. 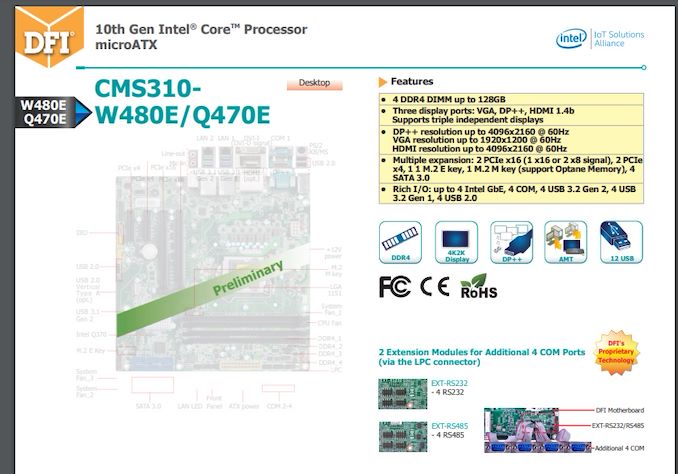 The official specifications list says the rear panel includes two Gigabit Ethernet ports but can accommodate up to four Gigabit ports upon request, which gives the impression that DFI will be looking to secure specific orders in volume, perhaps from system integrators and from within the server/workstation industry. It lists two USB 3.2 G2 ports and four USB 3.2 G1 ports but doesn't specify between Type-C and Type-C, with a trio of video outputs including a DisplayPort, HDMI, and a D-sub. The three 3.5 mm audio jacks will be powered by a Realtek ALC888 HD audio codec.