The last in an interesting B550 product stack from MSI is the brands professional-focused budget model, the B550-A Pro. In recent years, the A-Pro model has been one of MSI’s most basic designs and cheapest with the B450-A Pro costing just $90 at launch. The MSI B550-A Pro builds upon a basic all-black design with some notable inclusions including two M.2 slots, six SATA ports, a Realtek Gigabit Ethernet controller and a Realtek ALC892 HD audio codec. 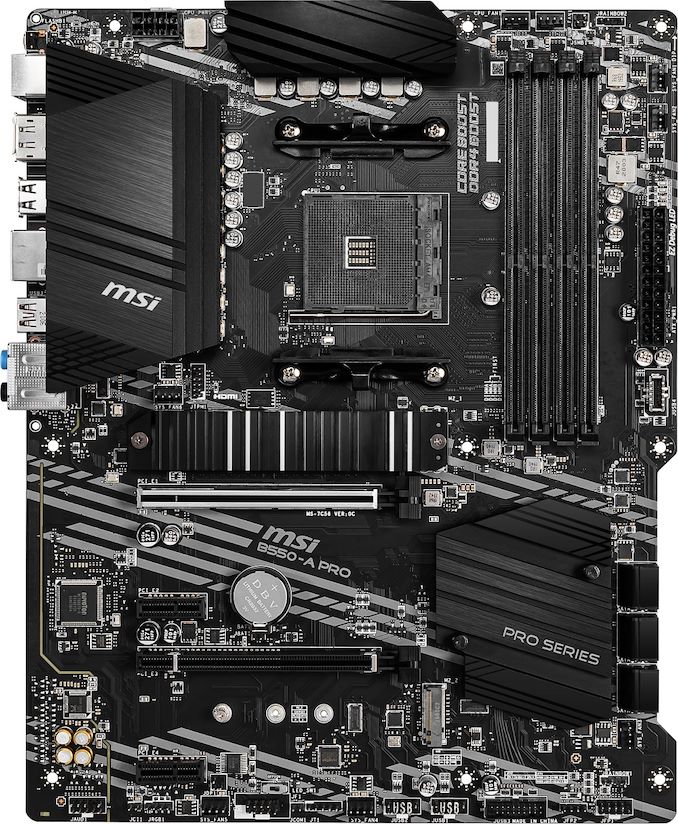 The MSI B550-A Pro is an all-black ATX sized model which sits as the brands entry-level B550 model. Included in the feature set are two full-length PCIe slots which operate at PCIe 4.0 x16, and PCIe 3.0 x4, with two additional PCIe 3.0 x1 slots. The A-Pro has support for up to DDR4-4400 memory, with a total of four memory slots which allow users to install up to 128 GB. Looking at storage capability, there is a pair of M.2 slots with the top slot operating at PCIe 4.0 x4, and the second slot at PCIe 3.0 x4, with six SATA ports for conventional the installation of conventional SATA devices.

Focusing on the rear panel of the B550-A Pro, MSI includes two USB 3.2 G2 ports including a Type-A and Type-C, with two USB 3.2 G1 Type-A and four USB 2.0 ports. For users looking to pair this model up with a Ryzen APU, there is a pair of video outputs including a DisplayPort 1.4 and HDMI output, with a small BIOS Flashback button. A budget-focused Realtek controller pairing including a Realtek RTL811H Gigabit Ethernet controller and Realtek ALC892 are preset, with the latter which spawns five 3.5 mm audio jacks and a S/PDIF optical output on the rear panel.

Out of MSI’s B550 product stack and where pricing seems to be going currently on budget motherboards, the B550-A Pro has an MSRP of $140. If compared directly against the B450-A Pro this replaces, there is a stark difference in price point and feature set, with the only real upgrades in specifications coming through PCIe 4.0 support via the CPU, an extra M.2 slot and through better memory capability. This model above most others paints the discrepancy between what an entry-level board cost 2-years ago compared to what actually one costs currently.