The Battering Ram of Time

A wouldn’t say a lot, but at least some discussion has been permeating through the airwaves since the Ryzen 3000 desktop launch as to what AMD was going to do in its sub-$200 space. Not having a latest generation product in a very active part of the market was missing from the portfolio, but initially AMD was happy for its previous generation CPUs and APUs to fill that role.

There were two schools of thought. The first is that AMD would launch lower core count CPUs, despite having a supposedly high yielding chiplet design that was going straight into its highest margin server product portfolio. Building a low core count chiplet design also incurs the added cost of bringing a chiplet and an IO die together in packaging, further decreasing margins. It seemed unlikely at the time. 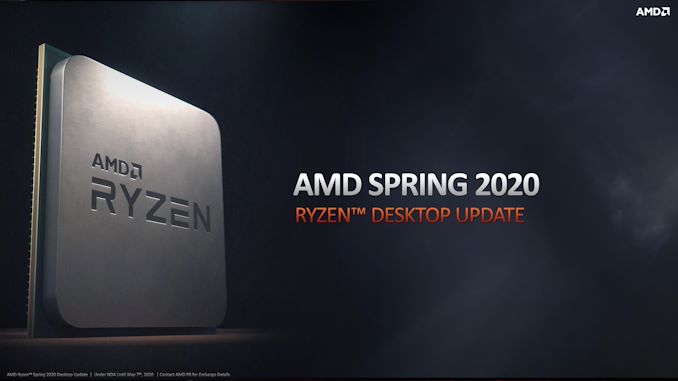 The second school of thought would be that AMD would populate this part of the market with desktop versions of the Ryzen 4000 mobile APUs. These monolithic parts had integrated graphics, and would very likely easily scale from 45 W to 65 W for the desktop. Like previous APUs there would only be 8 PCIe lanes for external graphics, but for this generation also only PCIe 3.0 due to how the mobile APUs were powered.

Personally I assumed the second one, and that AMD would ignore the CPUs and go straight in for the APUs. I was perhaps unprepared for the apparent success of AMD’s mobile chips in the laptop space. We’ve reviewed the ASUS Zephyrus G14, a true flagship AMD notebook, and the Acer Swift 3, offering mind-bending performance and quality for the price. AMD is promoting 100+ design wins on Ryzen Mobile in 2020, global pandemic permitting, and the OEMs are jumping on the bandwagon it seems. 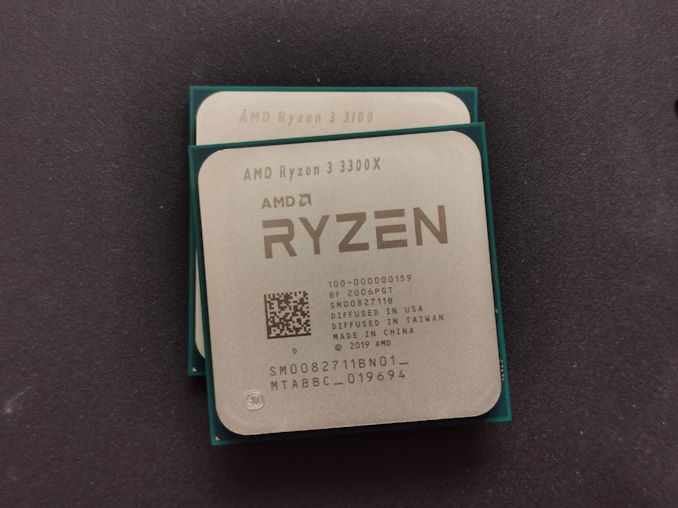 As we’ve shown in the review, this means that we get some CPUs. The Ryzen 3 3300X and Ryzen 3 3100 are odd elements to the Ryzen family, especially the 3100 with its awkward CCX and core configuration, but both parts offer a lot of performance for their pricing. At $120 and $99 respectively, using AMD’s latest Zen 2 microarchitecture and the power efficient 7nm TSMC process, AMD is defining a new baseline in budget performance.

This is personified in very much in comparing the AMD Ryzen 3 3300X to Intel’s flagship consumer processor from 2017.

Three years and four months ago at CES, Intel launched to great fanfare its Kaby Lake processor family, with the Core i7-7700K sitting atop of the stack. This quad core Skylake-based chip offered frequency bumps from the previous gen, and better gaming performance in a 91 W package. Its 4.2 GHz base frequency, 4.5 GHz turbo frequency, DDR4-2400 memory support and 16 PCIe 3.0 lanes were the talk of the down. All this could be yours for $350.

I’m pretty sure prices of used Kaby Lake CPUs are about to crash. They’re going to have to fall a long, long way though.

It's at this time I should point out that Intel obviously has newer quad cores on offer. The 9th Generation Core i3 parts are quad core with no hyperthreading, but still running a variant of the Skylake microarchitecture, albeit at a higher frequency. The Core i3-9100 for example is a 4C/4T part with a base of 3.6 GHz and turbo of 4.2 GHz, and a TDP of 65W, for $120. It still only has PCIe 3.0 and DDR4-2400 however, so it would likely perform worse than the i7-7700K. Even with this, Intel's ability to provide enough stock of these low-end parts, depending on your location, is questionable as previously mentioned. Case in point: the comapny never even made it as far as sampling any of the 9th Generation i3 parts for review.

All that being said, AMD still has two issues to sort out with the new Ryzen 3 parts. The idle power seems high at 18 W, and B550 motherboards need to exist to make these Ryzen 3 processors more attractive for system builds. The latter should come around soon, and we’ll have additional coverage there.

At the end of the day, if you are the sort of person that enjoys waiting a couple of years to get games 95% off on Steam, the 3300X is your processor. Those AAA titles are calling.