OCZ is a well-known supplier of Enthusiast DDR memory. However, OCZ has not until now delivered the kind of "killer" product in DDR2 that is their trademark in DDR memory. OCZ tells us that this product, their PC2-4200EB, is the product that stands above the crowd. 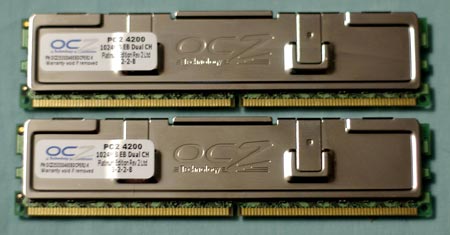 Test DIMMs were a matched pair of double-sided 1024MB DDR2 DIMMs with platinum-colored heatspreaders. We would be surprised, but not astounded, by 512MB DDR2 DIMMs rated at 3-2-2-8, when the rest of the competition is at 3-3-3 or slower timings. However, these are 1GB DIMMs rated at 3-2-2-8, which is an incredible achievement. All performance tests were run with 2X1GB DIMMs.

OCZ also markets these same PC2-4200EB modules in a 1GB kit with 2x512MB single-sided DIMMs. Other testers have claimed that the single-sided 512MB DIMMs are even faster than the DS 1GB versions, but we did not find that in our tests. While we did test both SS and DS DIMMs, we did not find the single-sided to perform much differently than the double-sided modules. This makes the 1GB OCZ DDR2 DIMMs the first 1GB memory that we have tested - DDR or DDR2 - where the 1GB performance is as good as, or better than, any available 512MB module.

OCZ did not share the maker of the memory chips on the PC2-4200EB. They said that they were made for them by a major chip-maker, but the information was proprietary. The memory chips are BGA, so we weren't comfortable trying to remove the heatspreaders to check. We recently destroyed some BGA memory when we removed a heatspreader and these DDR2 chips were just too good to risk destroying them in order to report the memory chip maker. They behave like Micron chips in some benchmarking, but we cannot be certain of their origin. We will report more when we find out the memory chip maker.

The full suite of benchmark tests were run at all six benchmark speeds. This includes Quake3, Super PI, Sandra 2004 SP2 Memory Tests, and Return to Castle Wolfenstein-Enemy Territory. We also ran UT2003, Aquamark 3, and Comanche 4 at every memory speed to verify stability of the reported memory timings. All benchmarks and additional tests had to complete without incident for the memory settings to be considered stable.