General Code Compile - Who's it For?

As I had mentioned, one big advantage of having an Arm system like this is the fact that it enables your native software development, without having to worry about cross-compiling code and all of the kerfuffle that that entrails.

For me personally, one issue had been the fact that we need to compile our SPEC test suite for Arm architectures, which isn’t all that evident when you don’t have a native machine to test things on.

Still, I had been able to configure a proper cross-compile setup- in this case GCC9 on an x86 machine (AMD Ryzen 3700X) cross-compiling for an AArch64 target, versus natively compiling the same target with the same compiler on the eMAG workstation. 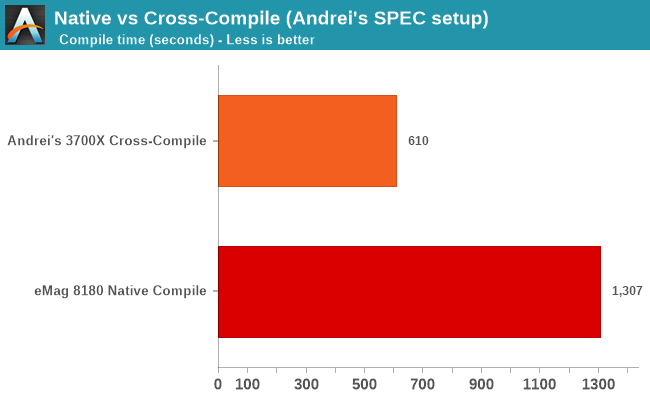 The first thing I noted when compiling things on the eMAG system, is that it took quite an enormous amount of time for linking together the libraries and executables. Unfortunately, this isn’t something that can be parallelised, and it ends up being a mostly single-thread performance bottlenecked part of software development.

Although the eMAG system does have more processing power than your average consumer system, it’s unlikely for this to actually materialise in the average development environment due to the massive singe-threaded performance disadvantage of the system.

In my case, my personal desktop machine outperformed the eMAG system in this one use-case by a factor of >2x.

My personal view on this is that if I were to be trying to port a piece of software to Arm, assuming that the act of cross-compiling itself isn’t an inherent issue, then I would probably prefer to simply cross-compile things on my regular x86 machine and deploy and test it on a lower-end embedded Arm board.

The only real audience who could rationalise the system performance deficit for its architectural flexibility would be developers who actually work on hardware enablement – using the SBSA system to its fullest for things like Arm driver development and making full use of the peripherals and PCIe capabilities of the system.