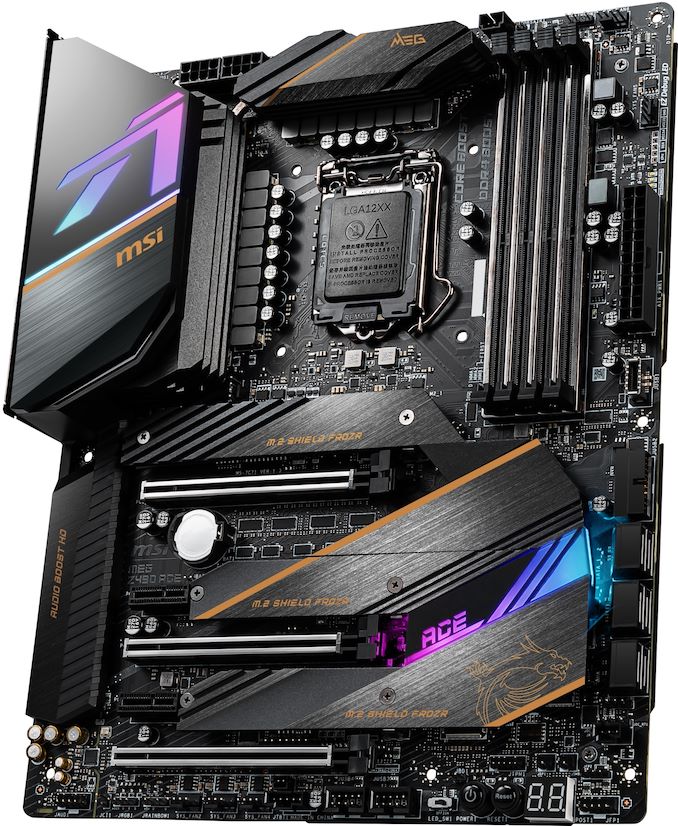 Its design is reminiscent of previous iterations of the Ace series, with a primarily black finish, including black heatsinks on a black PCB with gold accents. On the rear panel cover is an elegant RGB enabled A-shaped logo, most likely to signify the A from the Ace branding. The chipset heatsink and M.2 heatsinks follow the same design, with a yellowish accented line going through it, with some RGB LEDs on the heatsink itself. On the rear of the board is a large metal backplate which is designed to stop the PCB from bending during installation.

Looking at its expansion support, there's three full-length PCIe 3.0 slots which operate at x16, x8 and x4, with three PCIe 3.0 x4 M.2 slots, two PCI 3.0 x1 slots, and six SATA ports which support RAID 0, 1, 5 and 10 arrays. On the memory front, there's a total of four slots with support for up to DDR4-4800, with a maximum capacity of up to 128 GB. Along the bottom of the board is an overclocker's toolkit consisting of a 2-digit LED debugger, a power button, and a reset button. On the back is a large metal backplate to prevent PCB bending.

On the rear panel is a single USB 3.2 G2 20 Gbps Type-C, three USB 3.2 G2 Type-A, two USB 3.2 G1 Type-A, and two USB 2.0 ports. Also featured is a pair of Ethernet ports, one powered by a Realtek RTL8125B 2.5 G controller, and the other by an Intel I219V Gigabit. There are two antenna inputs for the Intel AX201 Wi-Fi 6 wireless interface which has support for BT 5.1, and the three 3.5 mm and S/PDIF Optical output is powered by a Realtek ALC1220 HD audio codec. Finishing off the rear panel is a clear CMOS button, and a BIOS Flashback button.

Even though the MSI MEG Z490 Ace is a step down from the Godlike in terms of features, it's still a solid representation of a premium desktop model. The Ace continues the trend of offering sleek aesthetic design, with a competitive feature set, with an equally competitive price expected with a lot of its features focused on gaming and enthusiasts.