Adding a new element of variety to a small handful of Z490 models at launch, the Biostar Z490GTA has a striking design which emanates from the center of the board and has a sun-ray effect black grey printed patterned PCB. Another model focused on the entry-level ATX Z490 motherboard market, the Z490GTA includes two PCIe 3.0 x4 M.2 slots, six SATA ports and features a Wi-Fi 6 wireless interface. 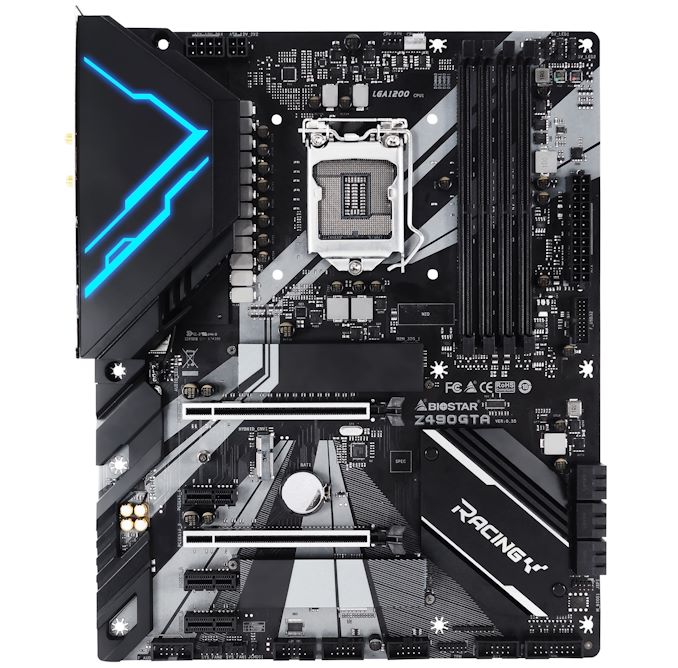 The Biostar Z490GTA opts for a uniquely implemented visual design across its heatsinks and PCB from its premier Z490GTA Evo model. The black, grey and white color scheme is present on the heatsinks and PCB, with some integrated RGB LEDs within the rear panel cover. The board features two full-length PCIe 3.0 slots which operate at x16/+4, with three PCIe 3.0 x1 slots For storage is a pair of PCIe 3.0 x4 M.2 slots, each with an included heatsink, with six SATA ports with support for RAID 0, 1, 5, and 10 arrays. There are four memory slots which have support for up to 128 GB of DDR4-4400 memory. Biostar is advertising a 14-phase power delivery with an 8-pin + 4-pin pair of 12 V ATX power inputs designed to deliver power to the CPU.

On the rear panel is four USB 3.2 G1 Type-A, and two USB 2.0 ports, which means no USB 3.2 G2 or Type-C connectivity is featured. A trio of video outputs consisting of a single HDMI, DisplayPort 1.4, and D-Sub are present to allow users to leverage the integrated Intel graphics. For the onboard audio, Biostar is using a Realtek ALC1150 HD audio codec with just three 3.5 mm audio jacks, while an Intel Wi-Fi 6 wireless interface provides both wireless networking and BT 5.1 device support. A single Intel I219-V Gigabit Ethernet port and separate PS/2 keyboard and mice inputs finish off the interesting Z490GTA rear panel.

Positioned below the Z490GTA Evo in its product stack, the Biostar Z490GTA has the core features expected from an entry-level calibre Z490 model. It is basic in design, and includes basic Gigabit Ethernet, although Wi-Fi 6 support is a nice thing to have. The Biostar Z490GTA has an MSRP of $""""" and puts it as one of the cheapest Z490 models available for the launch of Intel's 10th generation Comet Lake processors.