As we move on to the camera evaluation of the S20 series, I think it would be good to recap the new sensor architectures that Samsung is deploying in its new flagships. To say that this is the biggest camera hardware upgrade that Samsung has ever embarked on is a bit of an understatement, as the new modules on the S20 series, and in particular the S20 Ultra, have seen some fundamental shifts in terms of their designs and specifications.

Starting off with the elephant in the room, that’s the new S20 Ultra. Last year we first saw talk of Samsung LSI introducing a new 108MP camera sensor that had been developed in collaboration with Xiaomi. Although closely related to that design, the HM1 sensor is a bit different to the HMX sensor that’s employed in the Xiaomi phones. What’s special about these new sensors is their sheer size: at 1/1.33”, it’s over double the sensor area of previous generation units found in past Galaxy phones. A lot of people will criticize the 108MP count as being a gimmick, but in light of the huge new sensor the actual pixel pitches aren’t exactly all that smaller than what we’ve seen from previous generation high-megapixel sensors from the last year or two, still falling in at 0.8µm. 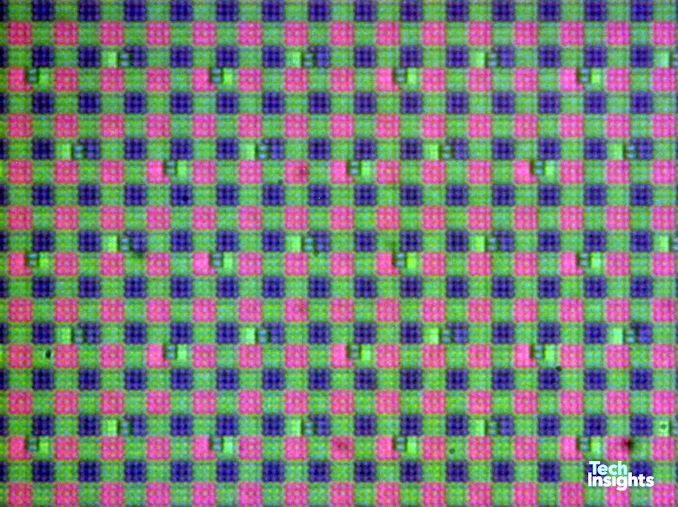 What’s rather peculiar about the HM1 sensor in the S20 Ultra though is that this isn’t just another quad-Bayer sensor like those seen in other designs over the year, but rather a “Nonacell” design, with the color filter array covering up 9 subpixels. Just like quad-Bayer designs, the new nona-Bayer  sensor is able to demosaic chroma information to be able to actually achieve the advertised 108MP resolutions. Physically, chroma resolution still is only 12MP on the sensor, and that’s something that you’ll want to keep in mind when we’ll later on investigate the 108MP samples of the phone. 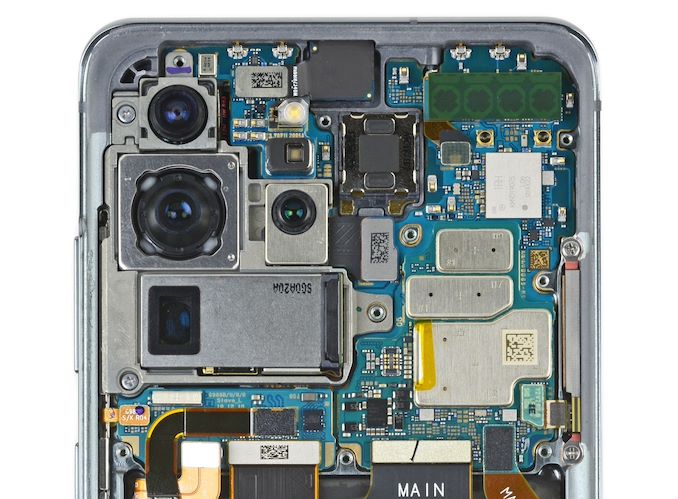 As seen in the above teardown shot, the 108MP unit dwarfs the other sensors in the phone, but this does come with some complications. On the optics side, Samsung has now opted for a fixed f/1.8 aperture and has dropped the dual-aperture f/1.5-2.4 system we’ve seen on the S9 and S10 series. Because the new sensor is so huge, it actually becomes an issue to design proper optics that actually fit into the z-height of the phone. Even though the S20 Ultra has a thick camera bump now, it still has to make do with a smaller aperture optical lens than previous generations. The new bigger sensor also has another side-effect, that being a shallower depth of field when focusing on objects. I do find it a very big pity that Samsung opted to drop the dual-aperture system as that would have been the perfect fit for such a big sensor design and essentially eliminate any potential drawbacks on the optics side. Unfortunately, as it’s gone, I do expect the optics to not perform quite as optimally as we’ve seen on the S10 series.

Below the 108MP sensor, we find another unique design that’s exclusive to Samsung at this moment, and that’s the new periscope design telephoto module. Such modules were pioneered by Huawei as we first saw the P30 Pro last year bring it to the mass market, however Samsung goes way beyond what any other vendors is currently brining to the market. The optical magnification of Samsung’s design isn’t too special, only reaching a factor of 4x and a resulting 24° field of view or 103mm equivalent focal length. What is special though is that Samsung has crammed in a full 48MP IMX586 into the module, going far beyond the smaller 12 or 8MP sensors that are being deployed by other vendors such as Huawei. It’s the usage of such a big sensor that lies perpendicular to the body of the phone that actually forces the S20 Ultra to have such a huge camera bump on the back – as it’s being limited by the thickness and the footprint of the telephoto camera module. 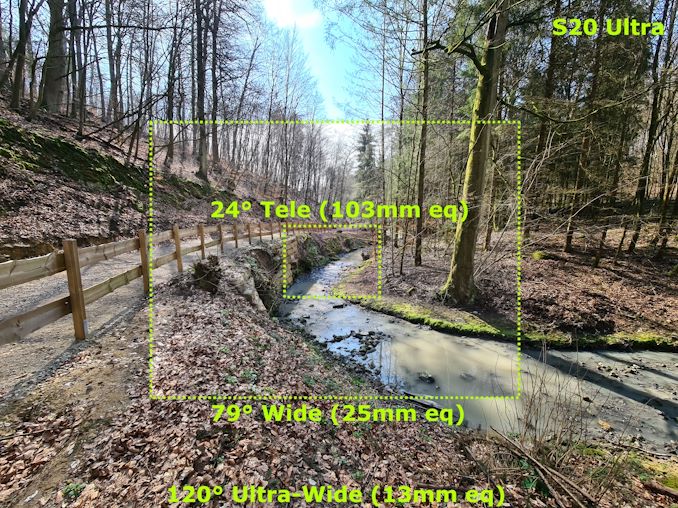 To square off the trio of cameras on the S20 Ultra, we see a new ultra-wide-angle module. Samsung here opted to go for a lower megapixel count sensor at 12MP compared to 16MP on the S10 series, but the pixel pitch increases from 1.0µm to 1.4µm, which should allow it go achieve better per-pixel sharpness and low-light capturing abilities. It remains quite wide at a 120° viewing angle, just a tad tighter than 123° unit on the S10 series.

When looking at the different viewing angles of the S20 Ultra, we see some big discrete steps between what the different sensors are able to natively capture at their fullest. The main sensor on the S20 Ultra is actually a tad wider than what Samsung is marketing, and it produces 25mm equivalent focal length images, a little wider than the 26mm of the S10 series and the other S20 phones. Of course, the telephoto lens will have a small field of view of only 24°, but that’s precisely what allows it to achieve such high magnification levels, also thanks to the high resolution captured within this frame.

While the S20 Ultra’s camera design is fascinating, the design that actually excited me a lot more when the phones were first introduced is the camera trio that’s found on the regular S20 and S20+. Here Samsung is using a completely different approach that’s pretty much unique in the industry.

Starting off with the main sensor, this is seemingly a pretty straightforward design that really only differentiates itself through the fact that’s it’s now a bigger sensor falling in at 1/1.76”. The resolution still is 12MP and it’s a regular Bayer sensor, so pixel pitches now grow to 1.8µm. The optics remain similar to the S20 Ultra’s, coming with a fixed f/1.8 aperture lacking the dual-aperture system and of course also includes OIS. The Ultra-Wide-Angle is also the same as on the S20 Ultra. 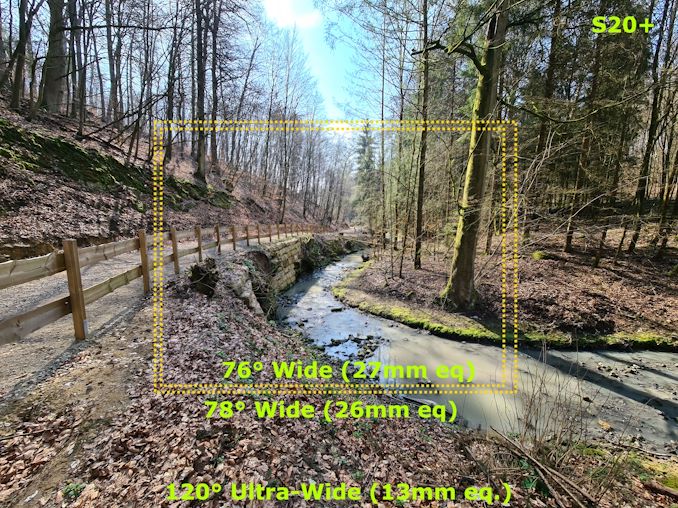 What’s really exciting about the S20 and S20+ is the “telephoto” module. The weird part is that this isn’t a telephoto module at all, but it’s an actual secondary wide-angle lens that’s only slightly tighter than the main camera. The sensor here is also large at 1/1.76”, but it comes a 64MP resolution with 0.8µm pixels. I actually haven’t heard confirmation of the color filter array of the unit, whether it’s quad-Bayer with remosaic or whether it’s a true 64MP Bayer sensor.

Why Samsung is able to call this a 3x telephoto module is that when cropping a 1:1 12MP picture out of it, it does end up at a 3x magnification in relation to the main camera sensor. The question you’re of course posing, is why would Samsung go for such a camera configuration? The first answer, possibly the most obvious one, is 8K video recording. As the main camera unit’s 12MP native resolution isn’t sufficient for 8K video recording, Samsung needed to find a way to include this into the regular S20 series as well – and obviously if you had an actual telephoto module for this then you’d end up with a pretty useless setup. Going for a secondary wide-angle module kills two birds with one stone, as you have one module being able to serve as the 8K video recording unit as well as taking advantage of the high-megapixel count of the unit to be able to achieve respectable crop-zooming.

I was most excited about this setup, more-so than that of the S20 Ultra, because it opens up a lot of possibilities in terms of sensor fusion and computational photography that’s physically just not possible on the S20U. Without spoiling the camera evaluations too much, this also means that the S20 and S20+ have quite high quality zoom capabilities in the 1-3x range as well, and it doesn’t behave as a “normal“ telephoto module at these intermediate levels.