Given our recent focus on Half Life 2 performance, it should be no surprise that we start off our performance coverage with Valve’s latest title.  The benchmarks we used for this review were created in house and are all documented (as well as available for download) in Parts 1 and 2 of our Half Life 2 GPU Roundups.  One word of caution however, the benchmarks in those reviews used NVIDIA’s 67.02 drivers, however those drivers in particular do not yet have SLI support, thus we were forced to use older 66.93 drivers for this review – thus making our NVIDIA Half Life 2 numbers not directly comparable between these reviews.

In this first demo we notice a couple of things; for starters, there is a small but consistent performance drop when enabling SLI.  The reason behind this performance drop is because at lower resolutions we are still CPU limited with the higher end 6800 based GPUs, thus the additional overhead of splitting up the rendering and forwarding data from one GPU to the next for recombination ends up making SLI slightly slower than just a single GPU.  That being said, no one would realistically have $800+ worth of video cards and run at 1024 x 768. 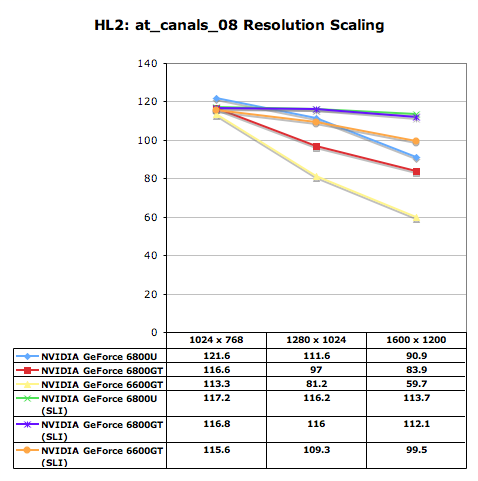 Looking at 1280 x 1024 there begins to be more of a performance benefit to SLI, but the benefits are not really significant until we hit 1600 x 1200.  At 1600 x 1200 the 6800GT and Ultra are still somewhat CPU limited, but the 6600GT is far from it.  Moving to two 6600GTs increases performance by 67% and delivers higher performance than a single 6800 Ultra, 9.5% faster to be exact.  This scenario alone showcases the upgrade potential for SLI; purchasing a single 6600GT today allows you to run Half Life 2 at 1024 x 768 quite well, but adding a second card later on will let you run at higher resolutions (or more GPU intensive games).  Assuming you can add that second card later on for less than you purchased the first one, your upgrade path actually puts you in a better situation overall than had you just purchased a single, more expensive card at the start.  Keep an eye on this comparison between two 6600GTs and a single 6800GT/Ultra to evaluate the mainstream upgrade path benefits of SLI.

With 4X AA and 8X AF enabled, the situation changes dramatically.  Although the performance gains are impressive, the pair of 6600GTs isn’t able to outperform a single 6800GT/Ultra.  For 6800GT/Ultra owners, SLI enables smooth playability at high resolutions with AA and AF enabled.  We play tested much of Half Life 2 with two 6800GTs at high resolutions with AA/AF enabled and for the most part the game was butter smooth; at 1600 x 1200 with 4X AA/8X AF enabled however there were some areas where even two 6800 Ultras would get choppy.  But most resolutions and settings that were not smooth before on a single card were definitely playable thanks to SLI. 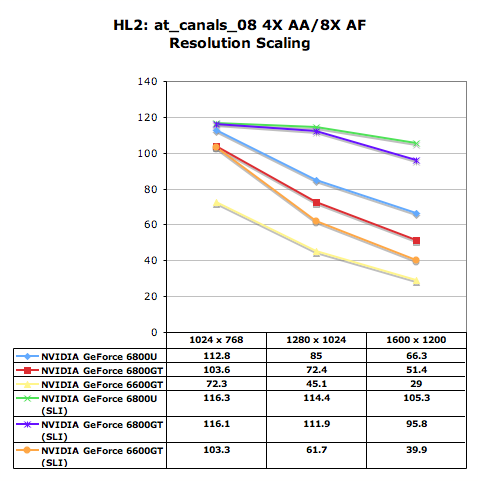