Unlike Doom 3, Half Life 2 has no build in benchmark demo but it has full benchmark functionality.  To run a Half Life 2 timedemo you must first modify your Half Life 2 shortcut to include the -console switch then launch the game.

Once Half Life 2 loads, simply type timedemo followed by the name of the demo file you would like to run.  All Half Life 2 demos must reside in the C:\Program Files\Valve\Steam\SteamApps\username\half-life 2\hl2\ directory.

Immediately upon its launch, we spent several hours playing through the various levels of Half Life 2, studying them for performance limitations as well as how representative they were of the rest of Half Life 2.  After our first pass we narrowed the game down to 11 levels that we felt would be good, representative benchmarks of gameplay throughout the entire game of Half Life 2.  We further trimmed the list to just five levels: d1_canals_08, d2_coast_05, d2_coast_12, d2_prison_05 and d3_c17_12.  We have put together a suite of five demos based on these levels that we believe are together representative of Half Life 2 gameplay.  You can download a zip of our demos here. As we mentioned earlier, ATI is distributing some of their own demos but we elected not to use them in order to remain as fair as possible.

When benchmarking Half Life 2 we discovered a few interesting things:

Half Life 2's performance is generally shader (GPU) limited when outdoors and CPU limited when indoors; now this rule of thumb will change if you run at unreasonably high resolutions (resolutions too high for your GPU) or if you have a particularly slow CPU/GPU, but for the most part take any of the present day GPUs we are comparing here today and you'll find the above statement to be true.

Using the flashlight can result in a decent performance hit if you are already running close to the maximum load of your GPU.  The reason behind this is that the flashlight adds another set of per pixel lighting calculations to anything you point the light at, thus increasing the length of any shaders running at that time. 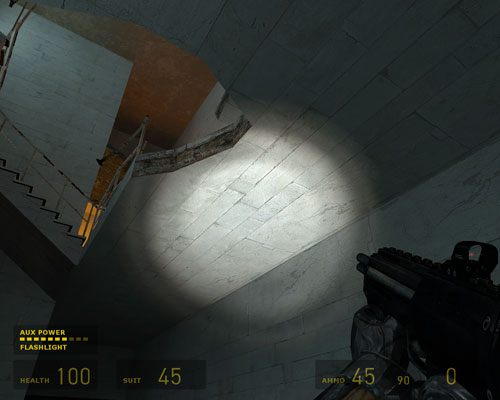 The flashlight at work

Levels with water or any other types of reflective surfaces generally end up being quite GPU intensive as you would guess, so we made it a point to include some water/reflective shaders in our Half Life 2 benchmarks.

But the most important thing to keep in mind with Half Life 2 performance is that, interestingly enough, we didn't test a single card today that we felt was slow.  Some cards were able to run at higher resolutions, but at a minimum, 1024 x 768 was extremely playable on every single card we compared here today - which is good news for those of you who just upgraded your GPUs or who have made extremely wise purchases in the past.

For our benchmarks we used the same settings on all GPUs: 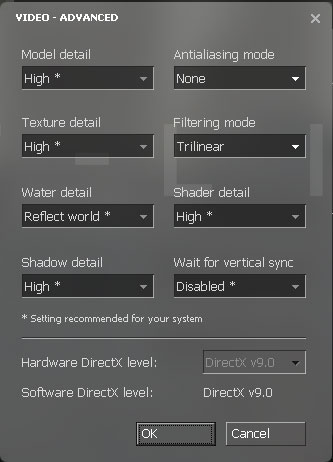 Our test platforms were MSI's K8N Neo2 (nForce3) for AGP cards and ASUS' nForce4 motherboard for PCI Express graphics cards. The two platforms are comparable in performance so you can compare AGP numbers to PCI Express numbers, which was our goal. We used an Athlon 64 4000+ for all of our tests, as well as 1GB of OCZ DDR400 memory running at 2-2-2-10.