Interestingly, even with the BIOS update and AMD’s voltage-frequency curve extension, the voltages being used by our Sapphire Radeon RX 5600 XT are quite tame. The card never goes higher than 0.977v, which is almost 0.05v lower than the Radeon RX 5700, itself already a good deal lower than the full-fat Navi 10-based Radeon RX 5700 XT. While third-tier cards like the RX 5600 XT are uncommon, when we do see them they are normally running higher voltage (leakier) parts, and this is what I was expecting for AMD’s new part.

No wonder AMD is talking up the power efficiency of the card; even with its restricted clockspeeds, not going above 1.0v helps to ensure that power efficiency doesn’t take a dive by paying a massive power penalty to access the last few MHz worth of headroom.

Shifting over to clockspeeds, things look very good for the RX 5600 XT. The card’s clockspeeds are remarkably consistent, and this comes down to the fact that the card is rarely ever entirely power-bound. Rather, the card is running out of room on the voltage-frequency curve, making it very easy to get close to its peak clockspeeds in the process. This goes hand-in-hand with the relatively low voltage, allowing the card to run rather efficiently and avoid heavier power throttling. 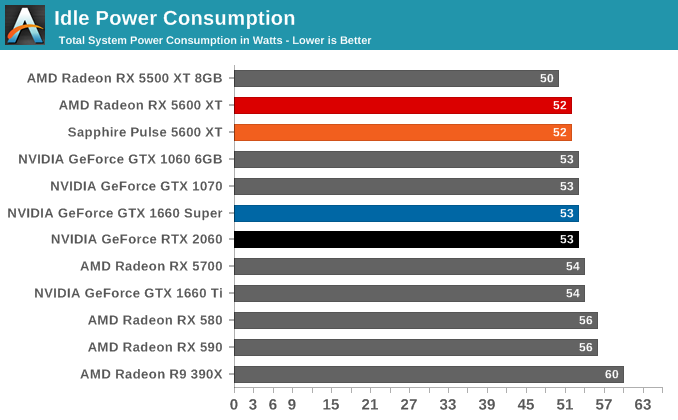 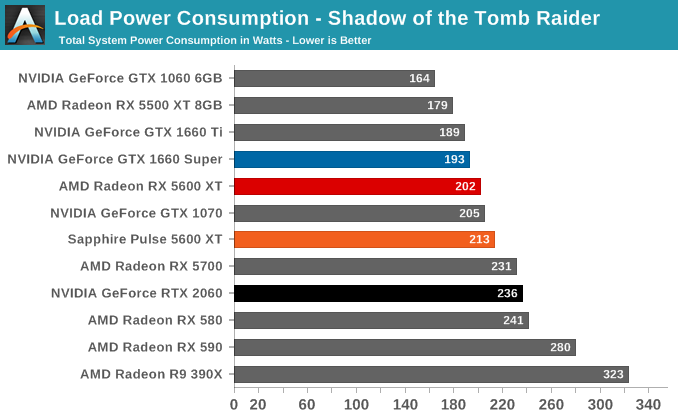 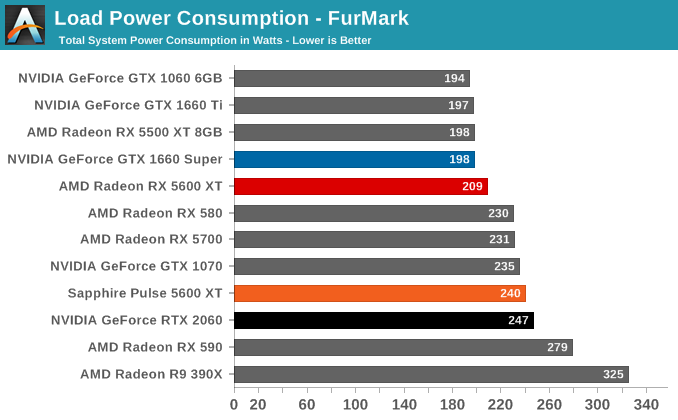 Taking a look at power consumption, we again find a good showing from Sapphire and AMD. The card’s idle power consumption shaves off a couple of watts at the wall relative to the RX 5700, thanks to the lower amount of VRAM and fully idled fans.

Meanwhile load power consumption also fares comparatively well. At reference clocks, we see AMD’s claims of higher power efficiency first-hand; measured at the wall, the card draws around 30W less than the RX 5700. Equally important, this keeps it relatively close to the GeForce GTX 1660 series. And while the RX 5600 XT ultimately ends up drawing more power, as we’ve seen it also handily outperforms those cards.

Sapphire factory overclock, however, is both a curse and a blessing. The blessing is that it improves the card’s performance to RTX 2060-levels, but the curse is that it does so while pushing power consumption to near RX 5700-levels. So when running at full tilt, the Pulse RX 5600 XT is less power efficient than the RX 5700, owing to its overall lower performance. Then again, it’s not like NVIDIA was doing very well to begin with. As a result, even when factory overclocked, the Pulse ends up drawing a bit less power than the nearest NVIDIA card.

I will also quickly note that the delta in power consumption between FurMark and Tomb Raider is higher for the RX 5600 XT than we’ve seen it in other Navi cards. All told, even at 1440p with the highest available settings, Tomb Raider is having a hard time keeping the RX 5600 XT busy enough that the card is running at maximum clockspeeds. This has made Tomb Raider turn into something of a best case scenario, as the card gets to idle a little bit. 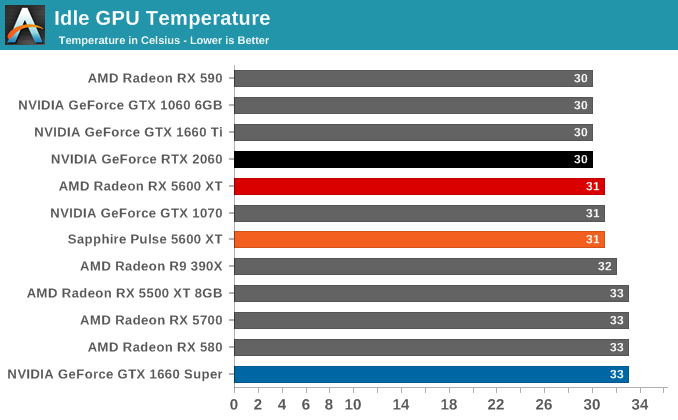 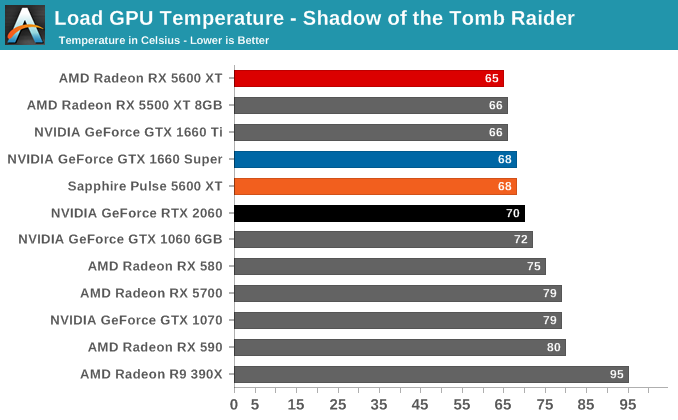 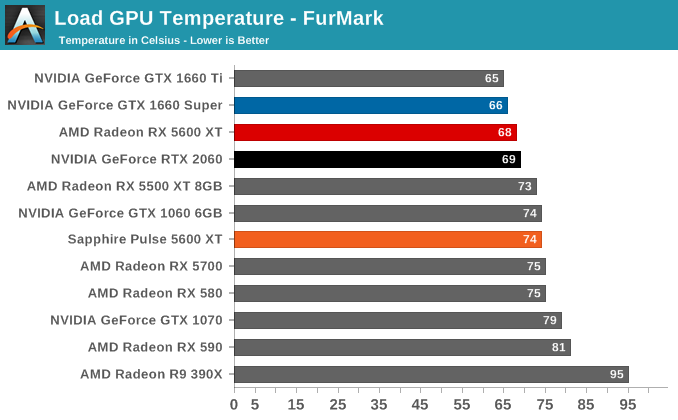 Moving on to temperatures, the large card has no problem cooling itself. In quiet mode the card never passes 68C, and even in full-on performance mode, the temperature maxes out at 74C. From a temperature perspective, Sapphire seems to have just about perfectly tuned the card’s cooler. 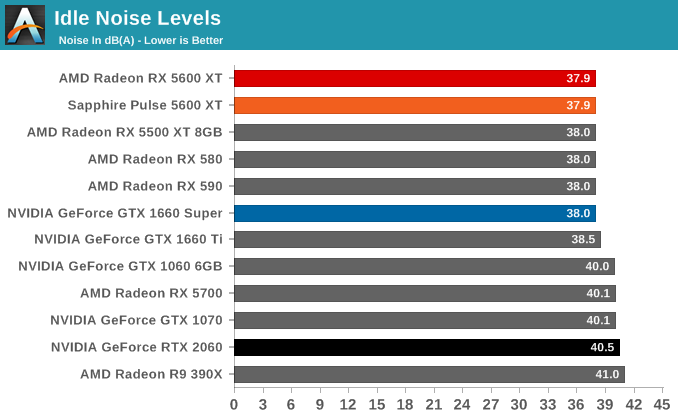 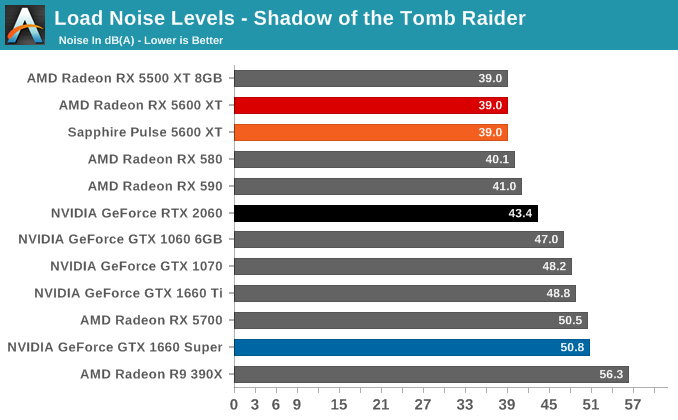 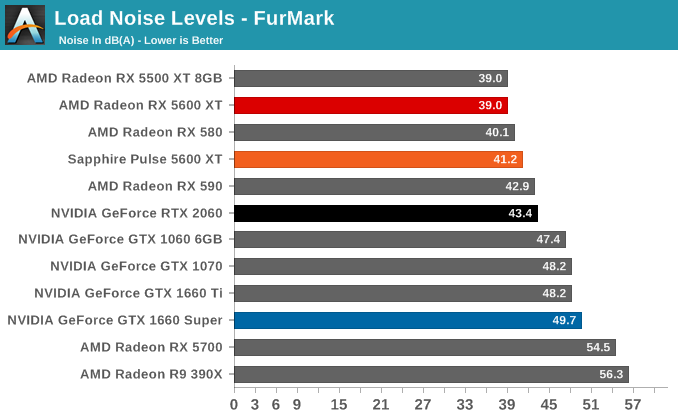 Finally, with noise, we get a chance to see how quietly the oversized Pulse can operate. And the answer is “very quietly”. At idle the card is entirely silent, thanks to its zero fan speed idle mode. Meanwhile with the quiet mode BIOS clocked at AMD’s reference clockspeeds, the fans only have to go to the card’s bare minimum fan speed – 25 percent – to keep the card cool, even under FurMark. To put this in context, we’re looking at a 150W card that’s having all of its cooling needs being met by a pair of fans running at a mere 750 RPM, which is a fraction of what they can actually run at.

Even with the factory overclock active, the cooler has no problem keeping up. Load noise for the 180W mode peaks at 41.2dB(A), which is close to silent and a great result overall. So for as much ribbing as I give Sapphire for the somewhat absurd size of the card, there’s no arguing with the effectiveness of the cooler. It’s quieter than almost every other card in this chart, including the GeForce GTX 1660 series cards and NVIDIA’s own reference RTX 2060.