The Test and Initialization

Obviously, we want to benchmark a few things on our XBOX cluster, but we need some points of reference. To do that, we took a few systems that we had around the lab of various cost and power, and configured them with SUSE Linux 9.1. All of our benchmarks are run without X running, since we want to minimize the load on the systems. Below is a breakdown of several of the systems that we are looking at to compare our XBOX on a desktop level.


As you can see, it's pretty difficult to get a cheap AMD or Celeron system in the fray (cost includes case, CPU, motherboard, memory, hard drive, DVD Player and cooling). All configurations use integrated video. The Semprons and Celerons are going to be much faster than our 733MHz XBOX, although the footprints on the Sempron and Celeron setups are pretty terrible - they take up the full space of a mid-ATX case. The XBOX is also the significantly quieter solution. Unfortunately, the XBOX has very little memory and when we fire X, the XBOX is really going to take a hit in performance.

As you may notice, we are still running SUSE 9.1 instead of 9.2; we haven't had the chance to validate and update 9.2 yet, and our server benchmarks were already done on SUSE 9.1 configurations with GCC 3.3.3.


Our XBOX cluster costs considerably less than a performance workstation or server. The machines listed above were actually tested back in August, so we used the same OS and compiler setup from August. The eight-node XBOX cluster comes in at less than half that of the Opteron or Xeon setup, but of course, cannot offer us 64-bit capabilities amount other things.

Installing SUSE on the XBOX for the first time was not a simple task. The problem is that that the 8GB hard drives shipped with each XBOX is "locked" (you may read more about this here) so that it may only be booted by its own XBOX. There is an old, hacky guide that details how to get the normal XBOX hard drive to boot on a PC so that we can cross-install an operating system. The basic jist of the article follows: This very simple hack exploits the fact that even though the XBOX has a 10GB hard drive, it pretends that only a 8GB drive is installed. We can do pretty much anything that we want on the last 2GB of the drive without the Microsoft BIOS giving us a hard time. Now that you have read all that, be aware that hard drive swapping is the hard way; SmartXX to the rescue. 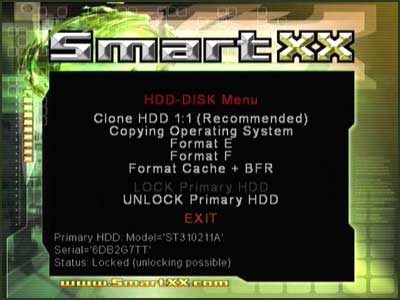 In the SmartXX OS, we actually have a tool to unlock the hard drive completely (or lock it back up later). This saved us a ton of work and we simply unlocked all of the 10GB hard drives shipped with our system. Thanks, SmartXX!