For months, nVidia has been sneaking peeks at their upcoming Dual Video card capabilities, based on a technology known as SLI, or Scalable Link Interface. Not since the PCI Voodoo 2 from 3dfx in 1996 have we seen such a solution from a major graphics vendor. Of course, history saw the original 3dfx die in the market place. The single-slot AGP was introduced, 3dfx lost the video wars, and nVidia purchased what was left of 3dfx.

We have been told that 3dfx engineers had quite a bit to do with the design of the new GeForce 6 series, and that is finally starting to make sense when we see that SLI capabilities are built into the 6 series video cards. Dual AGP would require a custom design, but PCI Express, like PCI in the past, finally provides the kind of platform that nVidia needed to launch a new SLI solution.

While nVidia was not ready to ship nForce4 SLI reference boards for review, they were demonstrating a major manufacturer's nF4 SLI board with a pair of nVidia 6800 Ultra video cards at 1600x1200 resolution at 4x AA. We also got to play with the SLI system with an Athlon 64 4000+ CPU, confirming benchmarks that were supplied by nVidia.


Increases in video performance from 38% to 85% are certainly impressive, and there are gamers and performance enthusiasts who will be flocking to the new nForce4 SLI boards as soon as they start shipping in the next few weeks. Perhaps the most impressive gain here is the performance leap with a pair of SLI 6600GT video cards. Two of these less than $200 cards are actually faster in most benchmarks compared to a single $400 6800GT. This provides an interesting upgrade path for many users. Of course, a pair of 6800GT or 6800 Ultra cards take performance to levels that we have never seen before. 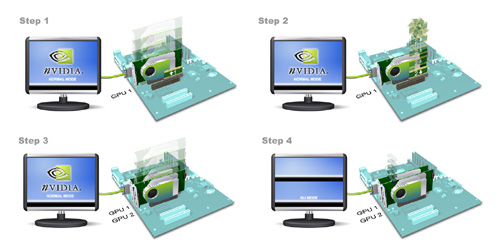 
Shipping boards will allow a single video card of any brand at x16 PCIe or 2 nVidia video cards in two x8 PCIe slots in SLI mode. The SLI boards can be switched easily from x16 to SLI mode by switching a programming card on the board. 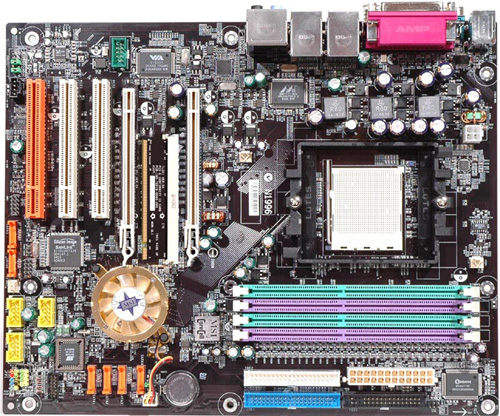 
nVidia says that the first nForce4 SLI boards will be available in the next few weeks from Asus and MSI. Other manufacturers will also be supplying SLI motherboards later this year.