The last of the three TRX40 models from ASUS is the ASUS Prime TRX40-Pro. Part of its Prime series, it blends its usual white and silver aesthetic, with a more professional styling and straight-edge looks. The ATX sized PCB has plenty of features including three full-length PCIe 4.0 x16 slots, three PCIe 4.0 x4 M.2 slots, and eight SATA ports. The Prime TRX40-Pro sits towards the bottom of its TRX40 product stack offering users the basics while remaining competitive with other TRX40 models. 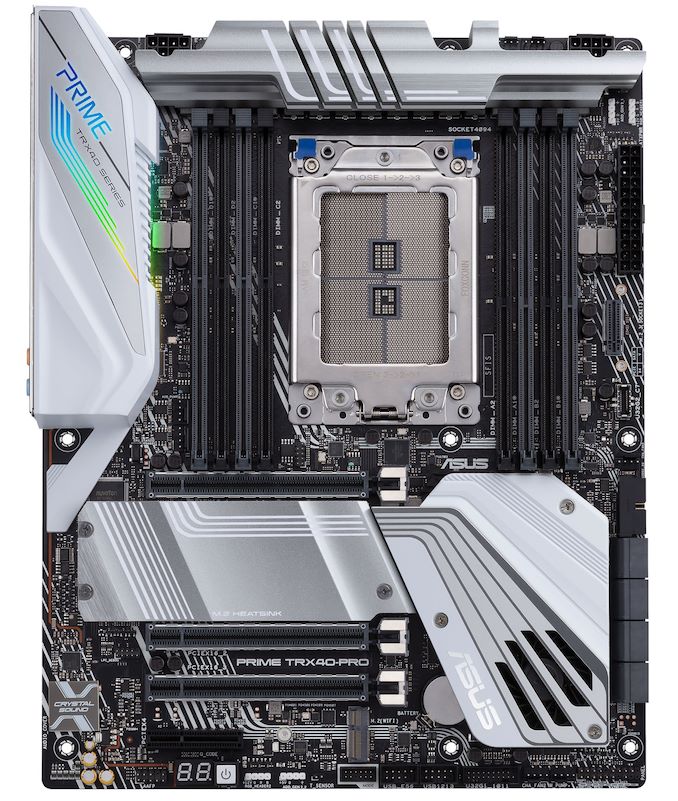 Focusing on the design of the ASUS Prime TRX40-Pro, its main design consists of a silver and white color scheme, with a rear panel cover doubling up as a power delivery heatsink, and a M.2 heatsink which amalgamates into the design of the chipset heatsink. The board has three PCIe 4.0 x4 M.2 slots with two of these sitting underneath a large silver aluminium heatsink, with the other M.2 slot installed vertically; an adapter comes in the accessories bundle. This also includes eight SATA ports with support for RAID 0, 1 and 10 arrays. On the PCIe front, there are three full-length PCIe 4.0 x16 slots, with a smaller PCIe 4.0 x4 slot located at the bottom. Directly below the PCIe 4.0 x4 slot is a power button, and a two-digit LED debugger. Next to this is a

As with the vast majority of TRX40 boards at launch, the ASUS Prime TRX40-Pro has support for DDR4-4666 and 256 GB of system memory across eight slots. The CPU power delivery looks impressive for a non-enthusiast model with a 16-phase design which is controlled by an undesignated controller. We know that ASUS using teamed power stages as they did with its X570 product stack. Delivering power to the CPU is a pair of 8-pin 12 V ATX CPU power connectors, with one located at either side at the top of the board. For cooling, the ASUS Prime TRX40-Pro has seven 4-pin headers which include two for CPU fans, three for chassis fans, one for an AIO pump, and another for a water pump.

Although the ASUS Prime TRX40-Pro omits things like Wi-Fi 6 and uprated 2.5/5/10 GbE ethernet, it still comes with an MSRP of $450. While it may seem a little off the mark in terms of pricing, the Prime TRX40-Pro has a very subtle and professional design, with a competitive feature set, and plenty of storage support for users building a workstation using the AMD Threadripper 3000 series processors.