Moving onto the ASUS ROG Strix TRX40-E Gaming and it's the only TRX40 model currently to include the gaming tag line in its model naming. Cut from a similar cloth to the ROG Zenith II Extreme with its blend of black aluminium inspired design, ASUS has also included its LiveDash OLED into the rear panel cover, with support for DDR4-4666 and 256 GB across eight memory slots also featured. The ROG Strix TRX40-E Gaming is ATX in size and is designed for the gamer in mind, with plenty of features found on most HEDT boards making it a solid all-rounder. 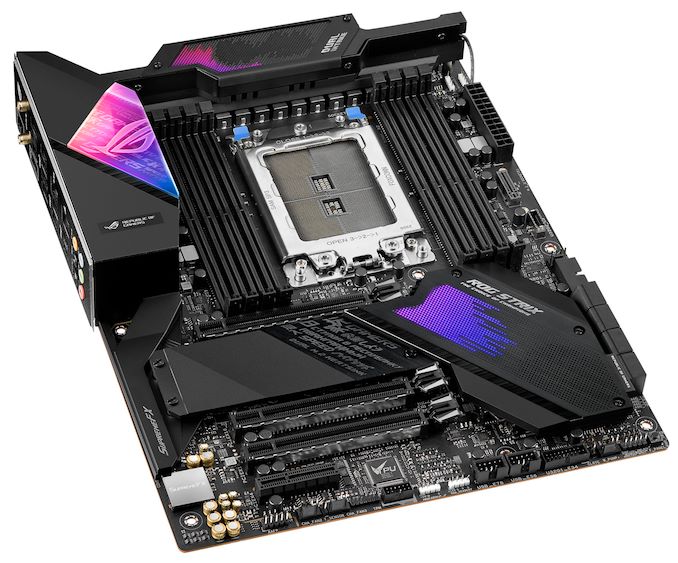 The design of the ASUS ROG Strix TRX40-E Gaming is similar to its other gaming branded Strix models with its holographic digital colorful insignia on the rear panel cover and heatsinks; these areas are also customizable due to the integrated RGB LEDs. The power delivery consists of a 16-phase setup with 16 Infineon TDA21472 70 A power stages which are operating in teamed mode. Its heatsink includes active cooling with fans hidden between the grill and the heatsink, while the TRX40 chipset heatsink also includes a cooling fan. There are three full-length PCIe 4.0 x16 slots, with the inclusion of a PCIe 4.0 x4 slot for good measure.

On the storage front, ASUS includes three PCIe 4.0 x4 M.2 slots, with eight SATA ports supporting RAID 0, 1, and 10 arrays. Memory compatibility on the ASUS ROG Strix TRX40-E Gaming is competitive with support for DDR4-4666, with up to 256 GB supported across eight memory slots. Located around the edge of the board is seven 4-pin headers with two for CPU cooling fans, one for a water pump, one for an AIO pump, and three designated for chassis fans.

The ASUS ROG Strix TRX40-E Gaming isn't the only gaming-focused board, and while AMD's Ryzen Threadripper 3000 processors will almost certainly be capable, the real advantages are had in multi-core optimized applications. With a price tag of $450, it combines a solid controller set with the usual ROG Strix aesthetics we come to expect from ASUS, as well as plenty of networking capability for uses outside of gaming.