To complement the release of AMD's Ryzen 7 nm Threadripper 3000, MSI has released three models. The first of the three and undoubtedly its flagship is the MSI Creator TRX40. Designed for and marketed towards content creators, the Creator TRX40 three integrated PCIe 4.0 x4 M.2 slots, with a further four PCIe 4.0 x4 slots available via the included M.2 Xpander-Aero Gen4 add-on card in the accessories bundle. Other primary features include 10 GbE, a 16-phase power delivery for the CPU, and 20 Gbps USB 3.2 on the rear panel. 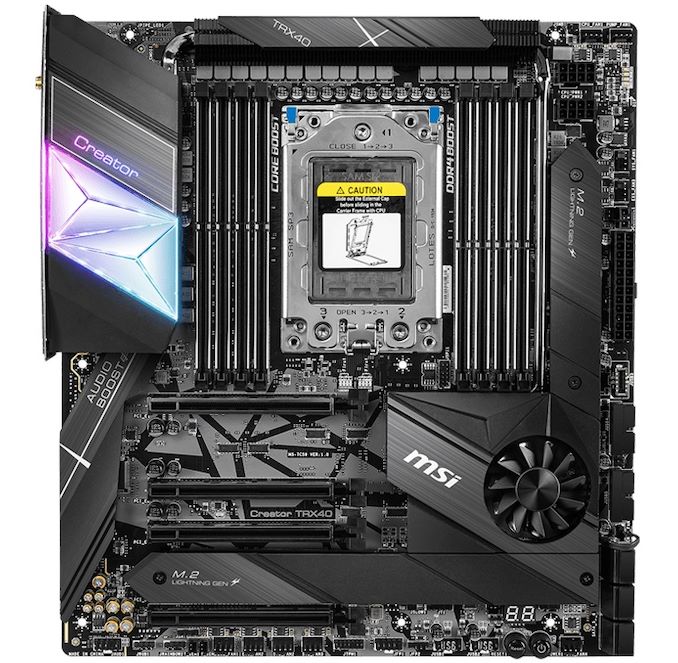 The biggest aspect of the design is the use of a two-tone grey and black theme throughout, including the rear panel cover, the heatsinks, and the PCB itself. The rear panel cover has integrated RGB LED lighting which can be customized with MSI's Mystic Light RGB software, while the design implementations look interesting with the M.2. On the E-ATX PCB is three PCIe 4.0 x4 M.2 slots with each slot covered by an integrated heatsink; one of the slots is vertically mounted alongside the right-hand side memory slots. In the accessories bundle is an MSI M.2 Xpander-Aero Gen4 add-on card which allows users to install up to four PCIe 4.0 x4 M.2 drives into a full-length PCIe 4.0 x16 slot. There are also six SATA ports which support RAID 0, 1, and 10 arrays. Touching on the PCIe support, the MSI Creator TRX40 has four full-length PCIe 4.0 slots which operate at x16/x8/x16+x8.

At present, MSI hasn't unveiled the memory compatibility, as the official specifications state that it supports up to DDR4-3200; we do know this model will support up to 256 GB over its eight slots. MSI's specifications state that up to DDR4-4666 is supported with 1DPC 1R memory, and up to DDR4-3866 with 1DPC 2R memory. For the first time, MSI is using the true 16-phase Infineon XDPE132G5C PWM controller with 16 Infineon TDA21472 70 A power stages for the CPU. Providing power to the CPU is a pair of 8-pin 12 V ATX CPU power inputs which are located in the top right-hand corner of the board.

A total of nine 4-pin headers are located around the edge of the board with one dedicated to a CPU fan, one for a water pump, four for chassis fans, and a further three extend fan connectors. Underneath the actively cooled TRX40 chipset heatsink is a small overclockers toolkit with a two-digit debugger, a power button, and a reset switch.

On the rear panel of the MSI Creator TRX40 is three USB 3.1 G2 Type-A, five USB 3.1 G1 Type-A, and one USB 3.2 G2 20 G Type-C port; the 20 Gbps Type-C port is controlled by an ASMedia ASM3242 USB controller. Looking at the networking and MSI has included an Intel AX200 Wi-Fi 6 wireless interface with BT 5.0 support, as well as an Aquantia AQC107 10 GbE controller. The rear panel also includes an additional port powered by an Intel I211-AT Ethernet controller. At the left-hand side is a Flash CMOS button and Clear CMOS button, while the right-hand side has five 3.5 mm audio jacks and S/PDIF optical output powered by a Realtek ALC1220 HD audio codec. The microphone 3.5 mm input and front panel audio are controlled by the new Realtek ALC4050H audio codec.

The MSI Creator TRX40 is geared up for content creators and MSI has heavily focused on that in the marketing. One element to content creation is storage and with up to seven PCIe 4.0 x4 M.2 drives supported out of the box due to the Xpander-Aero Gen4 M.2 add-in card in the buddle, it adds credence to this. The USB 3.2 G2 20 Gbps Type-C port is the next best thing to Thunderbolt 3, although it's only half the total throughput of TB3 overall, is still a nice touch. Another thing to note is both ASRock and MSI have a TRX40 Creator model in its line up; it's not good for users and creates confusion. The Creator TRX40 is MSI's current flagship for the Threadripper 3000 launch and has an MSRP of $700.