The last of GIGABYTE's four announced TRX40 models is the GIGABYTE TRX40 Designare which takes a more professional approach for content creators and workstation users. With a more subtle and elegant black and silver theme, the Designare looks to feature the basic necessities such as an Intel Gigabit Ethernet controller and Realtek ALC4050H and ALC1220 pairing for the onboard audio. Differentiating the TRX40 Designare from the rest of the GIGABYTE TRX40 product stack is a GC-Titan Ridge Thunderbolt 3 AIC add-on card included in the accessories bundle. 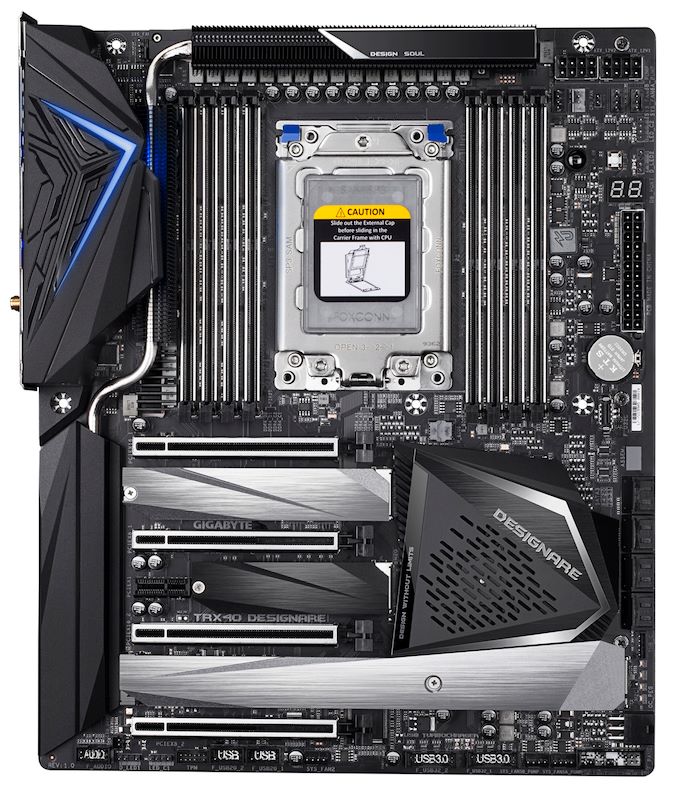 The GIGABYTE TRX40 Designare is an XL-ATX sized motherboard and follows suit with the rest of its TRX40 product stack in memory specifications with support for DDR4-4400 and up to and including 256 GB of system memory. Like with most HEDT models with eight memory slots, they are arranged in two sets of four which sit either side of the large sTRX4 CPU socket. At the bottom of the board is four full-length PCIe 4.0 slots which operate at x16/x8/x16+x8, with a single PCIe 4.0 x1 slot in the centre. Located in between the full-length PCIe 4.0 slots are four PCIe 4.0 x4 M.2 slots; two driven by the CPU and two coming from the TRX40 chipset. Also powered by the chipset is the eight SATA ports which feature support for RAID 0, 1, and 10 arrays.

GIGABYTE has been consistent with its power delivery implementation on its new models supporting the 7 nm Threadripper 3000 processors. Driving the 16-phase CPU power delivery is the Infineon XDPE132G5C PWM controller with sixteen Infineon TDA21472 70 power stages arranged into a 16+0 configuration. The power delivery heatsink is interconnected with other components via a heat pipe and stretches around the board in an L shaped design. The TRX40 chipset heatsink includes an active cooling fan, while for CPU and system cooling, there are eight 4-pin headers in total. One is designated for a CPU fan, one for a water pump, and six for chassis fans.

On the rear panel of the GIGABYTE TRX40 Designare is five USB 3.1 G2 Type-A, one USB 3.1 G2 Type-C, and two USB 2.0 ports. On the left-hand side is Clear CMOS and Q-Flash buttons, while on the other side is five 3.5 mm audio jacks and S/PDIF optical output powered by a Realtek ALC4050H and ALC1220 HD audio codec pairing. There is also a pair of networking ports powered by a pair of Intel Gigabit Ethernet controllers, while the Intel AX200 Wi-Fi 6 wireless interface adds BT 5.0 connectivity on top.

The GIGABYTE TRX40 Designare is aimed more at professionals and content creators with the Thunderbolt 3 AIC card included in the accessories. It drops 5 G or 10 GbE wired networking while sitting giving users dual Ethernet, and as expected, costs quite a bit less than the TRX40 Aorus Xtreme with an MSRP of $629.