Moving our way down the GIGABYTE TRX40 product stack, we have the GIGABYTE TRX40 Aorus Pro WIFI which represents its entry-level model at launch with a good feature set but drops some of the higher-end components to undoubtedly save users money who may not need or require things like 10 GbE. This doesn't mean the feature set isn't good quality as there is an Intel AX200 Wi-Fi 6 wireless interface, three PCIe 4.0 x4 M.2 slots, and support for DDR4-4400 memory across eight slots. 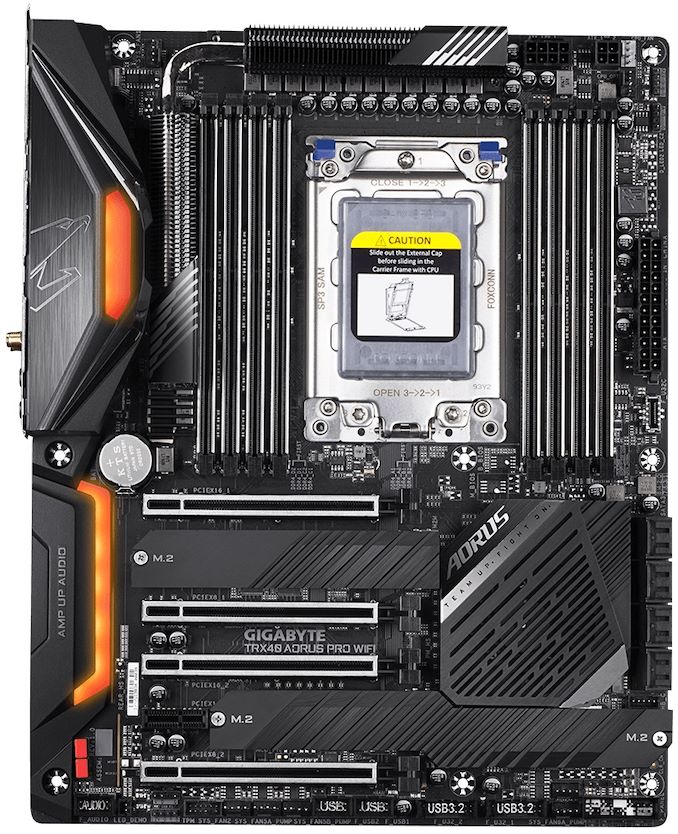 The GIGABYTE TRX40 Aorus Pro WIFI and TRX40 Master share a very similar aesthetic with black metallic heatsinks on an all-black PCB, although the GIGABYTE TRX40 Aorus Pro WIFI is using a standard ATX sized PCB. There are eight memory slots which support up to DDR4-4400 and up to 256 GB in total, with two sets of four slots flanking either side of the sTRX4 CPU socket. All three of GIGABYTE's launch day TRX40 boards are using the high-end Infineon XDPE132G5C 16-phase PWM controller operating at 12+2. The CPU section of the power delivery is a 14-phase design which consists of twelve Infineon TDA21472 70 A power stages for the CPU. Providing power to the CPU is an 8-pin and 6-pin pair of 12 V ATX CPU power inputs.

Cooling the TRX40 chipset is an actively cooled heatsink, while the boards three PCIe 4.0 x4 M.2 slots each include an M.2 heatshield. For users looking to use SATA drives, the GIGABYTE TRX40 Aorus Pro WIFI has eight SATA ports which support RAID 0, 1, and 10 arrays, and are controlled by the TRX40 chipset. Located around the board is eight 4-pin headers which are split into three main sections; one for a CPU fan, one for a water pump, and six for chassis fans. Utilizing as many of the PCIe lanes from the CPU are four full-length PCIe 4.0 slots which operate at x16/x8/x16+x8, with a single PCIe 4.0 x1 slot for good measure.

Unlike the other models in the GIGABYTE TRX40 product stack, the TRX40 Aorus Pro WIFI has a single Ethernet port controlled by an Intel Gigabit controller. For users looking for wireless support, GIGABYTE has included an Intel AX200 Wi-Fi 6 wireless interface which also features BT 5.0 connectivity. Looking at USB support and there is five USB 3.1 G2 Type-A, one USB 3.1 G2 Type-C, and four USB 2.0 ports. Nestled on the left-hand side of the USB 3.1 G2 Type-C port is a small Q-Flash Plus button, while the five 3.5 mm audio jacks and S/PDIF optical output are powered by a pair of Realtek HD audio codecs; an ALC4050H and an ALC1220-VB.

The GIGABYTE TRX40 Aorus Pro WIFI isn't as high-end as its other launch day counterparts, but it still offers a cheaper alternative to users looking to utilize the high core count and power of the Threadripper 3000 processors with an MSRP of $399. Users looking to build a high-core high-thread-count gaming system will be hard pushed to find a better value TRX40 model at launch.