In terms of 3D gaming and GPU performance, we expect the Kirin 990 and the Mate 30 Pro to do quite well. The GPU itself is not only a large step up from the MP10 configuration on the Kirin 980, but also larger than Samsung’s Exynos 9820 MP12 implementation. Huawei also claimed to be able to achieve better performance than the Snapdragon 855, which seems quite plausible. The remaining question is how power efficiency ends up and how the Mate 30 Pro’s thermal management is able to sustain the performance of the chipset for prolonged durations. 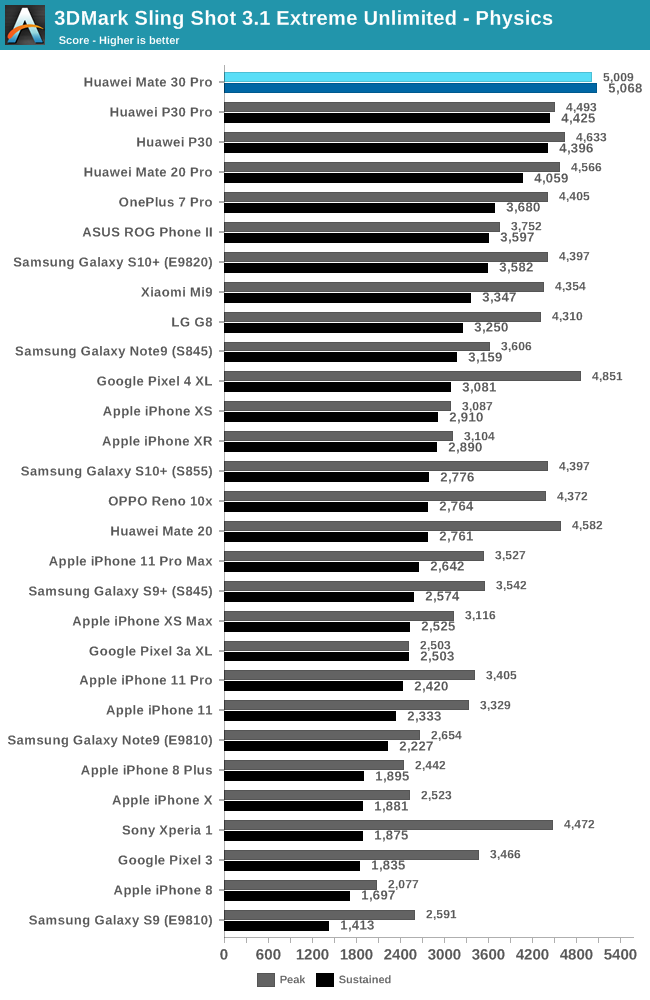 On the 3DMark Physics test which is actually a CPU benchmark within a 3D workload, we see that the Mate 30 Pro is showcasing some extremely high results, actually taking the top spot amongst all devices in the market. The benchmark should be mainly memory intensive and the Cortex A76’s strong prefetchers as well as the Kirin 990’s strong memory subsystem would be a possible explanation for the top performance results. 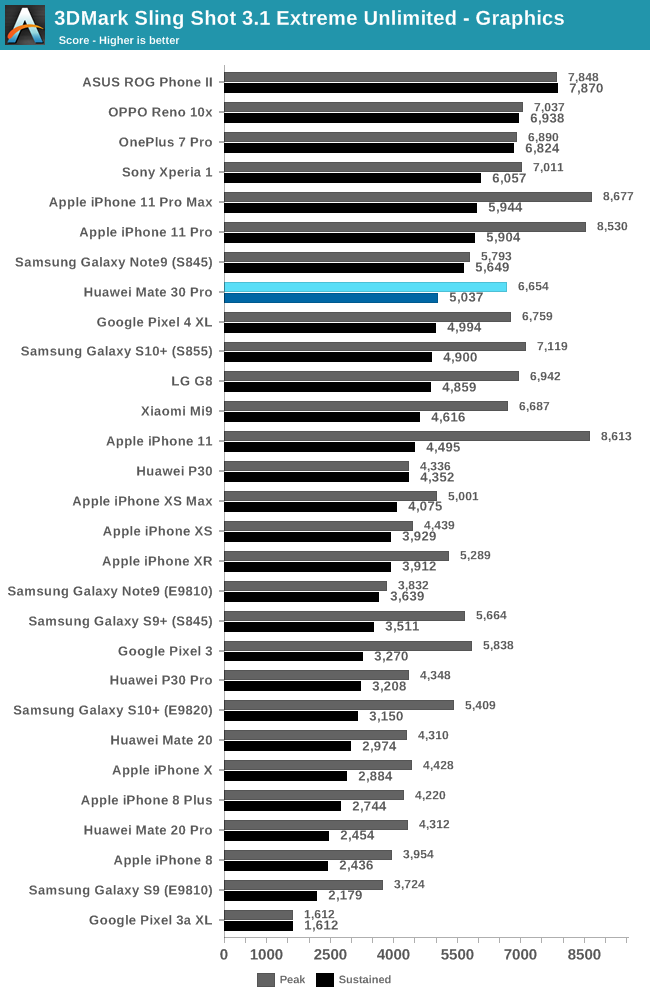 Switching over to the graphics workload, the Mate 30 Pro makes a very large leap compared to previous generation Huawei flagships, but falls short of some of the better Snapdragon 855 devices as well as Apple’s newest iPhone 11 lineup. 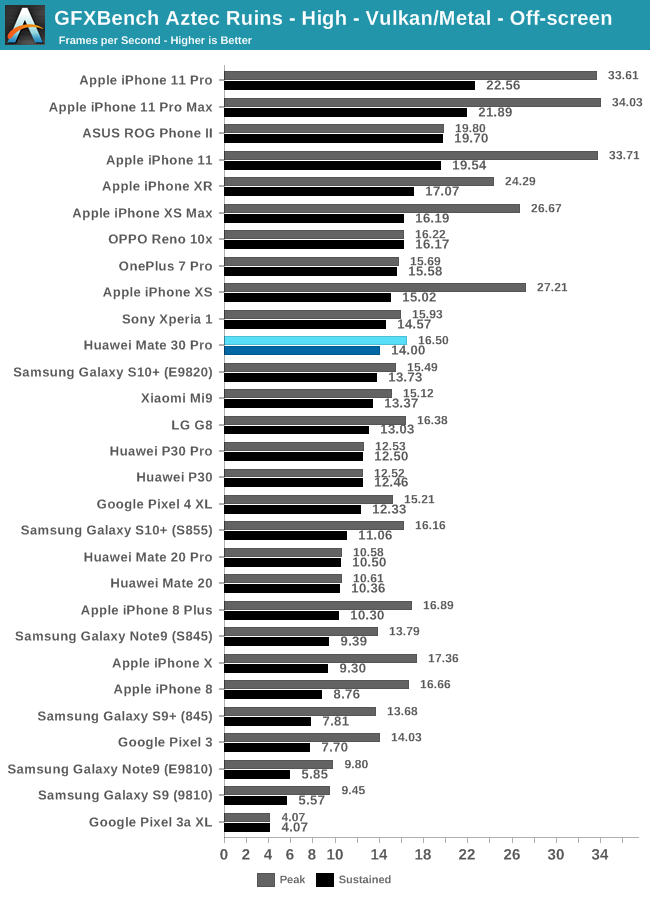 In GFXBench Aztec, the Mate 30 Pro takes an ever so slight lead ahead of Snapdragon 855 devices, but still falls short of Apple’s new architectures.

The power characteristics of the chip are quite good and clearly a step ahead of both the Snapdragon 855 and Exynos 9820, sporting higher performance as well as lower absolute power. 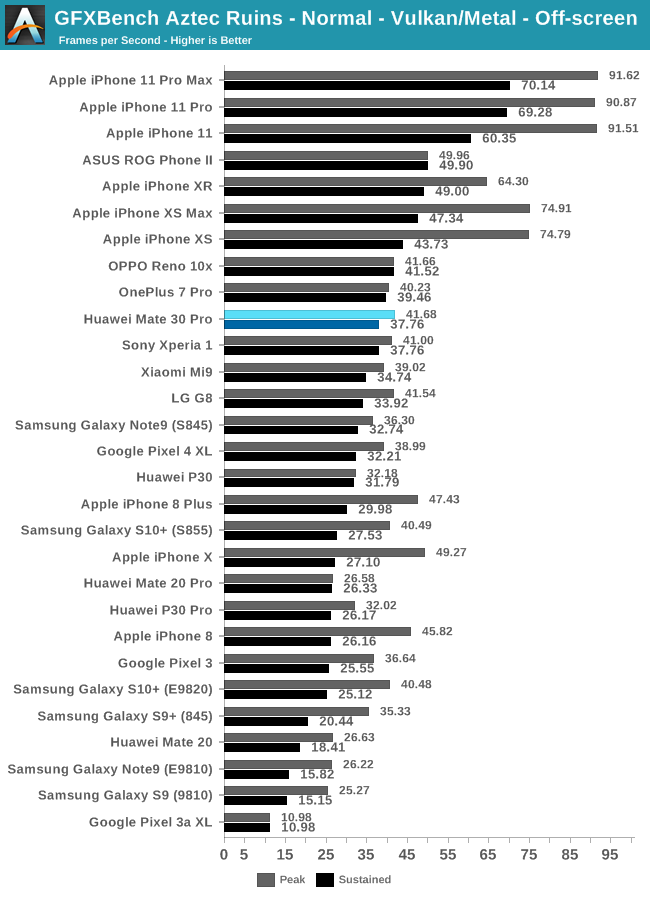 We see similar results in the Normal 1080p variant of the benchmark. 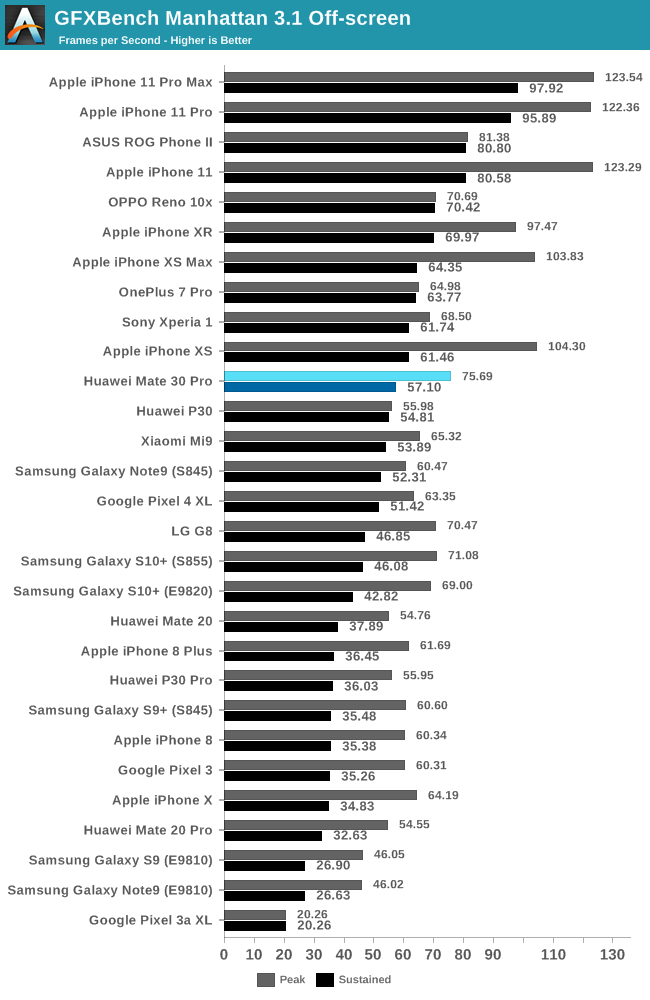 In Manhattan 3.1, what does change is that the device’s power usage goes up from 4 to 5W. Such a change usually happens when the GPU and SoC is able to achieve a higher utilisation of the silicon. Still, it’s slightly ahead of the Snapdragon 855 in terms of performance and efficiency. 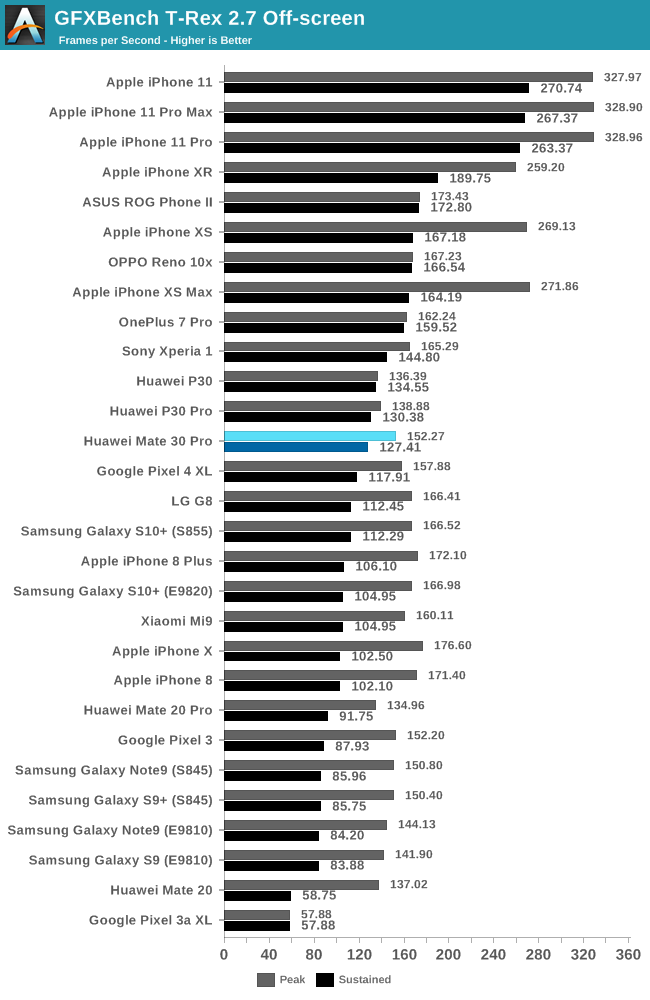 Finally, in T-Rex, the results are in line with the Snapdragon 855, although this time around it doesn’t manage to pass the competitor.

Overall, the Kirin 990 and the Mate 30 Pro are good performers. In general, I’d say Huawei and HiSilicon were able to match and sometimes slightly beat the Snapdragon 855 in terms of performance all while maintaining good efficiency. In my prolonged testing I saw the phone max out at a peak skin temperature of 45°C which wasn’t too bad. What was odd though is that this hotspot was very pronounced towards the top side of the phone’s frame – so when you’re gaming in landscape mode this going to be always touching your palm or fingers when holding the phone.

Whilst the results are good in context of the competition this year, there’s the issue that we expect the next generation of Snapdragon and Exynos devices to easily be able to top the Kirin 990, and of course it’s still far behind what Apple devices are able to showcase in terms of performance as the A12 and A13 were able to sport outstanding generational increases.