We’ve seen that the new Kirin 990 does in fact still pack quite a bit of punch in regards to the CPUs due to the new memory subsystem, so now the question is how this translates into overall system performance. The Mate 30 Pro ships with Android 10 (technically, AOSP 10), so it should be an interesting comparison.

As with other Huawei devices over the last year, we’re testing the chip in its “High performance” mode in the battery settings as this is the equivalent to the intended performance of the chip, and the default state of the phone is more of a light battery saving mode. This is in contrast to some other Chinese vendor’s High Performance modes which is more akin to a cheating mode for benchmarks. 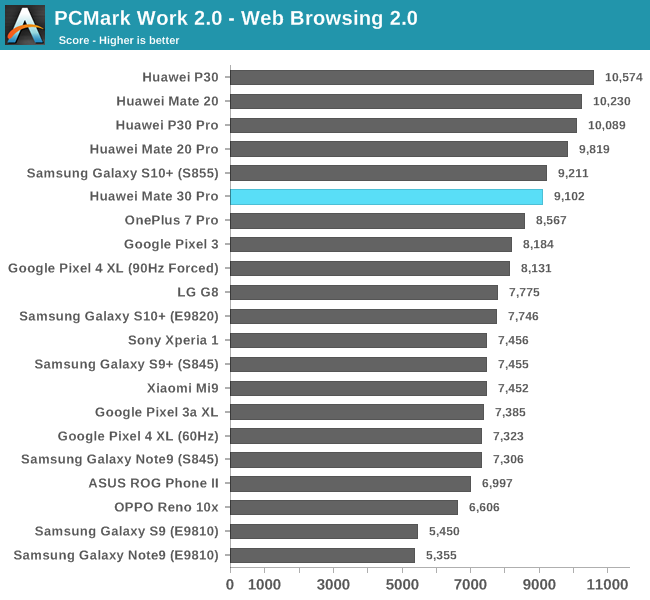 In the web browsing test, the Mate 30 Pro here fares slightly worse than the Kirin 980 devices. I haven’t seen evidence that the Kirin 990 is scaling slower than the Kirin 980, so the differences here might be related to the new memory subsystem. If the A55 cores indeed have access to the SLC, this would mean there would also be a larger latency penalty to DRAM, and it possibly might be a reason why PCMark’s rather light web browsing test is sensitive to performance changes here. 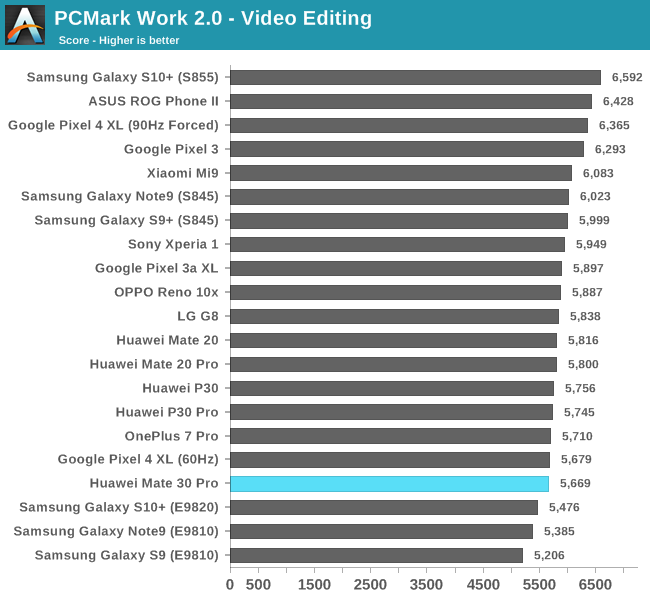 We’ve seen the video test to be quite outdated here and mostly related to very fine scaling behaviours as well as screen refresh rates. 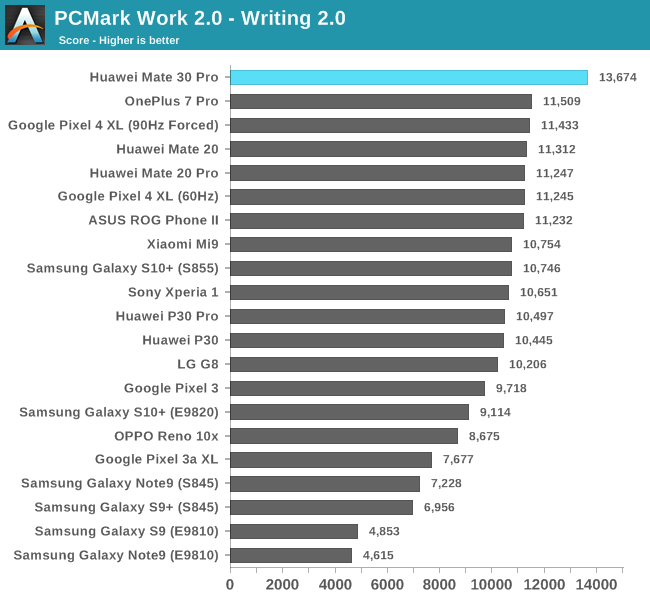 The Writing sub-test is the most important in the whole suite as it’s post representative of real world performance, and here the Mate 30 Pro’s performance is simply a step ahead of every other phone in the market, showcasing a similar large step-increase as we’ve seen in some of the memory bound benchmarks in SPEC. 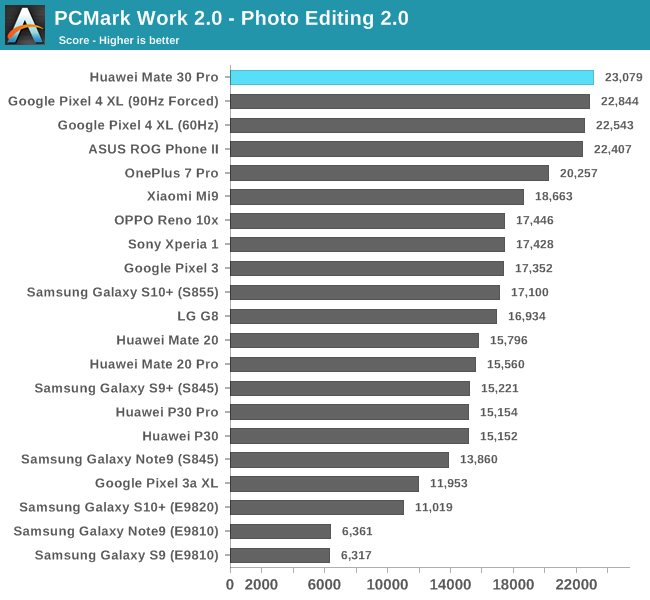 The Photo Editing scores are also significantly better for the new phone, although due to the workload being a RenderScript task, we’re not sure if this is due to Android 10 or changes in the software stack or DVFS of the GPU of the new phone. In any case, the new results are excellent and just slightly ahead of the best Snapdragon 855 devices. It’ll be interesting to see Kirin 980 devices here once they’ve been updates with the new OS and if that improves the scores in any way. 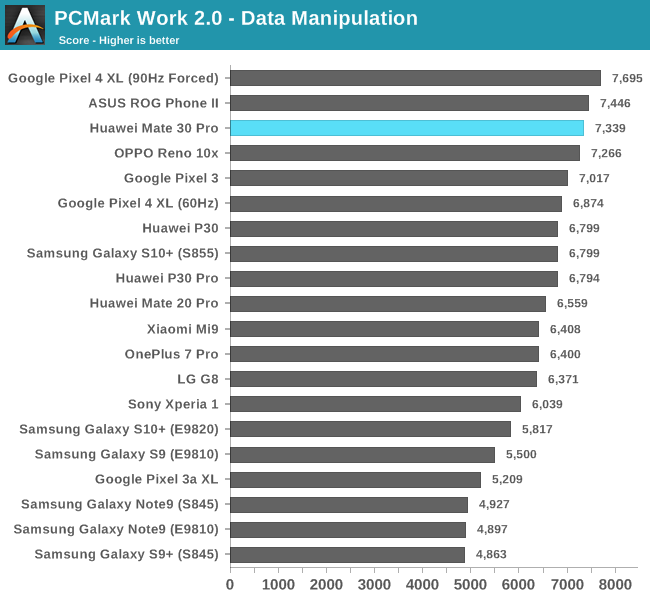 Data Manipulation test scores are again quite high, although the differences to other phones is smaller here. 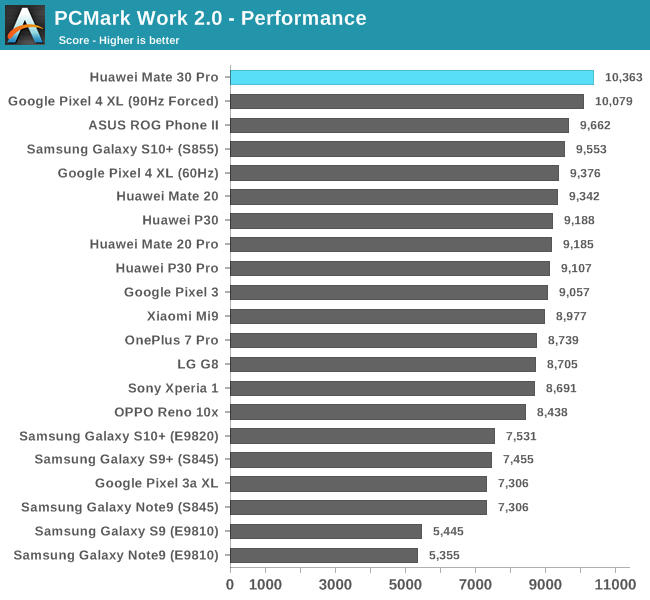 Overall in PCMark, the Mate 30 Pro takes the top spot amongst all Android devices, which given that it’s the phone with the strongest hardware to date, isn’t too surprising. 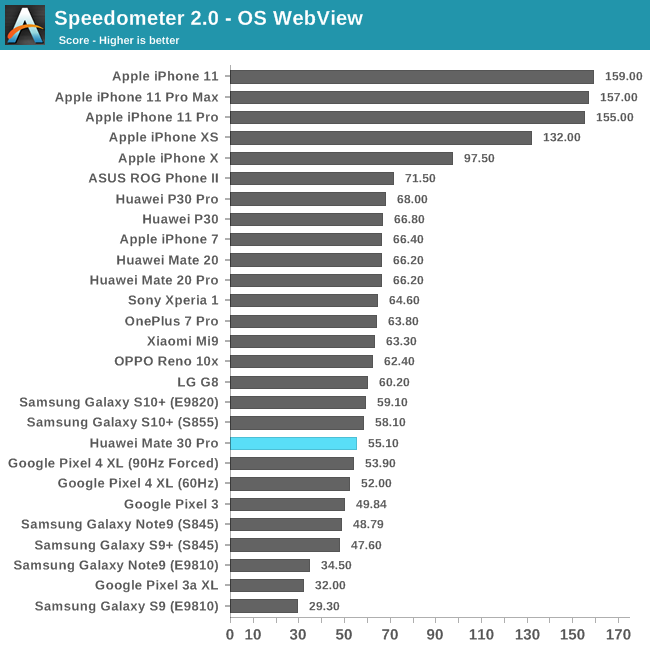 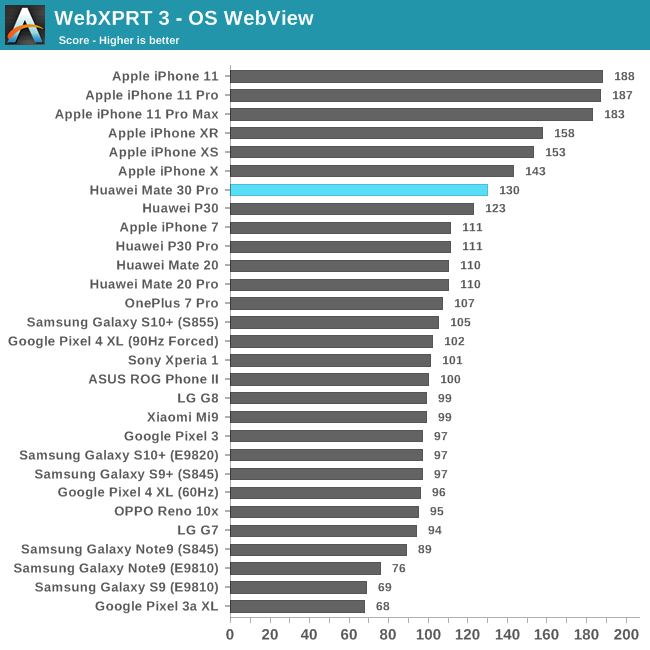 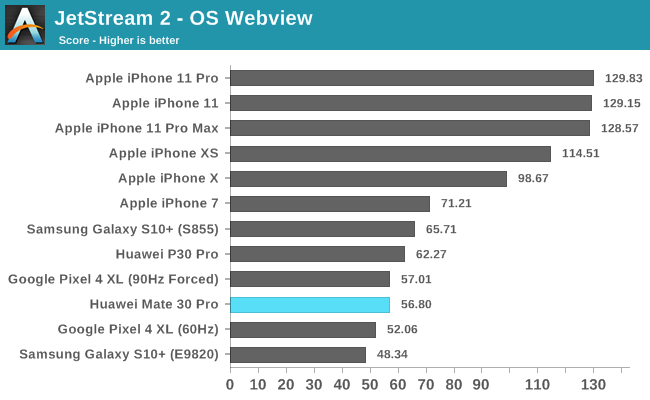 Oddly enough, the phone didn’t do too well in the web benchmarks, sometimes falling behind the Kirin 980. I don’t believe this would be due to the hardware, but rather to maybe some software issues with the BSP and Android 10. Over the last few months I’ve seen some odd changes in WebView performance in recent updates across a larger swath of phones, some showing degradations. It’s definitely something I would blame on Google rather than Huawei in this case.

Overall, the Mate 30 Pro has been for me visibly the fastest Android device to date. It’s quite noticeable that it shows more responsiveness than any other device this year and is ahead of other fast devices such as the Galaxy S10 or the Pixel 4. Huawei definitely did a good job here and I think it’s one of the Mate 30 Pro’s strong points.