With the latest and greatest CPU platform, Dell also gets access to the latest and greatest wireless solution, which in the case of the XPS 13 7390 2-in-1 is the Killer AX1650. Killer had a rough go at wireless when they were based on Qualcomm underneath, but since the move to Intel hardware under the hood the company’s reliability has improved dramatically, which is no surprise since the Intel drivers and wireless offerings are the best available in the PC space right now. Whether the extra software features Killer brings to the table is an something you are after or not, there is no longer any downside thanks to the improved platform. For a look into the extra features, check out Ian’s article from the launch of this new Wi-Fi 6 based network adapter. One feature that is certainly interesting is the xTend setting which allows the laptop to be connected to an access point, and also allow itself to be an access point, to extend the range if necessary. 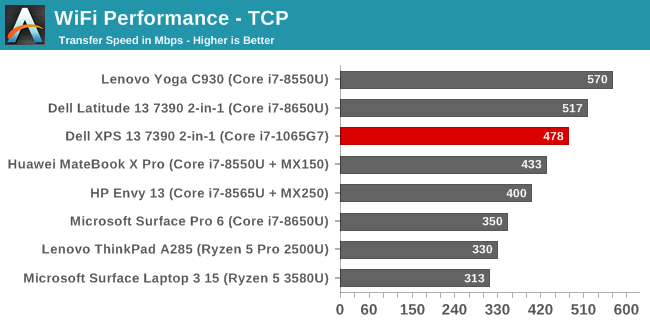 Performance was quite good, although our access point for testing is still Wi-Fi 5 based, as are most routers around. If you have access to a Wi-Fi 6 access point, and have something to connect to on the other end, performance should be even better. But perhaps even more importantly, the reliability of the connection was flawless, with no dropped connections, delays when waking from sleep, or any other nonsense which can be a major headache to fight through.

Dell outfits the XPS with Waves MaxxAudio Pro stereo speakers with 2 Watts of power each, and the speakers automatically adjust based on the mode the 2-in-1 device is in. Dell claims the MaxxAudio Pro 8.0 audio processing can produce 260% more perceived bass. The overall sound quality is ok, with a reasonable low-end for such a thin and light device. The speakers don’t get overly loud, hitting around 75 dB(A) measured one inch over the trackpad, but the clarity is good. 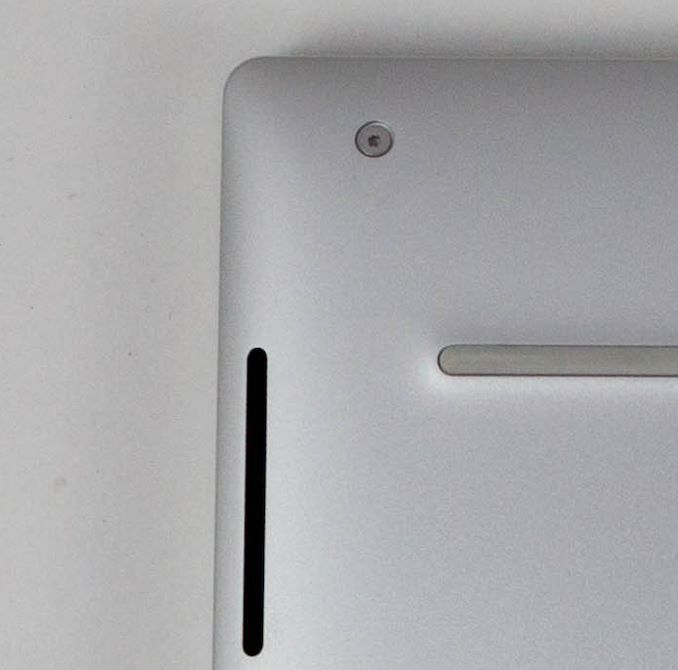 Dealing with heat is one of the biggest challenges with a thin and light device, and despite Intel dropping to a smaller process node, they’ve kept the TDP the same 15-Watt nominal as the previous 14 nm, so while overall energy efficiency is up thanks to the new architecture and process, the laptop still has to deal with the same thermal requirements.

To deal with the heat, Dell is utilizing two fans and vapor chamber cooling. The new cooling system’s vapor chamber was custom-designed by Dell to offer a thinner solution to more traditional heat pipes, and Dell exhausts the air out the hinges. 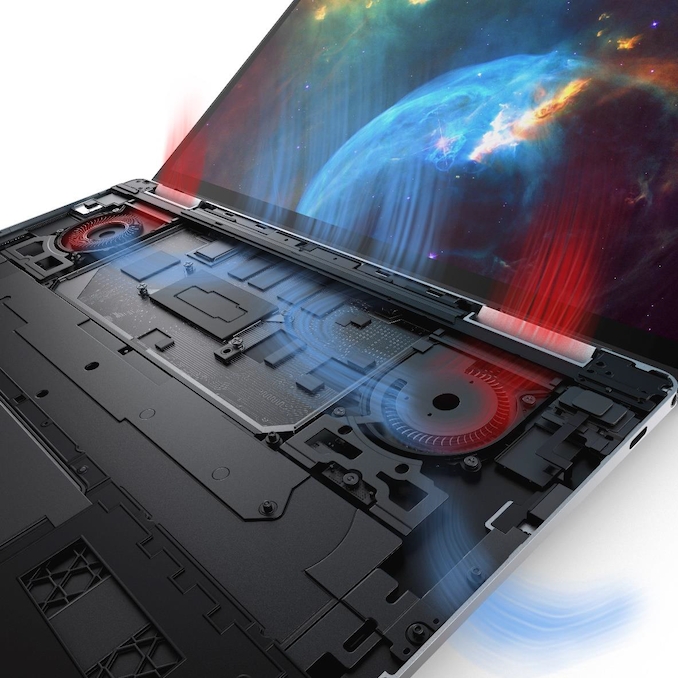 Dell also offers some additional control over the laptop’s cooling in the Dell Power Manager application. You can choose among four settings: Balanced, Cool, Quiet, and Ultra Performance. The default of “Optimized” offering a balanced of noise and temperature, or you can choose to keep the laptop quieter at the expense of surface temperatures, cool at the expense of performance, or maximum performance which has the highest surface temperatures and the loudest fan noise. These settings seem to change the PL1 and PL2 levels of the processor as well, allowing longer sustained performance, or lower power levels to keep the temperatures down, depending on the setting. 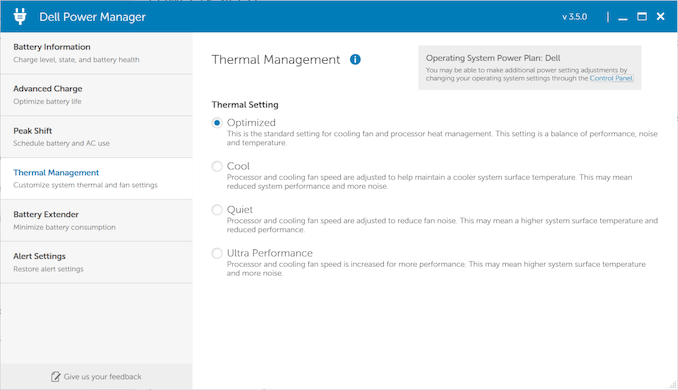 To see how the system handled the Ice Lake platform, it was set to Ultra Performance and a system stability test was run to peg the CPU at 100% load. When in this mode, the CPU sustained a PL2 of almost 40 Watts for a short time, before settling into the PL1 state with power still around 25 Watts draw. In this setting, Dell allows the CPU to throttle itself for the most part, which means the CPU would hit 100°C and then thermally throttle to maintain that temperature. Even after several hours, the system was still drawing over 25 Watts which was quite impressive for such a thin machine. 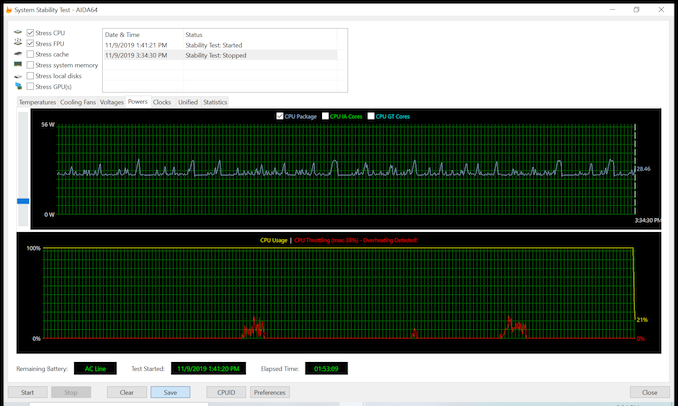 To see how the system would react to a more real-world performance requirement, a Dota 2 match was queued up which is close to 50 minutes in length. This would also tax the GPU heavily, as well as the CPU since Dota 2 is a pretty CPU bound game. 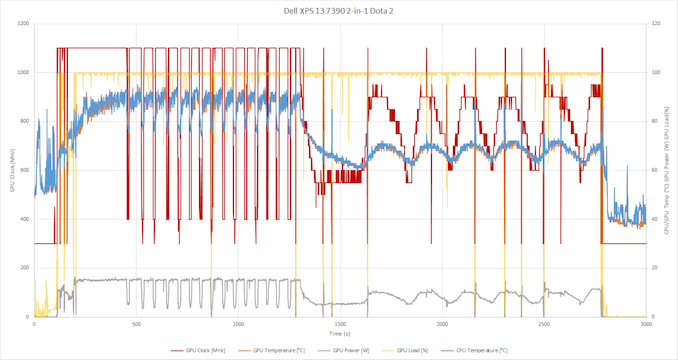 Here the results were not as strong as a purely CPU bound test. With the CPU and GPU both fighting over the same power and thermal budgets, there was more conflict before the system settled into a somewhat steady state after around 20 minutes. For the first 20 minutes, the GPU was allowed to pull 15 Watts until the system needed to cool down, where it would briefly drop GPU performance before ramping back up to the maximum 1100 MHz. After the initial burst of maximum performance, the GPU frequency was reduced along with the maximum power, which kept the temperatures down. This is likely due to the surface temperatures of the device getting too warm. 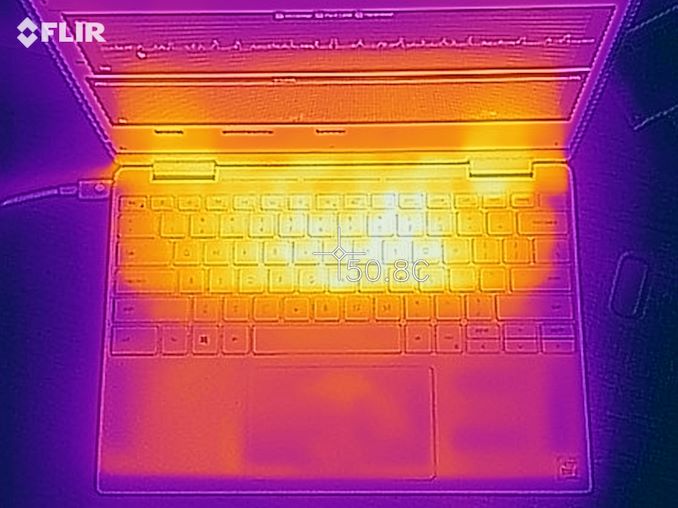 So overall, the thermal solution is a bit of a mixed bag. The fans can move quite a bit of air, and at maximum cooling they are a quite loud 48 dB(A) measured one inch over the trackpad. Extended gaming sessions are going to be a challenge on such a thin and light device, and that certainly was the case here. But for pure CPU performance, the system was able to maintain a very high level of constant power for an extended period of time.

Plus, when not under really heavy loads, the XPS 13 stays more or less silent all of the time. There are very few random noises from the fans, and the review unit we received suffered no coil whine from the device or power supply.

It would be nice for Dell to adjust their power delivery slightly though, to not have the GPU bouncing so significantly under load. Hopefully they can address that in a software update to their Dell Power Manager suite. A slightly lower overall power setting would likely lead to a smoother result, avoiding the sudden drops in GPU frequency when the system needs to quickly cool down when in the Ultimate Performance setting. The default Optimized setting keeps the power in check from a much earlier time, meaning it would likely be better in this example.

As with most new laptops, Dell bundles in utilities which should enhance the experience. We’ve already touched on the Dell Power Manager briefly, but it does more than just adjust the thermal profile of the XPS 13. It also provides settings to change the battery charging, allowing express charging when the laptop is off, and which will provide an 80% charge in one hour using the full 45 Watts from the adapter. If you normally leave the system plugged in, you can change to the AC setting which will keep the battery undercharged to prolong its life. Adaptive is one that is recommended and adjusts the settings for you, or you can choose a custom setting as well which allows you to choose when to start charging and when to stop. The software also allow you to set a schedule for charging, and there’s an additional battery extender if you know you need the maximum battery life you can get, which can reduce CPU performance, set a lower maximum display brightness, and adjust the sound and keyboard illumination. The Dell Power Manager is nicely laid out, easy to use, and a great addition. If anything, it would be nice if there was a keyboard shortcut to change between power modes quicker, but that’s a small complaint. 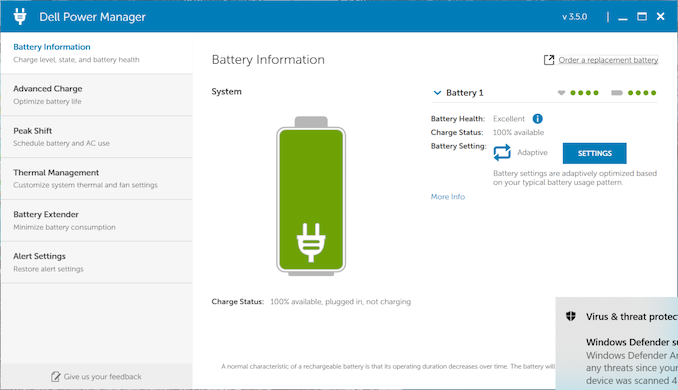 Dell also has the now expected updating tool, which makes firmware and driver updates a breeze. Dell has additional utilities to connect to your phone, some cloud storage, and support options. All of these are now somewhat industry standard additions, but Dell has done a nice job with the layout and look of their apps, making them easy to use and modern looking. 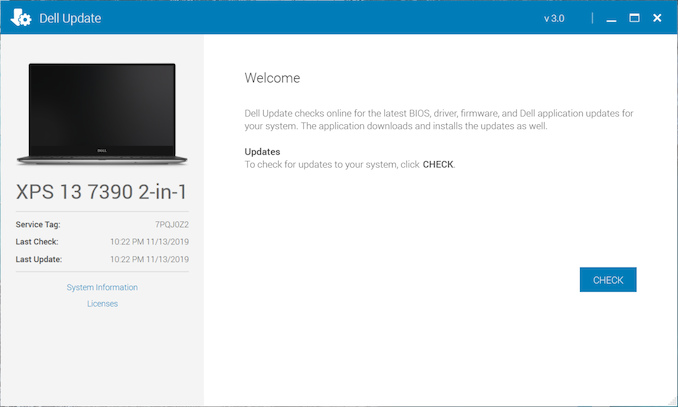 Dell does ship the system with a McAfee LiveSafe, which you can easily remove if unwanted.