For our final video card review of the year, the GeForce GTX 1650 Super admittedly doesn’t bring any surprises. But then it didn’t need to. As the 4th TU116 card released this year alone, and the 12th Turing GeForce card overall, we generally have a good grip on what the current generation of GeForce cards can do. All that’s really needed to change was for NVIDIA to get a better grip on what the market is looking for in performance for a sub-$200 card, and with the GTX 1650 Super they’re finally doing that.

Looking at things on a pure performance basis, the GTX 1650 Super makes significant strides over the GTX 1650, never mind NVIDIA’s last-generation cards. As it should: it offers a very hefty increase in the number of CUDA cores as well as memory bandwidth, and even with the TU116 GPU in its cut-down state for this card, it’s still just a whole lot more GPU than the TU117 in the GTX 1650. NVIDIA has thrown significantly more hardware at this segment, and the net result is a big performance boost.

And just in time as well. The launch of AMD’s rival Radeon RX 5500 XT immediately took the original GTX 1650 down a peg, as AMD’s card offered a lot more performance for only a small increase in price. So one way or another, the GTX 1650 Super is NVIDIA’s counter-play to AMD’s new card.

The outcome is surprisingly even-handed between AMD and NVIDIA. With regards to framerates, the $159 GTX 1650 Super and the $169 RX 5500 XT 4GB are at a dead heat. As is usually the case, the cards are anything but equal on a game-by-game basis, constantly trading wins and losses, but at the end of the day they’re fighting over the same market with the same performance. NVIDIA has a slight edge in price, and perhaps an even slighter edge in overall energy efficiency, but that’s it. As a result, the GTX 1650 Super is significantly better than the GTX 1650, but it’s not able to meaningfully pull ahead of AMD’s card.

Meanwhile, although the original GTX 1650 is now well outclassed in terms of performance, the card isn’t going anywhere, and for good reason. It remains NVIDIA’s best option for the 75W market. GTX 1650 Super improves on performance by almost 33%, but it requires just as much additional power to get there. For system builds that aren’t sensitive to power/thermal needs, then this isn’t going to matter, and the GTX 1650 Super is well worth the $10 price premium. Otherwise the original GTX 1650 is still the best card available for the 75W, maximum compatibility PCIe-slot-power-only market.

Though like last week’s Radeon review, I’ll also note here my general hesitation with cards that have 4GB of VRAM. VRAM isn’t cheap, and GDDR6 even less so, so both vendors are using VRAM capacity as product differentiators and to upsell their better cards. But as VRAM capacity in the $150-$200 price range has been pretty stagnant for the last couple of years now, I do have some concerns about the long-term implications for 4GB cards, especially with the next-generation consoles set to launch in a year’s time. With the consoles setting the baseline for most multiplatform games, it’s a reasonable bet that VRAM requirements aren’t going to stay put at 4GB much longer.

Unlike AMD, the situation isn’t quite as black and white in the NVIDIA ecosystem, as NVIDIA doesn’t offer an 8GB GTX 1650 Super – or even an 8GB GTX 1660 series card for that matter. So the answer can’t just be “buy the 8GB card” like it is with the RX 5500 XT. Still, along with offering better performance, the GTX 1660 cards and their 6GB of VRAM stand a better chance of delivering solid, unimpeded gaming performance in a year or two’s time. At the end of the day, I don’t think any 4GB cards are a great choice right now; if you can afford to go higher, you should. 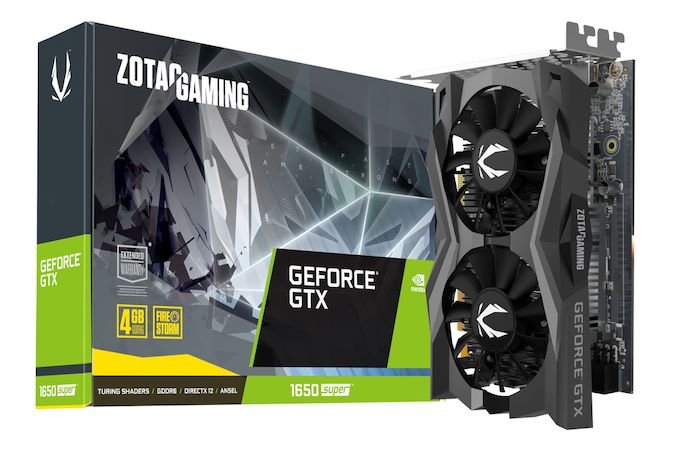 Finally, we have the particularities of Zotac’s card, the Zotac Gaming GeForce GTX 1650 Super. Zotac is one of NVIDIA’s most regular and reliable partners, and it shows, with the company producing a card that may just as well be the official GTX 1650 Super reference card. It is as good of an example of the baseline GTX 1650 Super experience as one could hope for, right on down to the fact that it’ll fit into virtually any PC.

But like it’s predecessor, the original Zotac GTX 1650, I remain unimpressed with the coolers on Zotac’s GTX 1650 series cards. We have seen and tested other similar double-slot cards before that are quieter, including cards from Zotac. So for the Zotac GTX 1650 Super land among the loudest of our low-end cards is unfortunate. While I admire Zotac’s commitment to making such a small card, I can’t help but think that, if nothing else, a single, larger fan would have fared better. Low-end cards are always a design challenge in terms of profit margins, but I think there’s room here for Zotac to do better, even for a baseline card like their Gaming GTX 1650 Super.