While all previous versions of the OS were based on Windows XP SP1, Media Center Edition 2005 is built on Service Pack 2, but with a few additions. There's obviously the built in Media Center application, but there is also a new XP theme called Energy Blue, as well as a few new programs that are automatically installed: Windows Audio Converter, Windows CD Label Maker, Windows Dancer and Windows Party Mode.

Windows Audio Converter is a program that will let you convert mp3, wav and wma files into mp3, wma, wma (vbr) or wma lossless formats. The most interesting option is the lossess Windows Media Audio format employs a lossless compression ratio to get the bit rate down as low as possible without actually discarding any of the original audio data. 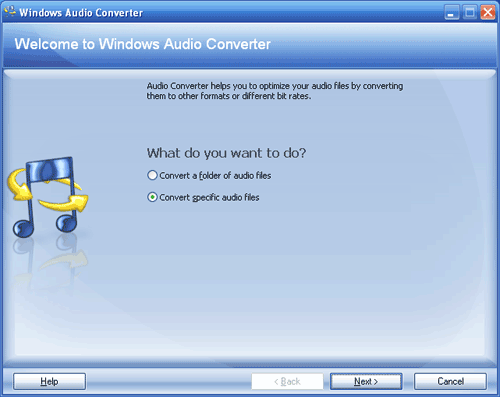 Windows CD Label Maker is pretty straight forward, it is a program that will let you make and print CD Labels, furthering the idea of using your MCE PC as a multipurpose "media center" of your digital life.

Windows Dancer is a program that will cause a little person to dance around on your screen. By default you can set Windows dancer to dance according to the music being played (although MCE 2005 only ships with one dancer, there is an option to automatically choose the dancer based on what type of music is being played). If you really enjoy the dancer you can even turn her loose without any music playing. We didn't like her enough to do that. 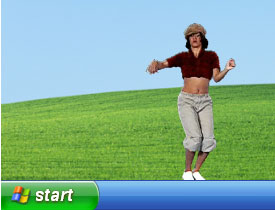 The final "Digital Media Enhancement" app that Microsoft ships with MCE 2005 is Windows Party Mode. Windows Party Mode is basically a full screen skin for Windows Media Player 10 that you're supposed to use at parties where everyone can come up and interact with the playlist, choosing what they want to hear next from your WMP10 Library. The skins available are far less polished than what's offered in the actual Media Center UI, but we can see how the feature would be useful in some situations. 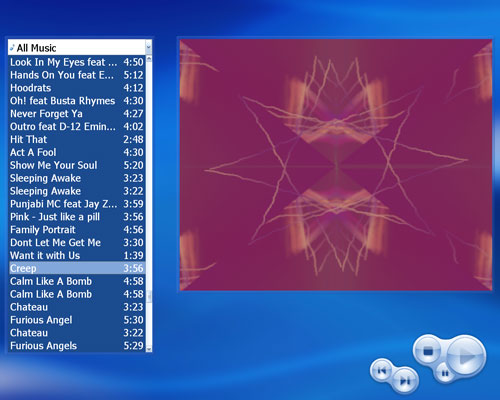 MCE2005 is configurable to start with or without the Media Center interface, by default it is configured not to but changing it isn't a problem. Below we have a screenshot of the new XP theme, Energy Blue: 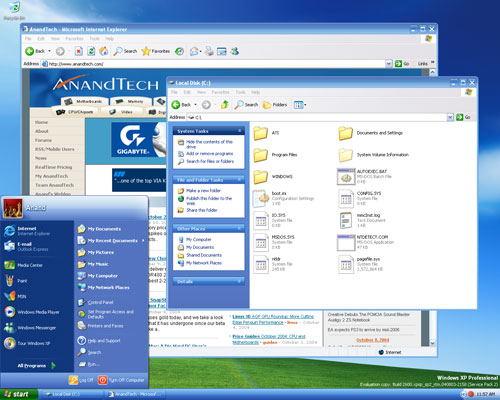 Launching the Media Center application is the same as before, you either use the green button on the remote or click on the green icon that looks like the aforementioned button. Regardless of which method you choose, the end result is that you're dropped into a fairly familiar interface. 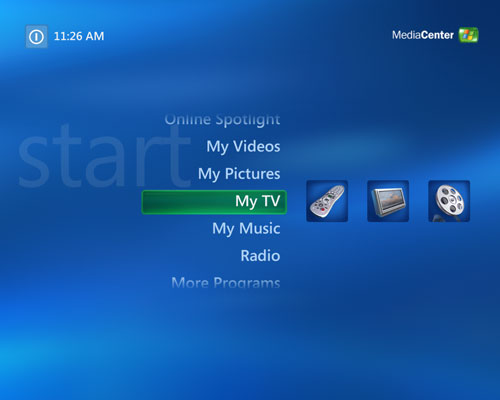 The Media Center interface, My TV is the default selection