Battery life of the Pixel 4 series was a concern from the very first moment we had confirmation about the phone having a 90Hz panel, yet doing nothing special or even regressing in terms of the battery capacity of the two models. I put the Pixel 4 XL through the paces in all three display modes, testing the battery life at 60Hz, 90Hz auto, and 90Hz forced refresh rates. 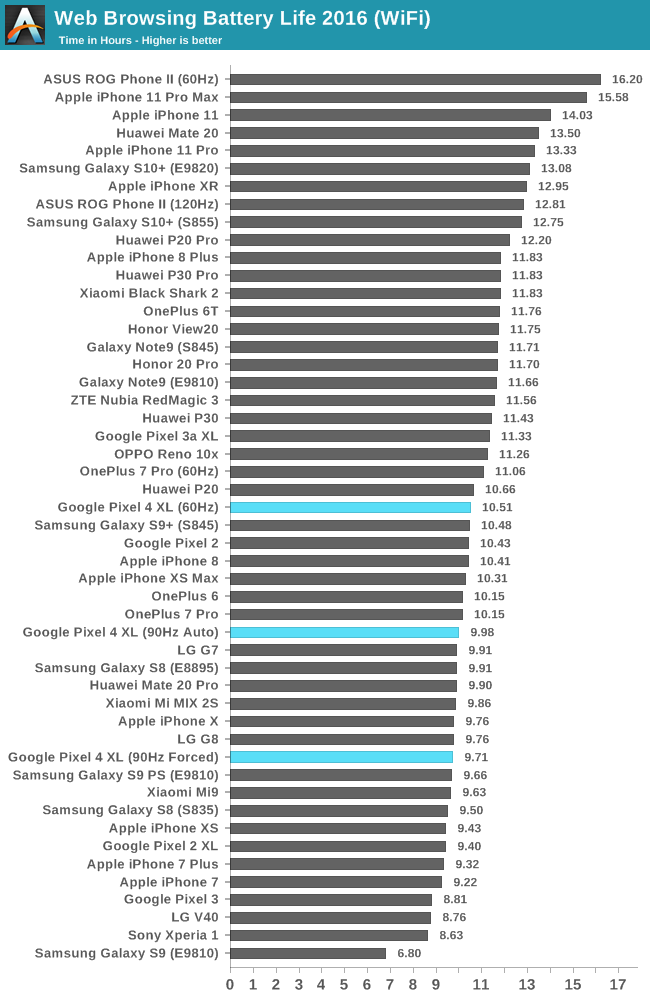 Unfortunately, as expected, the results aren’t too fantastic. The device that we should be comparing things to is the OnePlus 7 Pro – both devices feature 1440p 90Hz displays with the same SoC, it’s just that the Pixel 4 XL has a smaller battery at 3700mAh. While the Pixel 4 XL is lagging behind the OP7Pro, the interesting thing is that Google’s 90Hz seemingly uses less of a power hit than OnePlus’ implementation, degrading by 7.7% versus 8.7% when comparing full 90Hz versus 60Hz.

Given the results and the fact that Google dual-sources with LG, I very much doubt the Pixel 4 XL is taking advantage of Samsung’s newest more efficient OLED emitter generation which is said to be 15% more efficient. 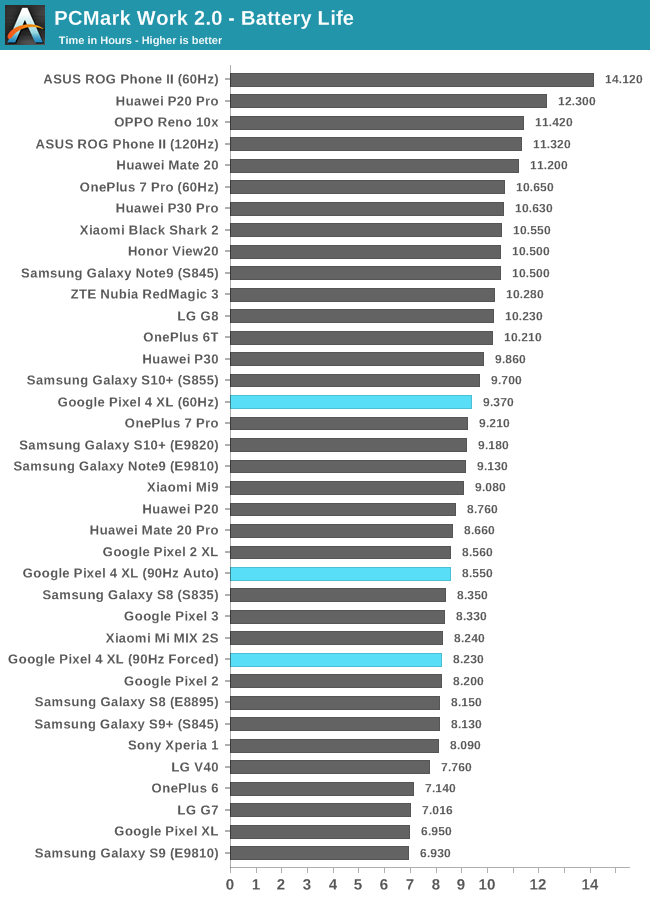 In PCMark, the results are also average to bad. 60Hz to full 90Hz incurs a 12.3% penalty, which is again slightly less than the 13.6% of the OnePlus 7 Pro. Naturally we can’t come to a conclusion of saying Google’s 90Hz is more efficient, maybe OnePlus’ 60Hz power management is just better implemented.

Overall, the Pixel 4 XL’s battery life isn’t very competitive. It’s amongst the worst results we’ve had for a 2019 device. I have to be accountable to myself here as whilst the phone has worse battery life than the OP7Pro, it’s not that much worse. Having said that the OP7Pro battery life was still completely useable, the Pixel 4 XL is also still very useable as it is. The problem again is that the Pixel came 6 months later, and in the face of a new iPhone generation which brought immense leaps in battery life, the Pixel 4 XL doesn’t seem to be that wise a purchase.

I really find it unfortunate that we weren’t able to test the battery life of the smaller Pixel 4. This model’s 2800mAh battery is 25% smaller and also comes with the wildcard of having an LG panel which historically have always been less power efficient. I can easily imagine that the battery life of that model is outright disastrous, and given coverage by other reviewers, it seem this would be an apt description of the situation.